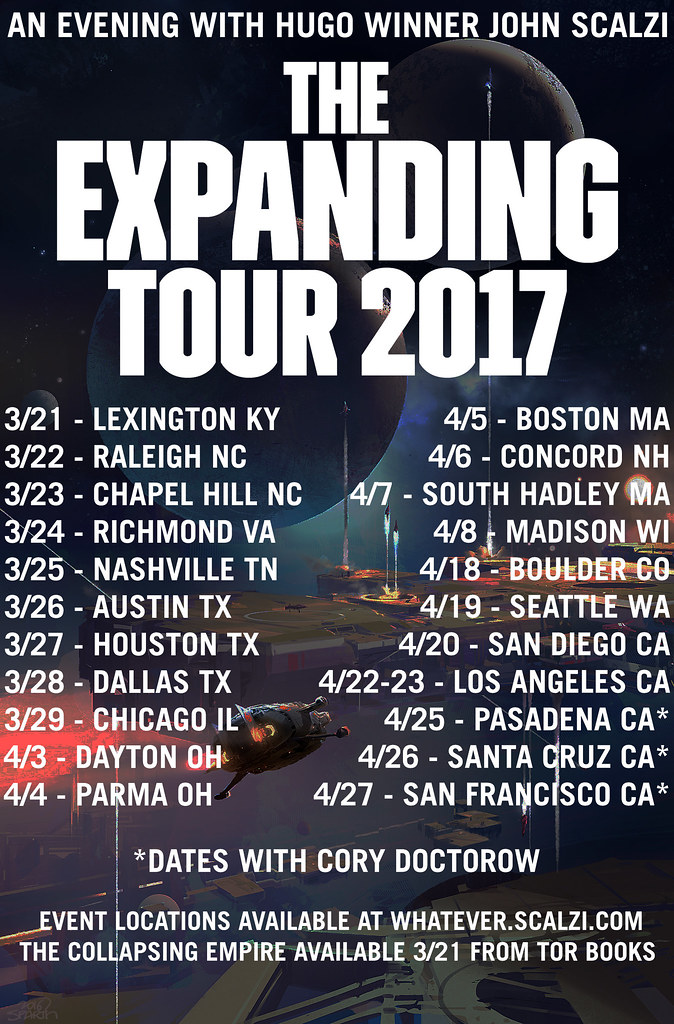 It’s now officially announced: My tour dates for The Collapsing Empire! I’m calling this one The Expanding Tour 2017, and here are the venues (follow the links for times and details):

Saturday, April 8
A Room of One’s Own and the Wisconsin Book Festival, at the Madison Public Library
Madison, WI

In addition I will be doing three dates with Cory Doctorow:

So that’s 24 cities over five weeks. That’s a lot!

Now to answer some of the usual questions:

Why aren’t you coming to [Insert Town Here]?

Because as ever, I go where where we receive requests (by bookstores and libraries) and there are only so many places I can go while on tour. There are as usual new places — four new cities I’ve never visited before! — but as always we’re going to miss some places. There will be other tours; let your local bookstores know you want to see me.

Also, I will be doing a number of other events in other cities in 2017, so if your city isn’t here, I still may show up in it at some point (for example, I’ll be in NYC in early June). Stay tuned for more information on those appearances.

Are the events free to attend?

Most are but some aren’t. Some stores have ticketed events, which means you have to RSVP. Please RSVP in those cases. Some stores will also require you to purchase the book at the store if you want to get the book signed. And in at least one case, you’ll need to buy a ticket (good for admitting two) that includes a copy of the book.

In each case, click on the links above for details or (if details are not up on the site yet) call the store and ask.

I’m fine with it but check with the store. That said, and I can’t stress this enough: If you’re coming to an event at a bookstore, please buy something at the store. Typically my book (especially if the purchase is required in order to get in the signing line), but honestly any book would do. Support your local bookstore, please!

May I give you a gift?

You may but understand that I will be unlikely to travel with it; I will probably ask the store to ship it to me. This is because I travel very light (it’s a long tour) and don’t have much space to carry things. If you bring me edible things (cookies, etc), I’ll likely snack on them back at the hotel room. Please do not poison me.

On tour events I will usually read something exclusive to the tour that no one else but people who see me on tour will hear (likely a selection from an upcoming work), and then a couple of shorter pieces, and then a question and answer session followed by a signing. My events are usually PG rated; there might be some adult themes and light swearing but nothing too out there.

If I bring a ukulele will you sing a song?

Yes, people bring ukes to my events, and yes, I will sing a song (or at least part of one) if someone brings one. BUT: Make sure it’s tuned! If the uke is out of tune I can’t use it; nothing stops an event like me trying to tune a uke for five minutes.

Hey, will you come and hang out with us after the event?

Probably not, but not because you’re not fabulous people. It’s because I usually have to get up at an ungodly hour the next morning for the next stop on my tour and/or because I already have a previous commitment with friends, whom I’ve already scheduled with. I promise you’ll get a full dose of me at the event.

I have another question you have not answered here.

Ask it in the comments!