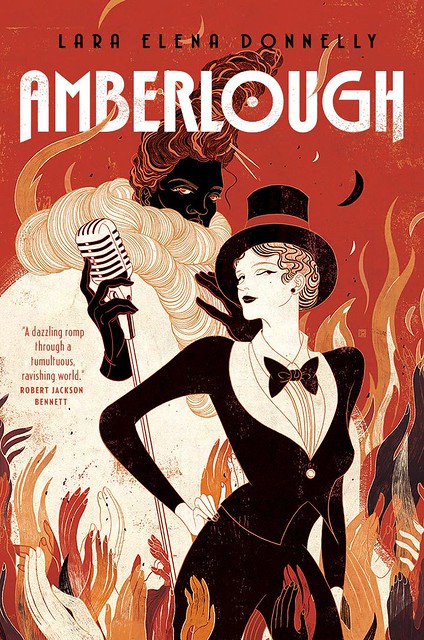 Difficult times are complicated, not only for themselves but what they do to people — who are themselves complicated even at the best of times. Or so Lara Elena Donnelly might argue, both here in this Big Idea piece, and in her novel Amberlough. Is she correct? Read on for her argument.

Amberlough is not a book filled with characters whose moral conviction burns like a fire. These people aren’t going to end up on the right side of history. They’re criminals and collaborators. They commit a multitude of sins from infidelity to murder.

But are they bad people?

It’s a book set in a socially-diverse and democratically-governed country, but that government is riddled with corruption. Exploitative taxation maintains an unequal economic status quo. A nascent fascist movement promises to end corruption, end unfair taxation. The movement’s only price is social conformity.

Which political option is better? Which is worse?

Ambiguity has been a central theme of Amberlough from its inception. It began life as a short story about a city auditor in love with an emcee, in a city sliding inexorably into the grips of a repressive regime. But even as the newspapers showed fascist flags unfurling from capitol buildings, even as police made violent arrests and the government came down hard on vice, the glittering nightlife roared on. People had a good time, got high, got laid. The story existed in a nebulous area between hedonism and totalitarianism.

But in the first draft, the main characters fell utterly flat. Their straightforward love story felt unrealistic in that setting. In the next draft—the one that sold; my first published piece of fiction!—I realized they couldn’t approach their relationship so simply.

When I asked those questions, lines blurred. Love became awkward, unwanted, an inconvenience, a trap. The story was still a romance, but the “happily ever after” was called into serious question.

The origins of Amberlough stemmed from another short story, too (I was thinking of writing a series.): a theatrical manager turned informant, trying to protect his cast of satirists, queer folk, women, dissidents, and weirdos by selling out other people, earning the goodwill of evil men and another day of dubious safety.

That short didn’t work. The scope was too large to fit into 10,000 words or less. And part of what made it so big was multifaceted reactions from a cast of characters in the midst of an intricate political situation.

Emotional complexity is completely doable in short fiction—in fact, it’s vital. But when emotional complexity is built on events years in the making, when it’s reliant on shifting public opinion and government policy, when it’s extrapolated from characters’ various reactions to those shifts, you need room to flesh it out. The  book got bigger and the spectrum between black and white blurred further to accommodate even more gray.

No one is morally pure in this book. Blackmailed into a corner, secret agent Cyril DePaul turns into a fascist collaborator, sacrificing thousands of lives for his own, and for the slim hope he can save his lover, cabaret emcee Aristide Makricosta.

Aristide, who has hauled himself out of bitter rural destitution on a ladder of sex and ruthlessness, is a blackmarket kingpin who sells drugs, arms, and stolen goods. He’s a man who has finally created an identity for himself that fits, even if he’s done it on the backs of others. He’s a man who will help just about anybody in a tight spot, but never out of the goodness of his heart. Except for Cyril, and maybe Cordelia Lehane.

Stripper and small-time drug dealer, Cordelia doesn’t double-deal and she doesn’t play puppet master. But she breaks hearts and she hurts people who love her. Her mother died of an overdose but she sells narcotics to pay rent. Initially, she’s complicit in Cyril’s collaboration, until the consequences of the new regime strike her personally.

Everyone has good intentions; they all end up hurt. Everyone is selfish, but only because they value their lives and the lives of people they love.

Part of me is ashamed that my view of humans is so cynical: that this tangle of secrets, confusion, and crossed purposes feels more vital, more genuine to me than a short story about true love conquering adversity. But another part of me revels in the messiness of people and their contradictions. We can love someone who hurts us, or hurt someone we love. Sometimes in seeking to do good, we do great evil, or vice versa. We are strange and imperfect and fascinating creatures, and fiction is richer when it explores our ambiguities.

← In Which the Eternal Question of “What Would It Sound Like If Morrissey’s ‘Every Day Is Like Sunday’ Was Covered as Dark Ambient With a Cookie Monster Singer?” Is Answered
Announcing The Expanding Tour 2017! 24 Cities! Five Weeks! →