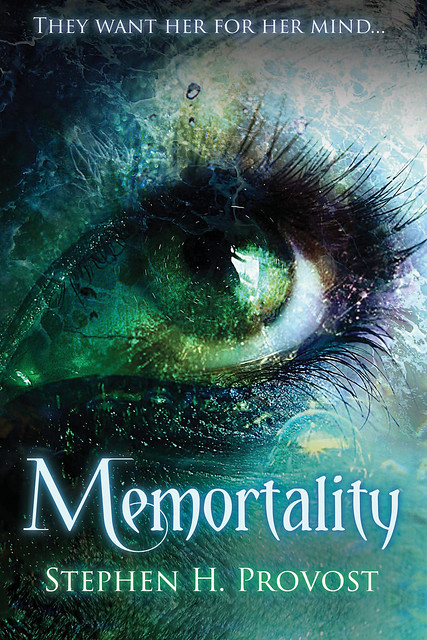 It can happen that writing a book of one sort can be the genesis for a book of another sort entirely: Writing a non-fiction book inspired Stephen H. Provost to have a big idea for a fictional tale, one that developed into his new novel Memortality. Here’ he explains how he got from the one to the other.

I’m sure you’ve wondered what it would be like to bring someone back from the dead. Who would you bring back?

And what would happen then?

These questions inspired me to write Memortality, the story of a young woman named Minerva who uses her uncanny memory to reconstruct people’s lives – to literally bring them back from the dead. But there’s a catch: She has to keep remembering them, or they’ll slip back into the afterlife and become lost to her forever.

Minerva discovers her gift when her childhood friend Raven, killed in a car crash fifteen years earlier, suddenly materializes out of a dream. He helps her learn to use her gift – which makes her the target of a top-secret government agency and a rogue operative seeking to use it (and her) for their own purposes.

That’s the Big Idea behind Memortality. I wanted to write a new kind of paranormal adventure without any of the usual suspects: vampires, zombies, werewolves and the like.

It’s a paranormal tale, action/adventure and psychological thriller rolled into one, with a dash of romance thrown in. The concept is pure fantasy, but it was inspired by the real-life stories I’ve been telling for thirty years as a journalist and a writer of historical nonfiction.

Most recently, I wrote a history of my hometown (Fresno Growing Up) in 2015, and a book on the history of U.S. Highway 99 that’s due out in June. As I was working on these projects, I realized my number one goal was to bring the past to life. I was doing much more than reciting dead facts; I wanted to create a form of virtual reality and project it onto the mind’s eye. I wanted my readers to feel as though they were experiencing the events as I described them, through the power of shared memories.

Then it occurred to me: What if someone could literally do that? What if someone had the power to reconstruct the past, to make it tangible, through the power of memory? Such a person would have to have a perfect memory – or as close as you could get to one: an eidetic or “photographic” memory. Then she would need a psychic gift that could re-create the subjects of that memory in the here and now.

That’s how Minerva Rus was born.

As a character, Minerva’s a bit like me: a loner who spent a lot of time in her room as a teenager, reading voraciously and creating her own worlds to explore. I do that now as a writer, so not much has changed – although I do venture out into the sunlight more these days.

But in terms of inspiration, Minerva owes more to my mother than to me. If I could bring anyone back from the dead, she’d be the one. During my own adolescent “dark ages,” she was the one person I could confide in, and she’s still the person I admire most, even though she’s been gone more than 20 years.

Mom was unique. She was unlucky enough to be hit by the polio virus as a teenager, just a year before the vaccine came out. Her doctors put her in an iron lung and gave her a 50-50 chance of living; regardless, they said, she’d never walk again.

But she was determined, even though her entire right side was paralyzed as the result of her illness. Not only did she survive, she managed to climb three flights of stairs every day at UCLA and earn a bachelor’s degree. Then she got married and had a son (yours truly) – something else she wasn’t supposed to be able to do.

Ever since I can remember, I’ve been drawn to underdogs: to people who don’t fit in with society’s expectations, who are shunted to its margins but who have a unique gift to offer if the rest of the world would just pay attention. I revel in the underdog’s triumphs, whether it be in athletics, in life or in fiction. I grew up reading fantasy, with its reluctant heroes and epic quests, and watching explorers like Kirk and Spock go where no one had gone before. I became absorbed in stories of misunderstood superheroes like the Incredible Hulk, the Amazing Spider-Man and the Uncanny X-Men.

In a way, Minerva is very much like one of Charles Xavier’s mutants, trying to master a gift that delivers her from society’s disdain … and gives it another reason to spurn her.

The theme is a familiar one, but it inspired me to explore new possibilities as I wrote. I delved into everything from history to mythology to time travel and the depths of the human mind – a blend that led my publisher to describe Memortality as “a genre-breaking new contemporary fantasy.”

It’s hard to find an original idea these days, especially in a market that thrives on reboots and retreads. But as an explorer, I take that as a challenge: I want every story I write to be new and intriguing. I don’t want the reader to know exactly what’s behind the door before it opens. Mysteries, twists and surprises are part of what makes the journey fun.

I certainly had fun writing Memortality. I trust Minerva had fun living it. I hope you have as much fun reading it.