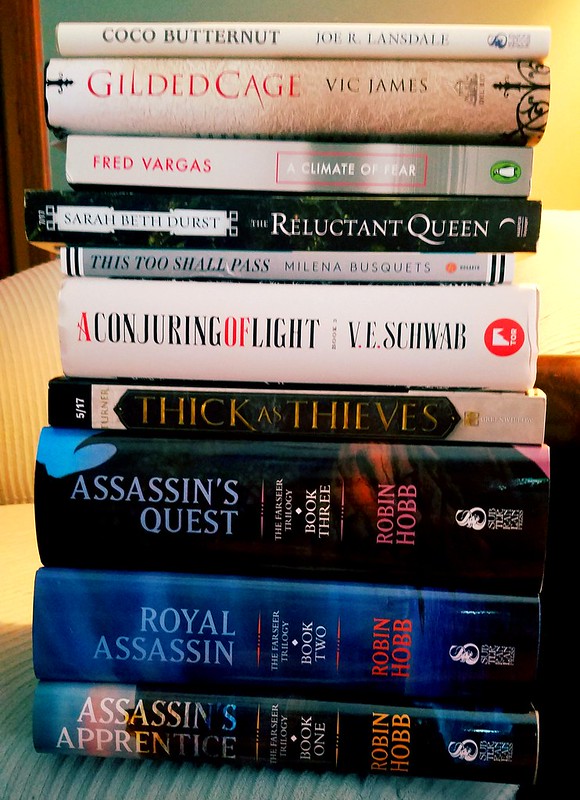 As we move into the weekend, here’s another stack of fine books and ARCs that have recently come into the Scalzi Compound. Which of these titles moves you? Tell us all in the comments!

Hey, Scalzi! It is I, your fake interlocutor! I wish to ask you about your thoughts on Trump and the news this week!

I’m at this place where I do want to talk about what’s going on with our government, and at the same time I don’t, because it’s fucking tiring and depressing to think about for longer than a tweet.

Well, you have been tweeting about politics a lot.

Exactly — bang out 140 characters, say something snarky, and then bug the hell out. But, fine, let’s talk about stuff in a slightly-longer-than-tweet form.

Fine. It’s not surprising for me for two reasons. One, because the executive order was so sloppily constructed, and so clearly targeting Muslims as Muslims, that the constitutional issues with it were obvious to even a layman such as myself (Also, pro tip: If you don’t want your executive order limiting travel from seven Muslim-majority countries to be seen as an actual ban on Muslims, maybe don’t call it a ban when you tweet about it and maybe don’t have one of your pals brag about how cleverly you made a ban on Muslims without actually saying “DUDE THIS IS SO TOTALLY A MUSLIM BAN” in the executive order itself).

Two, because the administration’s argument to the 9th Circuit vis-a-vis the executive order was basically “not only should you pretend that Trump and his pals never said this was a ban elsewhere, but you shouldn’t even be able to review the constitutionality of this executive order for reasons,” followed by an attempted Jedi handwave designed to block the memory of the Constitution and two centuries of precedent regarding judicial review. Unsurprisingly! This did not work! Nor should it have. And now as a result, we have a circuit court very firmly on the record as saying that the Trump administration’s attempted rule by executive order is not going to be the fast track to blithely uncontested authoritarianism that they hoped it would be.

What about the Supreme Court?

They could overturn the 9th!

Yeah, but they probably won’t. Even if one were to assume a standard ideological split (which I wouldn’t in this case but even so), it would be 4-4, and in the case of ties, the lower court stay would stand. But in this particular case, if SCOTUS takes it up at all, I think it’s more likely to see a 6-2 or 7-1 or even (really unlikely because Thomas is Thomas but still) a unanimous ruling because, again, one substantial part of the Trump administration’s argument is “the courts shouldn’t be able to review executive orders” — or at least this one, because national security, harumph harumph. I don’t see the Supreme Court, the highest judicial platform of our nation, saying, “oh, right, we shouldn’t do our job,” especially when told this by the nincompoops of this administration, and especially with such a bullshit, poorly-constructed executive order like this one, and especially especially when the administration’s evidence that this executive order is necessary for the protection of the nation is “trust us on this.” I mean, these motherfuckers literally cannot find light switches in the White House conference rooms.

So, really, no. I don’t see the Supreme Court siding with the Trump administration on this. Nor should they.

You’ve been wrong before.

Speaking of the Supreme Court, any thoughts on Neil Gorsuch?

Uuuuuhhhh, he’s probably the best-case scenario for the Supreme Court in this particular adminstration?

But how can you say that? He’s a conservative!

I don’t know how to break it to you, but we elected a GOP president. Also, I’m not saying he’s my choice for the Supreme Court. What I am saying is that we’re goddamned lucky Trump didn’t offer up someone from his own stable of cronies, because he doesn’t know anyone else. Gorsuch appears to be a solid, legit choice for the Court, who I am very sure will take sides on rulings that I will be entirely unhappy with.

Garland should be on the court, yes. He’s not. He’s not going to be.

The Democrats should block Gorsuch! Just like the GOP blocked Garland!

I don’t think that will be possible in the long run, and I think the nation is generally best served with the Court at full capacity. If they want to try, I don’t think it’s going to hurt them much, politically. But the Democrats are also in the minority in the Senate, which I suspect matters.

What do you think about Gorsuch’s “Fascism Forever” club in high school?

You know, when I was in high school, I put out a flyer for “The Elitist Club,” which I meant as a joke, but which some kids at my school signed up for, because they didn’t know it was a joke. It was an obnoxious bit of humor on my part, but that was it. Knowing that about my own past as a smug teenage dude, I’m willing to cut Gorsuch a little slack for being an asshole back in the day; his club name was even more obnoxious than mine, but as far as I know he wasn’t in fact goosestepping around the quads as a kid.

Also, as a general rule, barring actual criminal activity or an active thread of asshole behavior from then to now (see: Ted Cruz), I’m usually willing to say what happens in high school and college stays there. I did a lot of asshole things in high school and college myself; I don’t know that they’re entirely indicative of who I am as a 47-year-old person engaged in the adult world.

Thoughts on the cabinet hearings?

But DeVos! And Sessions! And Price in the middle of the night!

The fact Mike Pence had to drag his ass over to Capitol Hill to push DeVos over into the win column is a pretty substantial thing. I would have preferred her not getting the nod, but all things considered this was a decent showing by the Democrats. Likewise Sessions, for which there was only one defection, and the vote on Price was similarly lopsided. I don’t think that vote happening in the middle of the night matters for anything, incidentally; the vote totals wouldn’t have changed, and it’s not like people didn’t find out in the morning.

Anyway, look: The Democrats are in the minority right now. If they held the Senate, things might be different, but they don’t. Be happy they seem to have found their spines. Their spine-finding is going to be important over the next few years, especially because, if memory serves, 25 of them are up for re-election in ’18.

Okay, time for some quick takes.

Flynn talking to the Russians about sanctions?

Stupid, possibly illegal, and in any other administration would be grounds for him to be removed. He will not be removed.

Really stupid, definitely against the rules, and in any other administration would be grounds for her to be removed. She will not be removed.

Spicer lying his motherfucking ass off all the time in the press room?

Also appallingly stupid, not against rules, but again in any other administration he’d be fired. And he might eventually be fired because apparently Trump doesn’t like him much! And I suspect that on that day, he will say thank you Jesus to himself and then wander off to be a talking head and write a memoir.

I will note that of all the people in the administration, I feel sorry for Spicer the most — I think he has a thankless task where people like Flynn and Conway (and DeVos and Sessions, etc) are actively malign. But on the other hand, he took the job, so I only feel a little sorry for him, and less so every single time he opens his goddamn lying mouth.

Man, don’t get me started on that racist piece of shit right now. I will be here all day.

This is a thing that’s going around, I know. One, I’m nowhere near qualified to make an assessment; two, you know what? I don’t want to give him an excuse for being such an awful president. Unless definitely shown otherwise by medical experts, I am going to assume that Trump is both in complete charge of his faculties, and a historically awful president.

Is Trump the Worst President Ever™?

I still hold that spot for James Buchanan, who broke the country in a way that required fighting a war to fix, and also we’re still just three weeks into this administration, so it might be a little early for definitive pronouncements. But it’s also pretty clear that just three weeks in, if Trump is not the worst president since Buchanan, it’s not for lack of trying. His administration is hopelessly corrupt, he’s incurious and a bigot, his advisers are motherfucking white nationalists who aren’t even trying to hide that fact, and he literally has no idea what he’s doing.

In a way it’s exhilarating! Because this administration is entirely outside the experience of anyone, ever — it’s never been this bad, this fast. But then, it’s easy for me to say it’s exhilarating, since I’m one of those people who will be the last to be affected by the immense damage this administration has the potential to cause, and is indeed already causing. Let’s face it: Trump and his party pals are all in for me, Mr. Straight White Rich Dude, whether I want that or not. It’s everyone else they’re screwing, especially if they have a skin shade darker than my own fish-pale pallor, and even more so if they’re Muslim.

Do you have advice for anyone following politics these days?

Last time you wrote on Trump you said you were strangely optimistic. Would you care to revise that statement?

Nope! Three weeks in, as many people want to impeach this asshole as don’t, his unfavorables are up, and GOP congresscritters are literally running away from their constituents, who are angry as hell with what’s going on. Again — Trump and the GOP are in power right now and there’s nothing that can change that in the short run. But in the last week it appears the courts are willing to put on the brakes, the Democrats in Congress are willing to stand up (just a little!) and people are ready to confront the government. Life is not optimal. But it’s better than it would be if everyone was rolling over and just talking it.