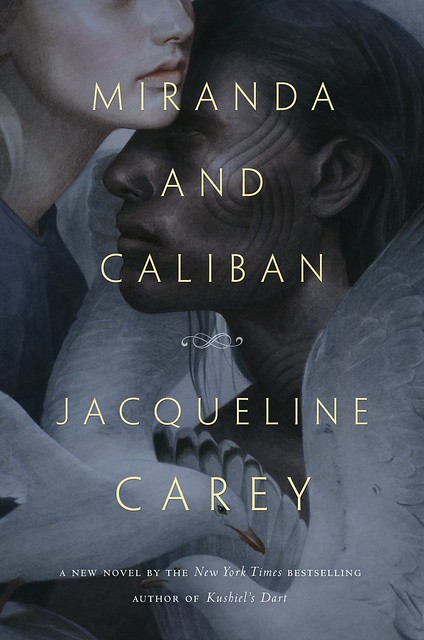 Shakespeare is a font of inspiration for writers, not only for the words he put to paper, but for the worlds built around the words. For her new novel Miranda and Caliban, Jacqueline Carey explores the world of The Tempest, one of the bard’s greatest plays. What does she find there? Here she is to tell you.

In William Shakespeare’s The Tempest, the action of the entire play unfolds over the course of a single day. But what happened in the twelve years on the island leading up to that day? Why does the magus Prospero keep his daughter Miranda ignorant of her history? Why does he take the supposedly monstrous Caliban under his wing, and keep him there after Caliban attempts to rape Miranda?

Telling the story of those twelve years and answering those questions was my Big Idea.

From the beginning, I had a strong sense that this story ought to be told in the alternating narrative voices of the two characters in whom I was most interested, Miranda and Caliban.  I also wanted to work within the structural confines of Shakespeare’s text, which presented an immediate challenge, as we’re told in The Tempest that Caliban didn’t possess the gift of language until Prospero and Miranda taught it to him. But challenges are interesting things, because they force you to stretch and grow as a writer.

I envisioned my Caliban as we first encounter him not as a grown man, but a “wild boy,” as Miranda calls him; essentially, a feral child born on the island and left to fend for himself after the death of his mother. In the course of researching children raised without human contact, I learned that children who had acquired language skills prior to their isolation were in some cases able to reacquire them.

This, then, determined the arc of my two narrative voices. Over the course of the book, Miranda grows from a precocious, tender-hearted six-year-old girl to a frustrated young woman grappling with adult issues she hasn’t been given the tools to understand, and her voice reflects this evolution. By contrast, Caliban’s voice emerges in a halting and tentative fashion, at first a mere handful of words repeated in a rhythmic manner. At times in The Tempest, he sings ditties to himself and I chose to incorporate that element, giving his evolving narrative voice a singsong quality laced with guttural and susurrant notes, a tendency toward onomatopoeia, and an inconsistent grasp of grammar and tense.

I gave him desire.

I gave him anger, too.

Once you start delving under the surface, there are a lot of ideas to be unpacked in The Tempest. Many scholars believe that Shakespeare was influenced by the essays of Michel de Montaigne, one of the early proponents of the “noble savage” notion of humanity, which provided one motive for Prospero’s academic interest in Caliban, a figure raised without the benefit—or taint—of human civilization.

Speaking of Prospero, the nature of his magic was another one of the greatest challenges this book presented me. Although the magus is a distant, cold and controlling character in my vision, I wanted to offer a genuine depiction of a Renaissance magician, so I immersed myself in the study of Renaissance magic.

That shit is mad complicated, you guys.

And the complex chemistry and detailed mathematical calculations involved in alchemy and astronomy don’t lend themselves to good storytelling, so I chose to focus on the one element of Renaissance magic that offered the most vibrant symbolism—the depiction of specific images representing the decans of the thirty-six degrees of the Zodiac utilized to evoke celestial correspondences.

See what I mean?

But it was a decision that allowed me to give my Miranda greater agency within her own story. I made her an artist, a painter, a keen observer of the natural world, able to translate the image of a slit-eyed goat into a proud-necked horse, of a hissing and coiled serpent into a defiant and foot-trodden dragon.

That, she does not know.