The Collapsing Empire Review in Booklist + Chapters One and Two (and Soon Three) On Tor.Com 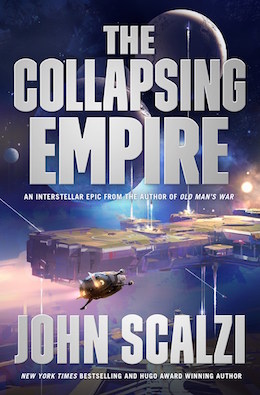 So! Here’s what’s news in the land of The Collapsing Empire:

1. A review of the book is up from Booklist, and it’s pretty great. Here’s the bit I especially like: “Fans of Game of Thrones and Dune will enjoy this bawdy, brutal, and brilliant political adventure”. It also praises my “well-known wit, whimsy, and ear for dialogue that is profane and laugh-out-loud funny.” I will accept both of those statements!

2. But don’t just take Booklist’s word for it. Tor.com, having previously published the prologue to The Collapsing Empire, has also published the first two chapters of the book: Here’s Chapter One, and here’s Chapter Two. Chapter Three will be up tomorrow. Happy reading!

3. The Collapsing Empire book tour is already pretty extensive — 22 dates over five weeks — but it may soon be getting even more extensiver! (Note: “extensiver” is not a real word.) We’re currently negotiating adding at least one more date to the tour. When/if it gets locked in I will let you all know. It should be soon now.

22 Comments on “The Collapsing Empire Review in Booklist + Chapters One and Two (and Soon Three) On Tor.Com”