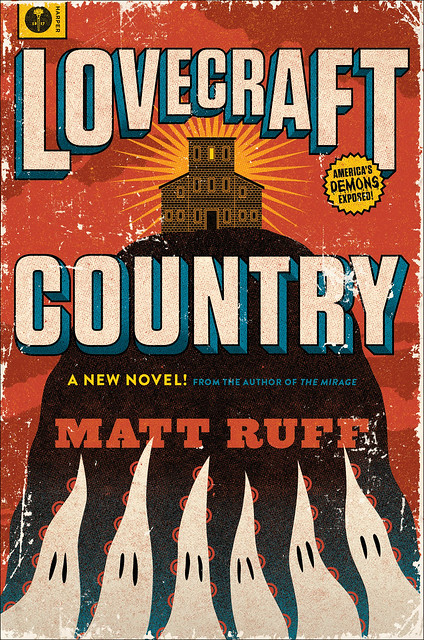 Books are often turned into television series — but what about stories going to the other direction? As Matt Ruff shows you in this Big Idea for Lovecraft Country, stories intended for one medium sometimes find their full flower in another entirely.

Lovecraft Country started out as a TV series pitch. The big idea was to create a show like The X-Files, in which a recurring cast of characters had weekly paranormal adventures—only instead of being white FBI agents, my protagonists are a black family who own a travel agency in 1950s Chicago. The agency publishes a quarterly magazine, The Safe Negro Travel Guide, that lists and reviews hotels and restaurants open to black customers. (Such travel guides actually existed during the Jim Crow era, and contrary to what you might expect, they were most useful to travelers in the northern and western U.S., where discrimination was just as common as in the south but explicit “Whites Only” signs were rarer.)

My lead character, Atticus Turner, is a 22-year-old Army veteran who works as a field researcher for the Guide. Atticus is also a nerd whose familiarity with genre fiction comes in handy when things start to get weird, as they do: It turns out Atticus is the last living descendant of Titus Braithwhite, an 18th-century wizard and slave trader who founded a cabal called the Order of the Ancient Dawn. Now the modern incarnation of the Order has plans for Atticus.

In addition to occult forces, Atticus and his family have to deal with the more mundane terrors of American racism, such as sundown towns. Lovecraft Country’s title is a nod to this duality of horrors—H.P. Lovecraft being known for both his tales of cosmic dread and his embrace of white supremacy.

While transforming my original idea into a novel, I kept the structure of a season of television. The long opening chapter, like a two-hour pilot, introduces the main characters and sends them on a dangerous cross-country journey. Each subsequent chapter offers a self-contained weird tale—a “monster of the week” episode—starring a different member of Atticus’s extended family. In “Dreams of the Which House,” Atticus’s friend Letitia buys a haunted house in a white neighborhood and has to play the dead off against the living to keep what’s hers. In “Abdullah’s Book,” Atticus’s uncle George enlists his Freemasons’ lodge to stop an ancient treatise on magic from falling into the wrong hands. In “Hippolyta Disturbs the Universe,” Atticus’s aunt discovers a portal to another world. In “Jekyll in Hyde Park,” Letitia’s sister Ruby goes home with the wrong guy and wakes up to find that she’s been turned into a white woman. In “The Narrow House,” a dead man forces Atticus’s father to revisit the 1921 Tulsa race riot. In “Horace and the Devil Doll,” corrupt Chicago police detectives use sorcery to terrorize Atticus’s 12-year-old cousin. All of these episodes fit together to form a larger arc story about Atticus’s struggle against the Braithwhite clan and the Order of the Ancient Dawn.

For me, Lovecraft Country demonstrates the real power of diversity in art. By focusing on people who were traditionally excluded from genre fiction, I’m able to do interesting new things with some very old tropes, while simultaneously exploring aspects of our shared history that aren’t as well-known as they should be. Combining fantasy with realism produces a richer story than would be possible with either alone. And despite being set sixty years in the past, this is easily one of the most topical books I’ve written—though that says less about my skills as an author than it does about the state of the country that I live in.