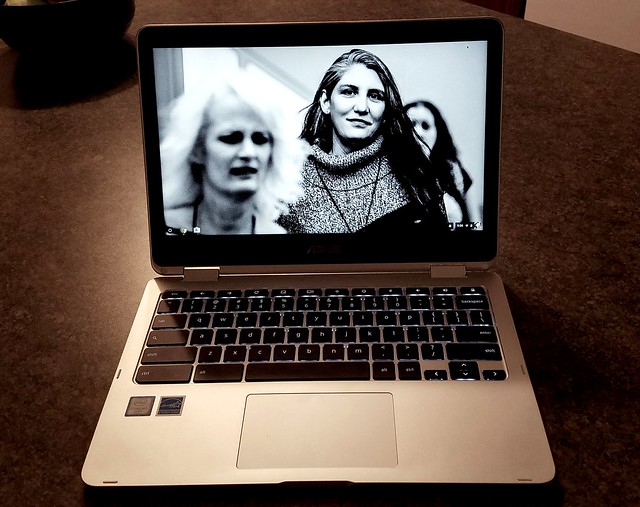 A couple of months ago I realized I was going to need a new laptop; the Dell XPS 12 I have, while still working perfectly well while plugged in, will only last for a couple of hours on battery — this is what happens to old laptops. I have a Chromebook Flip, which I actually really like, but it’s tiny (a 10-inch screen and a smaller-than-usual keyboard), and while it’s fine for short trips where I don’t have to do much writing, if I do have to write anything longer than an email or a short blog post, my hands get cramped quickly. What I really wanted was a another Chromebook Flip, just slightly larger.

Well, and that’s exactly what I ended up getting. The new laptop is the Asus Chromebook Flip c302, which has a 12.5 inch 1080p screen, a full-sized, backlit keyboard (which is actually hugely important to me), a relatively hefty processor for a Chromebook, good battery life and the ability to fold back into tablet format, all for $500. Like all Chromebooks, it’s largely dependent on one having a full-time connection to the Internet, but the one thing I really always need — a word processing program, here represented by Google Docs — is available offline too, so that’s fine. Also it like its smaller predecessor has the ability to run Android apps, many of which can also be used offline at this point. In short, it’s going to be able to do what I need it to do, nearly all of the time.

I did for a fair amount of time agonize between getting this or the new Dell XPS 13 2-in-1, which is roughly the same size as this and also has a tablet mode, but also has a more substantial processor and of course the ability to run Windows programs, including Word and Photoshop, both of which I use quite a lot. The deciding factors for me were twofold: One, the way I use my laptops typically doesn’t run toward using heavy-duty programs anyway (if I’m not using Photoshop, for example, I’m editing my photos on my phone, not my laptop), and two, this is two to three times cheaper, depending on which XPS configuration I got. I like that, not only because I’m cheap but because, having once had lost a fairly expensive laptop at the airport, and then (once I recovered it) having it stolen from me at another airport, I’m more comfortable traveling with a computer that I can afford to lose, or accidentally drop, or have eaten by bears, or whatever.

The Chromebook’s general need to be always connected was a drawback five years ago but honestly isn’t much of an issue now. My phone has a mobile hotspot so as long as I’m in the US it’s not like I ever don’t have a connection, and wifi is ubiquitous enough that you really have to go out of your way not to have it (and anyway, as noted above, the one thing I always need has an offline mode). In short, this is a computer that makes sense for how I work today.

Having now had it for a few hours, my general impression of it is pretty positive: The screen is pretty and bright (and 1080p is honestly perfectly acceptable in a screen this size), the keyboard is sufficiently large and easy to type on, and I’ve written pay copy on it, so it’s literally already paid for itself. If you’re a Chromebook fan, I can definitely recommend it (I’ll note I was considering between the c302 and the new Samsung Chromebook Plus, which spec-wise is very close to this computer, at around the same price. But the Samsung apparently doesn’t have a backlit keyboard, and that was the dealbreaker for me).

So, look! My new computer. If you see me on tour next month, you’ll see it too. Be sure to say hello to it.

My tour for The Collapsing Empire is already pretty long, taking place as it does over five weeks — and now it’s about to get longer! Because I’m showing up at two new places:

The Santa Fe stop is very definitely a formal stop for the tour and will include me having a chat with George RR Martin, of whom you may have heard. The Southfield stop at this point is far less formal; depending on whether there is space for me on programming, it may just end up being me hanging out in the lobby bar and signing books for people who wander by. Nevertheless, I will be there (and happy to sign books). So if you were planning to attend Penguicon already: Hey, bonus! If you weren’t already planning to attend Penguicon, well, maybe you should (P.S.: Cory Doctorow, with whom I will have shared the last few dates of my tour, is a Penguicon Guest of Honor this year, so there’s that too).

Beyond that, we’re in the process firming up additional dates via other conventions, book fairs and book festivals. I’ll let you know when those dates are confirmed and public knowledge.

Here’s the official tour page with all the current dates. Hope to see you out there!

Over at Inverse, writer Ryan Britt is annoyed that two of his favorite science fiction books of the year, Death’s End by Cixin Liu, and Babylon’s Ashes by James S.A. Corey, are not on the Nebula list of nominees for Best Novel. His argument for both basically boils down to they’re both amazing so they should be obvious nominees, obviously, which to be fair is the same general argument anyone makes when they complain about something they love getting what they perceive to be a snub for whatever award they think the thing the love should be up for.

Not to single Britt out — his is merely the complaint about this I’ve seen today, not the sole complaint out there — but to serve as a reminder, as we head fully into science fiction awards season: There’s no such thing as an automatic award nomination for anything, no matter how good you think that thing is. If you think there is, you’ll be finding yourself frequently outraged for no particularly good or useful reason.

Likewise, a thing you love not being on an award ballot doesn’t mean it was “snubbed”. “Snubbing” here basically means someone (or in this case more than one someone) actively going out of their way to keep a thing off the ballot, i.e., something along the lines of “I hate this novel and/or author so much I will instead recommend a different and possibly inferior book and encourage all my friends to do so as well.” It’s pretty much 100% certain this didn’t happen here; instead, people just voted for the novels they preferred, and preferred other books.

But Death’s End and Babylon’s Ashes were good books! Indeed they were. But there were five Best Novel slots available on this year’s Nebula ballot and dozens of SF/F novels (at least!) of sufficient quality to make the ballot. The two novels that Britt points out are only a couple of the novels that could have been on the ballot, from the perspective of quality, but aren’t. There are — thankfully — always more good SF/F novels in a year than may fit on a Nebula ballot.

And not just novels but novellas, novelettes, short stories, YA novels and screenplays, those being categories that SFWA awards annually. I mean, let me use me as an example: My novella The Dispatcher was eligible for the Novella category this year. It was very well reviewed, had a huge audience, and is already up for other awards. I’m a well-known and (mostly) liked science fiction writer, and former president of SFWA, so I’m also familiar to the folks who nominate for the Nebula. The Dispatcher should be a shoo-in for a nomination, yes? Yes! I say yes! A thousand times!

But — surprise! — it’s nowhere on the Nebula novella ballot. Is this a snub? I mean, maybe — perhaps malign forces at SFWA aligned against me simply because of who I am — but the far more reasonable and likely correct answer is: The people who nominated for the Nebula awards this year simply decided on other novellas instead. There were many fine novellas this year, and the Nebula ballot reflects this, as all the novellas on it are eminently worth award consideration. I don’t consider The Dispatcher not being on the Nebula ballot a snub. It consider it a sign that it’s a really competitive year, with many excellent things to read. As a reader of the genre, and as a professional who wants the field to thrive, I really can’t complain.

I think it’s perfectly fine to champion books and stories and to be disappointed when people nominating for awards don’t have the same enthusiasm for them, in aggregate, as you do. But remember when that happens, it’s almost always not a “snub” of the thing you love, but rather an affirmation of the things the other person loves, and probably without reference to the thing you are championing. It’s a good perspective to have, in my opinion.