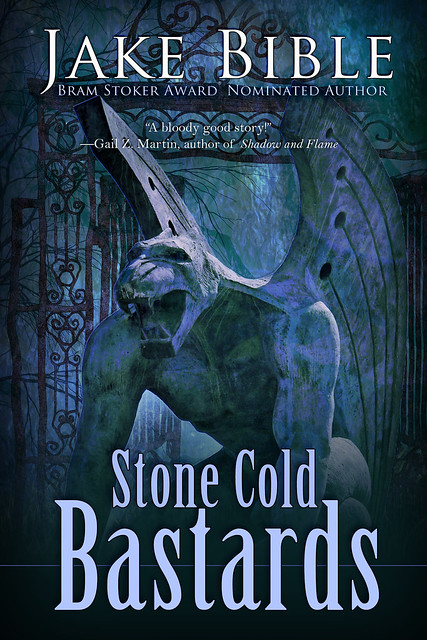 What’s in a name? Sometimes, as Jake Bible relates about his new novel Stone Cold Bastards, there’s quite a lot there indeed.

I have no idea the exact date or what influence triggered the name to pop into my head, but I do know I was in bed, it was late, and I had just turned out the light.

I switched the light back on and grabbed my phone to jot it down before I forgot it. My wife didn’t even ask why the light was back on; she was used to me taking random notes at random times on my phone. It’s part of being a writer’s spouse, just like me running last minute, random errands for her is part of being a public school teacher’s spouse. These things happen.

No clue what the novel was going to be about or even if it would become a novel. I have about 200+ titles/ideas/notes on my iPhone that I doubt I’ll ever get to in my lifetime, so there was a distinct possibility that SCB would amount to nothing.

Except that’s not what happened.

On March 16th, 2013 I jotted down a quick description “Like The Dirty Dozen meets Teenage Mutant Ninja Turtles meets The Omen”.

A day later I wrote “Old school, crack military team of gargoyles holds a Sanctuary against a Demon Siege”.

What the hell is an “old school, crack military team of gargoyles”? Were gargoyles in the military? And what’s up with capitalizing “Demon Siege”? My brain is weird.

I eventually fleshed it out some more and added the idea to my pitch sheet. Pitch sheet? Yep. Like I said above, over 200+ notes on my iPhone. I take the ones that refuse to let go of my mind and I add them to a pitch sheet. This is something I can email to publishers if I ever get asked “So, what ideas do you have?” Best to be prepared when opportunity knocks and all that jazz.

I was pretty stoked about this idea and constantly pitched it to publishers. It was gonna be a throwback to the old military movies of the late sixties and early seventies. You know, the ones with the misfit band of soldiers that have to come together and save the day while also sacrificing themselves because, hey, misfits die, it’s what they do.

Except I write genre fiction, so I switched out the human soldiers for gargoyles come to life when the End of Days shows up. I also switched out Nazis for demons. Well, humans possessed by demons. I wanted flesh and blood. I wanted a body count. I needed human bodies that could get hacked and slashed and shot and clubbed and crushed and just completely obliterated by some seriously badass stone fists.

I was in love with the entire idea.

I pitched it to five or six different publishers and they all passed.

Until I found Bell Bridge Books. They got my pitch sheet and to my complete surprise, Stone Cold Bastards was at the top of the list of what they would like me to write. Holy snack crackers! The Bastards’ time had finally come! Three years after I had originally come up with the idea.

Man, I was ready to get to the writing. Three years of those Bastards in my head meant I knew exactly what I wanted to write. And when I sat down to write the novel, it flowed so easily.

The gargoyles came to life when the Gates of Hell opened. There was a Sanctuary where the last humans left on Earth were being protected. Lots of action, violence, intrigue, snark, and blood. It was perfect.

Except it wasn’t. There is a reason editors exist. A big reason.

You see, I had been so focused on the gargoyles, and creating these badasses made of stone that would fit the title, that I forgot about why they were there in the first place: to protect the last humans. And, man, my human characters? They sucked.

Generic, cardboard cutouts. Unlikable. Boring. I gave the reader zero reason to care at all whether they lived or died. It didn’t matter how much ass the gargoyles kicked if the reason for kicking ass was to save a bunch of losers. The demons had more humanity than the actual humans.

Time to fix that!

Which is my job. I should have seen that from the start, but it’s hard when you have a burning idea and that idea eclipses everything else. A killer title. Gargoyles come to life. Demons to kill. End of Days. Except none of it worked without humanity at the core.

A couple more passes and the novel was done. And it was so much more than what I had hoped.

I had set out to write a novel steeped in pulp fiction with a seventies grindhouse ethos, but in the end I had a contemporary fantasy that not only had all of those elements, it had depth and heart and soul. I’ll admit that I grew a little teary when I re-read the ending.

Now it’s out in the wild. The Bastards have been set free.

All because of a title.

All because of Stone Cold Bastards.