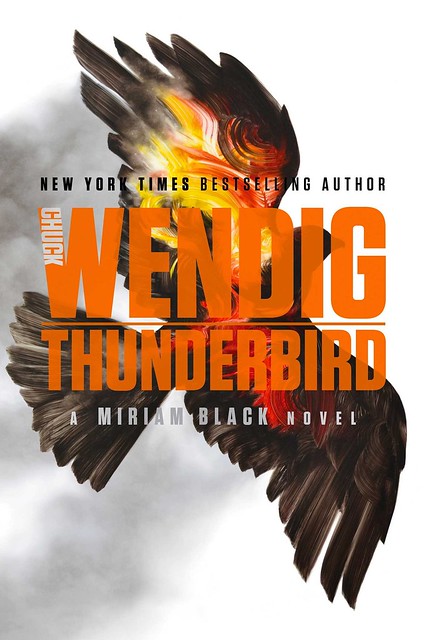 When Chuck Wendig is not drinking Febreeze smoothies or arguing with people about their burrito choices, he writes books! For example: Thunderbird, the newest entry in his Miriam Black series. In today’s Big Idea, Chuck talks about what it took to extend the series into new territory… and how the real world might have caught up with it along the way.

I’ll preface this by saying: I had no idea what was coming.

Two years ago, I wrote the fourth book in my Miriam Black series: Thunderbird. In it, Miriam seeks to end the curse that causes her see how people are going to die, but that path cuts straight through a right-wing militia nesting in Arizona.

It’s a militia, but it’s also a cult of personality, run in part by a charismatic man and his psychic wife. They have visions of an America in ruins, left so in part by those “others” who come across the border or from overseas. They also distrust their own government—these people are paranoid, driven by visions of a new world order or state-sponsored super-flu or other forms of impossible control. They want to break it all down. Blow it all up. They want to heal the divide by eradicating the other side in a civil war that proves their version of justice. They have weapons. They have bombs. They’re going to kill people to—in their minds—save people. And then they have visions of taking over the government that they destroy.

The book comes out this week, and suddenly it seems hopelessly naive. It now seems like a thing less out of fiction – or, at least, less a thing at the fringes and the margins – and is now a very real infection slithering right to the heart of American life and discourse. It’s gone off the pages. It’s gone off the rails. Here we are, in thrall to a cult of personality who sees enemies everywhere, who imagines threats that aren’t real, who seems to distrust the government even as it takes it over. It’s a group that claims that it wants to heal the divide, but its mechanism to do so again seems to be to create unity by destroying those would disagree.

At the time, I thought, I’m going to talk about this thing, this sickness forming in the roots of the tree, and I was stupid enough to think that’s where it would stay. Trapped in those pages like a prisoner behind paper walls. But here we are. The big idea, the bad idea, has taken over. It’s escaped the prison. It’s gone beyond just the roots—it’s in the trunk of the tree and in the soil around us. I didn’t think the ideas I put forth in the book would become mainstream, in a way. I didn’t know we would climb so high only to fall back so far, so fast, to a broken world.

I try to look at the book now, long after I wrote it, as it’s coming out onto bookshelves in a world whose own special horrors have exceeded the story’s own in many ways, and now I’m forced to find a different big idea contained within, one that maybe seeks to find hope in the hellmouth. And I’m forced to look at Miriam herself, because though she’s by no means a good person, she still tries to be better. Her capacity to do the right thing when surrounded by wrong is something noble. Her drive to be better even when she knows she’s easily one of the worst people in the room gives me a weird kind of hope. And the fact that even in all the darkness, the book still lets in rays of light—grimy light, light that flickers, but still light that clarifies and chases away shadows—well, I find that hopeful, too.

And sure, it’s just a book. It’s just a story. But like I said, sometimes the things inside books find a way outside the books. Sometimes they were never really the realm of fiction. Sometimes stories know things and tell us things even before we’re really aware of them. So that’s what I’m hoping is happening here. Maybe Thunderbird is showing us not only the reality of the darkness, but also that there’s a way through, too, toward the light. Maybe the big idea is that no matter how bad it gets, we can always make it better.