About to get on a plane to go to where I will get on a boat to be with a couple thousand other nerds. Not planning to be on the Internet whilst at sea. Definitely not reading the news. Please don’t blow up the planet while I’m away. Most times I’ve said that before it was a joke. Less of a joke this year, alas.

There’s a Big Idea piece scheduled for next week, but otherwise it’ll be pretty sparse here; at most I’ll post taunting pictures of gorgeous Pacific sunsets or such. Fortunately there’s the whole rest of the Internet for you to see! Go see it! Otherwise, be back in the real world in about a week. 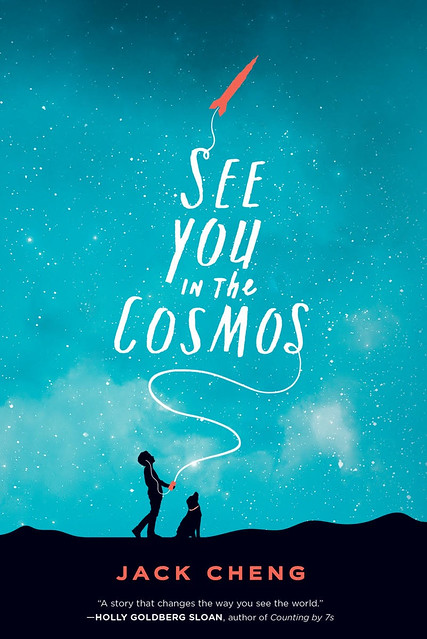 As someone who knows the joy of naming a character after a particular astronomer and popularizer of science, I’m delighted that Jack Cheng continues in this tradition with his novel See You in the Cosmos. In his Big Idea, Cheng talks about how our mutual brain crush inspired his story.

I remember the exact moment it happened. I was at my parents’ house for Thanksgiving, hanging out in my younger brother’s room, when I saw on his shelf a copy of Carl Sagan’s Pale Blue Dot. I remembered an episode of a podcast I’d heard years before, in which Sagan’s widow, Ann Druyan, talked about how the two fell in love as they worked to gather sounds for the Voyager Golden Record. When I woke up the next morning, it was there, like the remnants of a dream: A story about a boy and his dog trying to launch a golden iPod into space, with his own sounds—his own record of life on Earth.

Very quickly I had the idea to tell the story using the iPod itself. The novel would be written as transcriptions of the recordings my main character, Alex, was making for intelligent beings millions of light-years away. But I hadn’t yet realized the implications of the choice. In fact, it didn’t even feel like a choice at the time. It was just the MacGyvering that you do as an author—you try to make full use of what’s already in the story. And this story had a golden iPod bound for the far reaches of space.

As I worked on the novel, I began to notice strange entanglements between Alex’s quest to launch his rocket and my own quest to write the book. I saw how his devotion to his task came from his very human desire to connect with others, and to understand his family’s history and circumstances. The setting was inspired by a solo road trip I’d taken in the Southwestern U.S. in the summer of 2013, but it wasn’t until after spending time with Alex that I remembered one of the main reasons for the trip in the first place: So I could, at the very end, retrace a Greyhound bus ride my father had taken from LA to Detroit when he first arrived in this country.

I found myself again and again in Alex’s story. It seemed even to mirror the very acts of writing, reading, and publishing. Alex embarks on his mission alone—save for his dog—but he eventually comes to meet people who support him and become a kind of found family. And wasn’t this also the journey of an author? Of moving from the solitary experience of writing the first drafts to getting feedback from trusted early readers, to working with agents and editors and so on, until the team around him or her becomes its own kind of found family? Even the book’s opening line—Who are you?—took on new meaning for me. Not only was it the question that Alex was asking of the recipients of his message, and the question he was asking of his father he never knew, it was also, I realized, the question a reader asks of a main character at the beginning of every novel. It was the question that I was asking of my reader, across the vast ocean of fictional space-time. Who are you?

That initial choice to tell the story on the iPod, it turned out, was indeed the Big Idea. Not just because it was a clever and interesting way to tell a story, but because it placed both the myself and the reader on Alex’s Earth and simultaneously away from it—far away—as the eventual recipients of his message. And with this vast distance comes, I think, a deep empathy; when you put yourself in the mind of someone so far away, and then look back on yourself from that person’s perspective—like Carl Sagan encouraged us to do when he described Earth as a “pale blue dot”—you end up seeing the things you have in common with your fellow human beings. You end up seeing your own story in the story of another. And their story in yours.