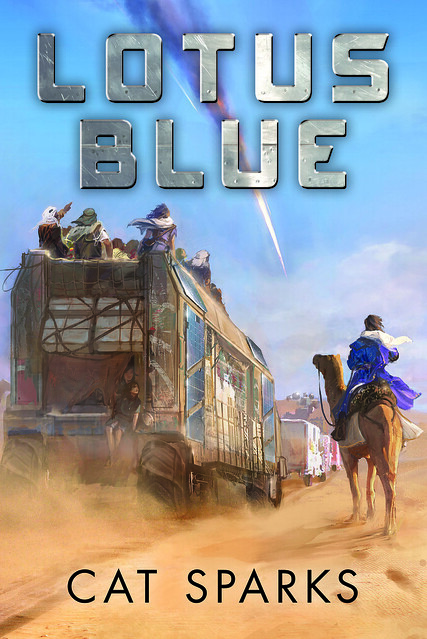 In today’s Big Idea for her novel Lotus Blue, Australian author Cat Sparks talks about the enduring power of stupidity, and what it takes to save the world from it… or not.

I’ve been a fan of science fiction – in particular, post-apocalyptic narratives – since I was a child. Unsurprising that I eventually turned my hand to writing a novel set in a landscape created by the dismantling of long-term, sane, evidence-based civilization. If a lifelong interest in sci fi has taught me anything, it’s that the genre, at its best, serves as a kind of cultural decoder, telling us what we fear and feel about changes to the here and now.

As much as I loved the fictional and filmic apocalyptic landscapes of adolescence, they never really worried me. They weren’t serious real-life threats because I thought, nobody could ever be that stupid. Had I been paying more attention at school, I might have noticed human history groaning with the weighty burdens of stupidity, from the Treaty of Versailles to whoever cut down that last tree on Easter Island.

One week out from Trump’s inauguration, George Orwell’s 1984 became the best-selling book on Amazon.com. Back in 1948, Orwell was writing satire about the deficiencies and dangerous leanings of his own era. We’re not quite living in Orwell’s future, despite Newspeak cutting closer and closer to the internet’s linguistic bone. North Korea under Kim Jong-un is more aligned with Orwell’s dystopic vision.

My home continent Australia is a vast, inhospitable place with its 24 million residents mostly clinging around its more comfortable coastal fringe. Our mixed market economy relies on agriculture and service sectors, plus mining exports: iron ore, gold, uranium, coal, and liquefied natural gas. And don’t forget tourism: all those lovely golden beaches. Our greatest tourist attraction – the Great Barrier Reef – is bleaching and being killed off as I type.

Future Australia is the landscape of Lotus Blue. Australia got cut off – it’s its own world now. There are no countries, only towns and tribes. Weakened governments, desperate for new solutions to unsolvable problems in an increasingly fragmenting and uncaring international climate, sold off the country’s “useless”, inhospitable interior to anyone who’d pay, granting the buyers carte blanche to do anything they wanted with it, no questions asked.

Such a move is not without historical precedent. In the 50s and 60s the Australian Government permitted the British to test nuclear bombs in our deserts, regardless of the long-term consequences, most famously at Maralinga in South Australia. The indigenous people were shuffled off their traditional lands, and suffered health issues as a result of radiation, as did Australian service personnel, many of whose children died young or were born with severe deformities.

As if that weren’t bad enough, today, Australia is considering importing 3000 tons a year of other countries’ nuclear waste, planning to bury it in the outback — out of sight and out of mind. It’s clear that the government just wants the money and is incredibly short-sighted for the long-term health of our continent and the world. Even worse is the Queensland government’s approval of the infrastructure for a coal mine that will threaten the Great Barrier Reef with massive and continual dredging and dumping – all for an industry with an admittedly limited lifespan.

The real world seems particularly awash with stupid right now: alarming reserves of poorly stored biological toxins, development of lethal autonomous weapons systems against advice from science and industry leaders, a mindboggling denial to accept that manmade climate change is real. A collective refusal by too many governments to rehome the millions of refugees displaced by violent events beyond their control. People across the globe voting against their own best interests for things such as affordable healthcare, public education, environmental regulations and other vital social services. Voting against human rights and equality — or even worse, not bothering to vote at all, believing the future is not our concern or responsibility.

Lotus Blue is set in the future of a world that didn’t listen; a world in which reasonable self-interest and planetary concern was abandoned in favor of short-term profits for the elite. Humans lost control of the deadly, autonomous machines they had invented, as the oceans got warmer and the weather got wilder, the air got hotter and seas rose high, destroying homes, devastating agriculture and resulting in mass transience. A man-made, whole world of stupid.

Everything in the novel is extrapolated from genuine science, technology and current events. Fancifully embroidered, sure, but none of it came out of pure imagination.

We have never known so many ways and means of stupid. There have never been more of us and we have never demanded more from our environment than we do now. The fanciful, perpetual motion machine known as late stage capitalism stands as the greatest stupid in our arsenal, pushing the planet beyond the threshold of sustainability.

Today, eight individual men hold the same wealth as half the planet’s population. Silicon Valley and NYC super rich are reportedly building luxury bunkers and buying up ‘safe haven’ real estate as that doomsday clock ticks closer to midnight. As if any kind of bunker could protect them from the kind of darkness achieved when the lights go out on civilization itself.

In Lotus Blue, we meet the descendants of those bunkered, nervous rich — the powers-that-were, who ignored humanitarian and science-based concerns and kept up their high-grade exploitations until there was nothing left to dig up, farm or sell. Nothing but a vast, toxic expanse crawling with semi-sentient quasi-military hardware left over from other people’s experiments and skirmishes.

Against all odds, some of the hardy, abandoned surface-dwelling poor adapted and survived. Lotus Blue’s protagonist is a girl who discovers her unwelcome connection to the landscape’s deadly past. She must learn to use her resourcefulness to fight for and save the future from even greater stupid.

Which, let’s face it, we’re all going to have to do eventually. Hopefully sooner rather than later.