Still Life With Author Copies and Cat, Plus Audiobook News 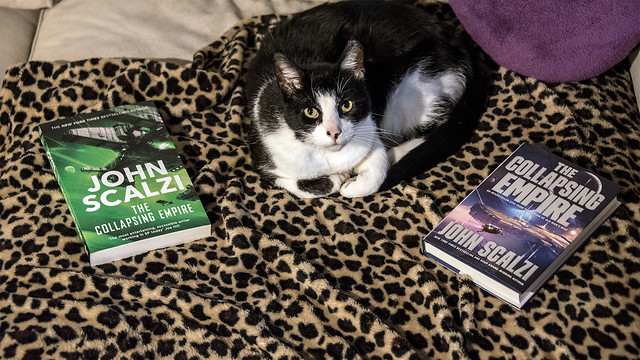 While I was on the JoCo Cruise, the US and UK editions of The Collapsing Empire arrived at the Scalzi Compound. Here they are, with cat for scale.

Tomorrow, I begin narration on the audiobook for @scalzi's The Collapsing Empire. It is such a great book! I am so excited to perform it!

And if you’re asking, “Gee, isn’t the audiobook out next week?” the answer is indeed it is! Wil would have done the narration last week, but he was on the JoCo Cruise too, with me, and on which we discussed the book while lounging on the Lido deck, as one would. Which is to say we knew this well ahead of time and scheduled everything to move quickly this week. Don’t panic, we meant to do this.

Also, it’s eight days before release date here in the US, ten days in the UK. Still enough time to pre-order your copy (via your favorite local or online retailers) so you can have your copy on the day it comes out.

Also remember that I’ll soon be on tour, with Lexington, Raleigh, Chapel Hill, Richmond, Nashville, Austin, Houston, Dallas and Chicago on the first leg. If you live in one of those towns, you should come see me! I’ll be reading new stuff that no one else gets to see or hear probably for a year or so. Lots of bragging rights going on there. Plus I’ll sign your books and stuff. You know, like you do. Or at least, like I do.

22 Comments on “Still Life With Author Copies and Cat, Plus Audiobook News”