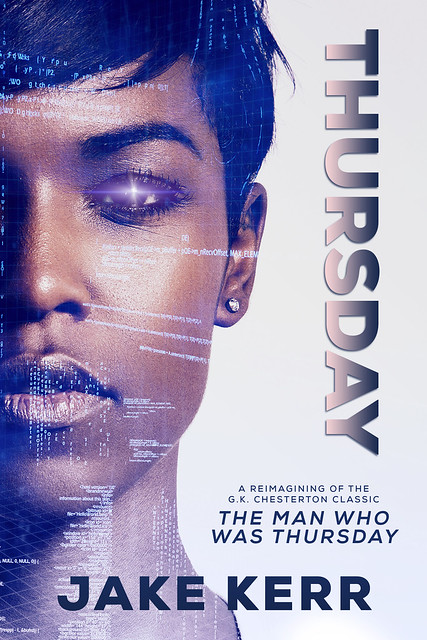 It’s Thursday! No, not the date (it’s still Monday, sorry about that), but the novel, written by Jake Kerr. And in it, Kerr attempts an update on a classic, if dated, fantasy novel. How hard could it be, right? Well…

So, my new novel is about a future Earth where the population escapes the polluted and dying planet by logging into linked virtual reality servers. They take on roles as fantasy characters, live in former time periods, cruise the Tinder server—all in an effort to get away from the sad world where they live. A mysterious group wants to destroy the virtual reality network to force the citizens to wake up and force the corporations and governments to clean up environment. Their belief is that the planet was purposefully polluted to move people to the corporation-controlled virtual reality operating system. Our hero infiltrates the supreme council of this group and finds that her life is constantly in danger as she moves from secret meetings to administration buildings and virtual reality fantasy servers where she is a level 73 mage. Along the way, everyone betrays everyone else and nothing is what it seems.

That is the description of Thursday, and based solely on that you would never know that it is an adaptation of G. K. Chesterton’s classic The Man Who Was Thursday. And therein lies the following tale.

I first read The Man Who Was Thursday in college, and it immediately became one of my favorite novels. The humor. The plot twists. The intrigue. I was entirely enthralled. Michael Moorcock called it one of the top 100 fantasies of all time, and it’s a seminal novel in the thriller genre, with its series of chases and pursuits. It’s an amazing book with one significant problem—it’s very dated.

The humor references have little cultural meaning to many readers today. The surrealist/spiritual metaphors and allegories are highly specific and jarring for many. And the expositional and philosophical prose is far out of fashion. To make matters worse, the frightening bad guys are anarchists, a group that provides little sense of dread today.

It always struck me that this extraordinary novel deserved to be updated in some form or fashion so that a new generation of readers could enjoy Chesterton’s genius. The more I thought of it over the years, the more I considered doing it myself. Chesterton wrote the plot, the scenes, and the characters. How hard could it be? I thought. Well, I found out when I took on the project last year.

Updating the story wasn’t the hard part. With its surreal nature and the themes of deception and truth, I immediately knew that I wanted to use some kind of virtual reality framework. I’m also a huge fan of Philip K. Dick, and two of his common themes are favorites of mine: What is reality? And what does it mean to be human?

Specifically, I thought of another favorite novel of mine—Dick’s Time Out of Joint, a fifties era paperback that centers on the protagonist living in a world that isn’t what it seems. Taking The Man Who was Thursday and moving it to a virtual reality setting where it’s hard to tell what is real and who is who they say they are while adding AIs who may or may not be considered human seemed like a perfect way to update Chesterton’s tale.

Easy, right? I even mirrored the scenes and chapters.

There was only one problem: It didn’t work.

My first draft was awful. I had stayed too true to Chesterton’s dialogue, and it sounded quaint and anachronistic. I had stripped out nearly all the exposition, and that left threadbare scenes. I had followed the plot so closely that some of the scenes that made sense in 1908 were absurd in a virtual reality setting.

What I thought would be easy was suddenly looking like a formidable challenge.

My friend Matt Mikalatos (who wrote the afterword) basically said I had written “too G. K. Chesterton and not enough Jake Kerr.”

While I grumbled about the hard work ahead of me, the more important concern was that the more I changed, the less I was staying true to the original novel. Yet if I didn’t make significant changes, many of the problematic things I wanted to fix would remain.

I’ve written homages before (namely “The Old Equations” and its thematic tip of the hat to “The Cold Equations”), but this was an adaptation. I needed to keep the connection to the original source alive and clear.

So I waded in with what I hoped was a scalpel and not a machete.

I knew I had to keep the plot, including the sparse and thin scenes without the exposition. I also wanted to mirror the chapter structure to make it feel as close to Chesterton’s novel as possible. Beyond that, however, I realized I had to make significant changes.

I had originally intended to have fun and keep as much of Chesterton’s dialogue as possible and overlay it on the SF setting. I loved the idea, but it just didn’t work. So the first thing I did was re-do practically every line of dialogue. I worked hard to keep some, but only if it made sense. After I finished, I had a much more readable and contemporary-sounding novel. While I didn’t keep the words themselves, I worked hard to keep the spirit of the them.

Now Chesterton’s plot is fantastic and truly one of the best of all time, with twists that build on twists. The trouble was that it is limited by 1908 technology, with trains and pistols and slow travel on horseback. I ended up dramatically changing some scenes, including a tense race against the clock. Chesterton based the scene on the arrival of a train. I had it based on a server pending a maintenance lockdown.

As I noted earlier, Chesterton filled a lot of scenes with expositional philosophical musing. While perfect for his novel, it simply doesn’t work in a contemporary SF novel. So I had to actually flesh out a lot of scenes with action that are only described or mentioned in passing by Chesterton. This happens in the opening chapter when Gabby Simm meets Lucian. For Chesterton it was a philosophical meeting of poets. I added a scene-specific goal for Lucian with Gabby narrating with snark.

I also couldn’t ignore the opposite point-of-view of updating a book—the demands of contemporary genre conventions. You can’t simply adapt a book to a new setting, you need to apply the setting to the book. For example, much of my book is set on a fantasy virtual reality server like Warcraft or Elder Scrolls Online. How could I set a thriller in such a setting without having a virtual reality fantasy battle, complete with a castle, spells, NPC warriors, traps, and unique magical items? I made the battle fit within Chesterton’s plot, but it is new and gives the book the contemporary feel it requires.

The final piece was the biggest challenge for me. Chesterton’s background was decidedly religious and based on the secular, frightening, and chaotic anarchist forces in 1908. My background was of a modern world dying from neglect, with virtual reality the way the population escaped this dismal reality. The world is even described as “IRL” and the IRL spaces where people live are delineated as “inside” and “outside.” Making all this work required me to add some scenes and change some of the ways that the characters interacted. For example, the opening scene in my book doesn’t exist in The Man Who Was Thursday.

At its heart, The Man Who Was Thursday is steeped in Catholic symbols and Christian messages, and this is where I am most curious about how the book will be received. I’m an atheist and removed all of those pieces from the novel. Yet I’m convinced that I’ve kept the spirit of the novel enough that if you are religious or a Chesterton fan, you will still see those things there, just not as overtly as Chesterton made them. Christian speaker and author Matt Mikalatos addresses this in the book’s afterword.

Earlier I wrote: Chesterton wrote the plot, the scenes, and the characters. How hard could it be? The answer turned out to be very hard. I’m not exaggerating in saying that each chapter of Thursday took about as long to write as two chapters in a book that I would create from my own imagination. It was, in no uncertain terms, a significant time commitment. I do believe it was worth it, however. Even if readers hate my book, maybe the spark will be there for them to search for Chesterton. I wouldn’t mind that at all.