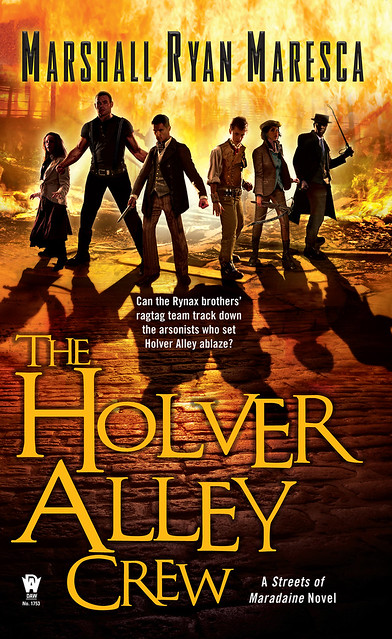 Stop, thief! In today’s Big Idea, Marshall Ryan Maresca explains why actions we wouldn’t approve of in real life we enjoy in fiction, and what that means for his new novel, The Holver Alley Crew.

It’s fascinating how much we love the thief-as-the-hero trope, and we love having them pull a heist.

I mean, in real life, we don’t praise thieves, and we certainly don’t root for them.  I’ve been wracking my brain trying to think of any living thieves that we have romantic notions for.  We certainly romanticize the thieves of the past: Jesse James or Bonnie and Clyde, but that’s with a distance of history that makes them almost fictional.  And we love fictional thieves.  From Oceans 11 to The Lies of Locke Lamora to Six of Crows to The Fast and the Furious, we can’t get enough of bad guys doing things well.  We love to see stories about thieves pulling some heist or caper, slipping through the fingers of the proper authorities, and heading off into the sunset with their ill-gotten wealth.

Why do we love it, when most of us would never support this in real life?  Do we want to live vicariously through them, getting away with things that we know we would never get away with?  Do we harbor secret fantasies along the lines of, “I would never actually rob a casino… but if I did, this is how”?

I’m no different, because I love that stuff.  So I wrote The Holver Alley Crew, which is flat-out a fantasy heist novel.  Two brothers have a job, so they put together a crew, and they pull the job.  Absolutely, my favorite part of writing this book was coming up with the plans.  I loved writing whole sequences of the characters going, “Here’s what we want to accomplish, what do we need to do?”  I loved coming up with elaborate, “here’s our way in, here’s how we do this, here’s how we get away” plans.   Then I threw wrenches into the works to ruin those plans, so my characters would have to improvise new ones.

I feel part of our love affair with charming thieves and clever rogues we want to believe that if we had to be thieves, if we had to pull a heist, we’d have the smarts and the moxie to pull it off.  But we wouldn’t do it just because we had a passing whim.  We would only do it because we had to.  Only because circumstances made us desperate.

I think we can all understand desperate right now.

It was important to me to make my heist-pulling thieves good guys who want to be law-abiding, legitimate businessmen.  But then a fire comes along and destroys all they were building: home, shop, legitimate life.  With that lost, they have to go back to pulling heists, and they make a point of putting together a crew of people who were also ruined by the fire.  It’s not about just getting back on their own feet, they want to help their neighbors as well.  Just enough to get themselves back on the straight path they were on.

Of course, for any heist, you need a crew:

The Planner:  Asti Rynax, former intelligence officer, forcibly retired.  The one who can figure out all the angles and put together a plan so crazy that no one will see coming.  Deadlier with an apple and a lockpick than most people are with a pair of knives.

The Sharpshooter: Helene Kesser, best crossbow shot in all West Maradaine, with a mouth as sharp as her aim.

The Muscle: Julien Kesser, Helene’s cousin.  Strong as an ox, but not allowed to fight, or you’ll answer to Helene.  Loves cheese.

The Driver: Kennith Rill, carriage driver.  Designed an unrobbable carriage, which they now have to rob.

The Apprentice: Mila Kentish.  Teenage beggar girl that no one notices until after their purse is already gone.

The Old Boss: Josie Holt, the boss of North Seleth, who’s willing to give the Rynax boys one last chance for old time’s sake.

Can this crew pull of their heist, charm your socks off and ride off into the sunset?  You’ll have to read it and find out.