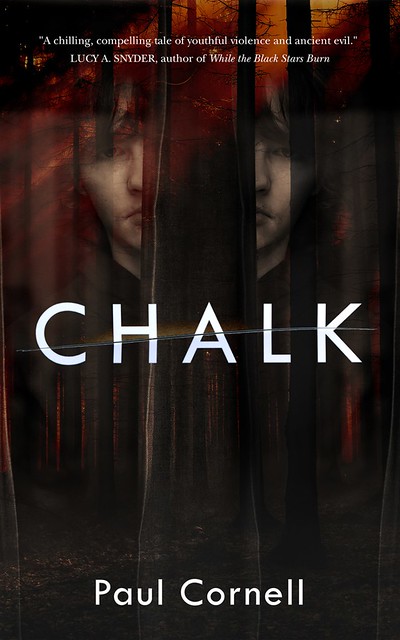 Chalk, by Paul Cornell, is in many ways a remarkable book. But it’s not an easy read, and for Cornell, it’s a story that has personal meaning for him, and is a book that has a lot of him in it. He’s here now to tell you more about it, and why as a writer it took him years to get this story right.

Chalk is a book that’s been with me for over twenty years. It’s taken that long, and many, varied drafts, to shape the ideas in it into a story that, hopefully, works. That was partly because the subject matter is intensely personal to me in several ways. It’s a book about bullying, about growing up in the 1980s, about Wiltshire’s prehistoric landscape, so often I found myself having to force onto the page material I had found difficult to express in real life. It’s a novel about the interaction between magic, consensus reality and the mind (Isn’t ‘consensus reality’ a strange term, when actually what’s involved is the opposite? A simple majority doesn’t make a consensus. Nobody experiencing a different reality seems to get a vote. For a lot of people, ‘non-consensual reality’ would be closer to the truth).

In the real world, it seems to me that every time the impossible touches the accepted it’s a singular event, something so strange and startling that human efforts to categorise those events (crop circles; the UFO myth; ghosts) have come to feel to me to be missing the point to an almost obscene degree. We encounter the unknown and seek to make it mundane. Which is a different thing to seeking to understand it. So I wanted my story of Waggoner, a child at school who has something terrible done to him, and then has horrifying things from both this world and another take an interest in him, to be rooted entirely in his subjective experience.

Waggoner is split into two boys, both with his name, who live alongside each other. I want to underline that that’s not a metaphor, not a literary device, or if it is, only in the same way that all magic is. The book says it ‘really happened’. The way that reality contorts and fudges things to let the second Waggoner be there is an aspect of the text I feel very strongly about, because I feel, again, that’s how the impossible touches the everyday, on a moment by moment basis, not by laying down a set of rules for itself and keeping to them. That’s physics, and/or fiction that seeks to fulfil different expectations than this book does.

‘Are you an evil twin?’ Waggoner asks the other version of himself at one point. But he’s not. He may be the one who does awful, violent things, but the Waggoner who narrates the story isn’t ‘the good one’. Waggoner tries to make sense of what’s happened to him through writing his own stories, and sometimes imagines what he’s going through to be a revenge plot, with the possibility of victory over his tormentors, but it’s not. It’s a lot harder on him than that. Chalk is a book about cycles of abuse, and as a victim, Waggoner’s only possible heroism is in seeking to break those cycles. That point, that there’s no nobility or ending to anyone’s narrative in acts of revenge, has been at the heart of these twenty years of multiple drafts. It’s a hard thing for me to force myself to accept.

In many ways, Chalk is a book about whose narrative wins. The new Waggoner has aims which are part of a great and noble story of heroism and struggle, and are as horrifying as that sounds. The previously whole Waggoner has the stories he writes, which use every genre he can find in his environment to try to digest what he’s dealing with. Angie Boden, the heroine of the book, has created for herself a whole method of practical magic from the pop charts, and her narrative of the world is based on that. And Waggoner’s Mum and Dad are trying to tell a meaningful story of themselves as failing middle-class people in Thatcher’s Britain.

I’m in there somewhere. I’ve decided it’s a very bad idea to indicate how much of Chalk happened to me. If you’re a fellow survivor of, well, virtually anything, I hope it’s a book which leads you along through a narrative that will wake all that stuff and then slay it. It’s the blues. It’s comfort through reworking. I hope it gives you control. I know you don’t want revenge, not really. Not when you look around and see all the revenge narratives unfolding everywhere.

Who would have thought it would take me twenty years to write a book about right now?