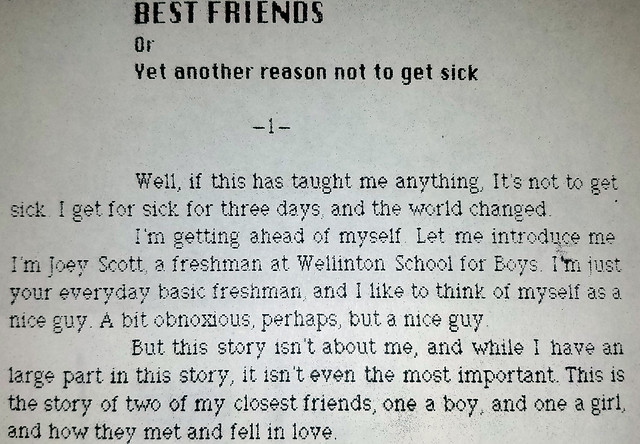 From the moment that you wrote the first draft, how long it did it take you to see your first work of fiction published?

Heh. Well, it depends on what one means by my first work of fiction.

If, for example, my first work of fiction is thought to be the very first complete story I ever wrote, which is a story called “Best Friends: Or, another reason not to get sick,” then the answer is thirty-three years and counting, since I wrote it in 1984 for Mr. Heyes’ freshman English composition class, and aside from a few copies I ran off for friends (mostly the ones on whom the story was based), no one’s ever seen it, or is likely to. It was written by 14-year me and while it was good enough for the class — I was the only person in three sections of the class to get an “A” — I suspect it is of very limited interest to anyone else.

(With that said, I think the story’s opening graph makes it clear that my general advice of “have good opening lines” is something I knew early on. “Well, if this has taught me anything, it’s not to get sick. I get sick for three days, and the world changed” is pretty solid, even if it has a problem with tenses.)

(And yes, I do still have the complete story, along with just about every other story I wrote as a teen. No, I won’t show them to you. I’m doing you a favor.)

If one discounts juvenilia, then my next actual complete work of fiction might be considered to be a poem I wrote, “Penelope,” which I wrote in 1991. It’s written from the point of view of the wife of Odysseus, waiting for her husband to return and delaying having to pick a suitor by weaving and then unraveling a burial shroud. I don’t usually consider it to be fiction — my brain generally sections out poetry and prose fiction — but inasmuch as it does have a point of view character, and that point of view character is not meant to be me (spoiler: but it kind of was, inasmuch as I was writing it for a girl I pined for and wanted close to me and hey, look, allegory and metaphor), it could be called fiction. As it happens, “Penelope” was published in Miniatures, my book of very short stories, which was published last year (literally on the last day of the year). So that would be 25 years. I’d note I didn’t try to publish it prior to Miniatures; it was written for a specific person in mind.

If we toss out that poem and stick to prose, the next piece of completed fiction I wrote was Agent to the Stars, which I wrote in the summer of 1997 as my “practice novel,” i.e., the novel I wrote to see if I could write a novel (turns out I could). Inasmuch as it was my practice novel, I didn’t write it with the intent to sell it, but when I created my web site at Scalzi.com, I decided to put it up here and let people download it if they liked, and if they wanted, to send me money for it. So it was self-published, and that was in 1999. If you want to count self-publishing on one’s Web site as actual publication (back in 1999, I would note, it would generally not have been considered so), then it took two years. If you don’t count that as publishing, then you’d have to wait until 2005, when the hardcover version was published by Subterranean Press. In which case: eight years.

But it’s important to note that Agent got published (by someone else) because that publisher asked to publish it; I didn’t shop it. If you’re curious about what piece of fiction of mine was the first that I wrote with the intent to try to have it published, and which was then in fact actually published by someone else, then that would be “Alien Animal Encounters.” I wrote it in 2001 and immediately submitted it to Strange Horizons magazine, on the basis that I liked the magazine, and also because it would accept electronic submissions, and I didn’t own a printer. For the life of me I can’t remember exactly when I wrote it, but I did submit it almost immediately after I wrote it, and it was published pretty quickly after that. That was October 2001, so I suspect I wrote it a couple months before that. Let’s say three months to be safe. So: Three months, from writing it to it being published.

(Also, all of these were first drafts, in the sense that I edit as I write, so when I type “The End” I just do a quick copyedit run through. I don’t edit less than people who write drafts, I just do it as I go along. Works for me; your mileage my vary.)

So: Depending on how one chooses to define what was my first work of fiction, and what constitutes publishing, the answer to the gap between first draft and the pub date is three months, or two years, or eight years, or 25 years, or 33 years and counting.

And you know what? I think that’s about average, as far as writers are concerned. There are lots of places one could count as the starting point for one’s career, and lots of different opinions as to what constitutes being published.

Everything progressed from there. And here we are.