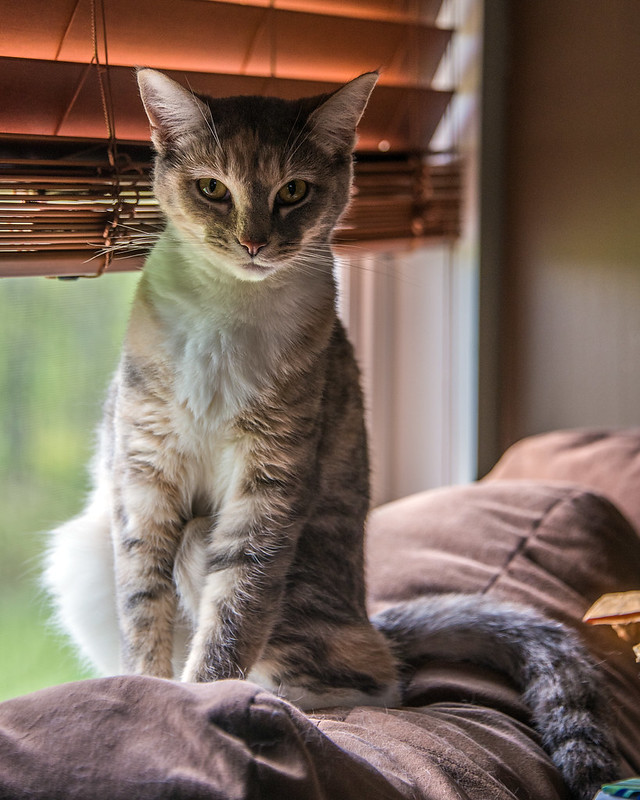 First: Look! Kitten! A very serious kitten, it appears, taking the first of May very seriously.

Second (and so on): So, I’m back home after two weeks on the road and after five weeks of touring in general, which means a lot of catch up — dealing with non-critical emails and business-related things and stuff and junk, including scheduling Big Idea posts. This will all be taken care of in the next couple of days, so if you’re waiting on emails/business stuff/Big Idea posts through June, if you don’t hear from me by Wednesday, uuuuuuhhh, assume you never will, sorry (although I will probably post on Whatever when I fill out all the Big Idea slots so people won’t be left hanging).

For those of you wondering how the tour went, generally: It went very well! I basically filled every space I was in, met a lot of people, sold a lot of books, and saw some good friends who I might not have otherwise gotten a chance to see, and generally had quite a lot of fun. With that said, by the very end I was burnt burnt burnt. I’ll continue being a smidgen burnt for most of the rest of the week. Lots of sleep, and cats, will fix that.

The Whatever will now likely resume a more regular schedule (or, at least, one that will feature something other than pictures out of hotel windows); it’s also likely updates will happen in the afternoon (local to me) because mornings will be assiduously spent avoiding the Internet and writing on books, because the books pay me money and have to come first. I don’t suspect this will be a problem for most of you (and if it is, you know, well, too bad).

For May, I am going nowhere and having no public events. For June, I have three, two at the very beginning (BookCon in NYC and Bay Area Book Festival in Berkeley) and one at the very end (Denver Comic Con), but I’m mostly staying home that month too. I have books to write. I have to write them sometime!

Also: Official announcement: I will not be attending either the Nebula Weekend or the Worldcon this year, Nebs because I have to make substantial headway into Head On (no pun intended) and I’m currently so very burnt on traveling, and the Worldcon because my schedule of personal commitments that month (including sending my daughter off to college) makes traveling to Helsinki pretty much impossible. Yes, I’m sad, too — I very much wanted to spend time in Finland and northern Europe. But I just can’t make it work, as much as I wish I could. Have fun without me, folks. I mean, if you can.

And that’s where everything is at the moment.

← The Dispatcher: Now Out in Print and eBook!
Catching Up On the News, Alas →