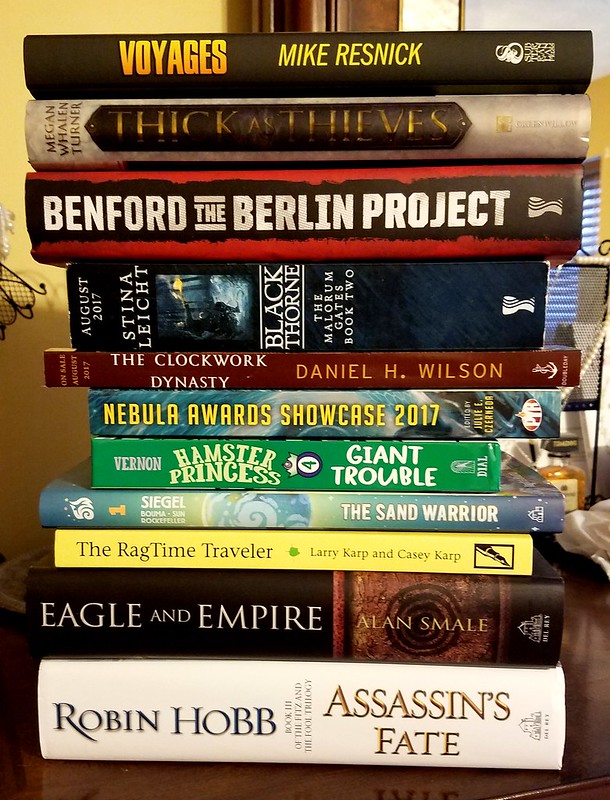 Lots of books came to the Scalzi Compound while I was out on the last leg of the tour — and here’s the first stack. What in here calls to you? Tell us in the comments! 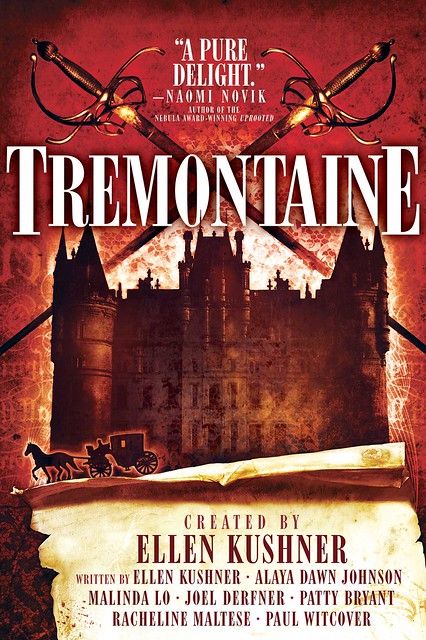 After reading this Big Idea piece by Malinda Lo and Alaya Dawn Johnson about Tremontaine, the serial novel written by them and a host of others, based on the Swordpoint novels by Ellen Kushner, I guarantee you won’t think the same way about… chocolate.

I first read Ellen Kushner’s Swordspoint after I had already published a couple of fantasy novels in which same-sex relationships are normal, and I’d heard that Swordspoint did the same thing. I was astonished to learn that Ellen published this novel back in 1987, a full twenty years before I even sold my first book.

I soon learned that the Swordspoint novels, which are set in a City full of swordsmen and nobles, sumptuous Hillside mansions and murky Riverside taverns, are iconic among many queer fantasy readers. So when Ellen asked me if I was interested in joining the writing staff on a serialized prequel to Swordspoint, the chance was too good to pass up.

Even better, the story for Tremontaine would include a whole new cast of characters: the traders who brought chocolate, the favorite drink of the nobles, to the City. I immediately knew that meant the story was going to delve into food and cross-cultural trade (be still my beating heart).

You see, I wrote my master’s thesis on Chinese food, and later dropped out of a Ph.D. program in anthropology. (I often like to say that good training for writing fantasy is dropping out of an anthropology graduate program.) The chance to explain how the nobles of the Hill came to drink their chocolate—imported by traders from across the seas—scratched a particular world-building itch that I’ve always had. When people in fantasy novels eat foods spiced with cinnamon or cardamom, or drink wines that must be grown in regions far from the evergreen-covered forests they’re questing in, or hell—drink tea—I always want to know how did they get that food in the first place?

Global trade is the answer. And it turned out that the idea for introducing these chocolate traders into the City arose from a discussion that Ellen had with another author, Alaya Dawn Johnson.

What I remember is that I was having tea with Ellen at her house before I even had any idea she was discussing Tremontaine as an idea—I think she mentioned that she had some project going on, but I didn’t know what it might be. And as she was pouring me the tea, she was talking about how people assume the Riverside world is just a straight-up 18th century England pastiche, but that actually she had deliberately moved a bunch of cultural aspects around so that it wouldn’t be. And one of her examples was that the good people of the City don’t ever drink tea. The rich people sit down to drink chocolate.

And since I was just thinking of applying to this master’s program in Mesoamerican Studies at the Universidad Autónoma Nacional de México and had been doing a ton of research on Mesoamerican history, and food in particular (my thesis is all about fermented food in the Mexica empire), this really made me sit up and get excited.

So I started telling her about how the very fact that everyone drank chocolate implied trade with some of the peoples of central or south America (or corresponding Riverside versions thereof). The Columbian exchange is just one of those geeky things that I adore learning about, because of the extent to which the exchange of foodstuffs changed culinary traditions all over the world. The idea that certain plants had to be brought over from one continent to the other in a very specific cultural moment in order for, say Indian and Chinese food to have chili peppers or Irish food to have potatoes, or Mexican food to have cilantro and limes really changes the way we think about the past, I think.

So, to me, the fact that Ellen was casually mentioning the importance of chocolate in her very European fantasy world immediately inspired me to imagine who might have brought it over and why.

Of course, the actual historical circumstances of the Columbian exchange were colonialism, gross exploitation, death and cultural genocide. But one of the benefits of historical fantasy is that you don’t actually have to follow the course of history. You can imagine another way for chocolate and chilis and vanilla to have reached Europe—and why not through the very traders who were so powerful and resourceful throughout Mesoamerica?

Anyway, I must have gotten vastly over-excited about this idea, but luckily Ellen was just as excited by it as I was. I think that was when she mentioned that the project was a prequel and I just said, “If there’s chocolate, there are chocolate traders, and if there are chocolate traders there’s a whole other world of powerful people of color in the City that we have to know about.” Of course I was at this point already half in love and when the tea-drinking brainstorm turned into a real chocolate-drinking Tremontaine retreat, I was incredibly excited to be a part of it.

As I worked with Alaya and the other writers on Tremontaine, I dusted off my anthropological research skills and dug up some academic papers on the process of making chocolate in Mesoamerica. (I’m sure I over-researched.) It was wonderful fun to layer in economics and agriculture and even celestial navigation (the traders’ ships had to get to the City somehow) with the politics, drama, and love affairs that characterize the Swordspoint world.

I think that taking the time to root a culture in the ground—practically literally, at least when it comes to agriculture—brings a much richer world into being. And having that deeply layered background gives the characters’ motivations weight. Ixkaab Balam, the trader whose family controls a monopoly over the chocolate imports in the City, has real stakes when it comes to the family business.

The best part of working on this collaborative project was how much the other writers ran with that original inspiration and contributed so much more than any of us could have done alone. Malinda’s chocolate research was so intense that it gave me ideas for different elements that I could bring into my master’s thesis!

A few months ago I had the opportunity to make chocolate in a small town in Oaxaca, starting from plucking the fruit from the tree and ending with grinding up the cured and toasted seeds with sugar. Drinking the fruit of our labors, I felt this undeniable sense of completion and kinship with Kaab and her family. The story had gone full circle: the traders had commanded their own destiny to bring chocolate to the world of Riverside, and here I was, an immigrant in Mexico, drinking chocolate in the very territory where it was first developed probably more than a thousand years ago.

Chocolate was already present in the world of Riverside that Ellen had created. We were tasked with writing a prequel, whose particular challenge was to create something new while maintaining the continuity with the old. Chocolate was the key that opened up whole new worlds that were already present, but unexplored; it gave us the chance to change the point of view and see how the City looked from across the northern sea.