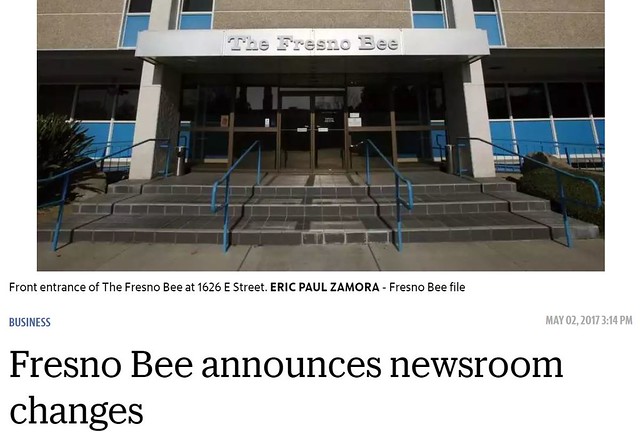 Well, this is sad news to me: The Fresno Bee, which is the newspaper I wrote for lo those many years ago, has basically killed off its local arts and sports coverage, in the process laying off eight reporters, including my very dear friend Donald Munro. Donald worked at the Bee for 26 years and basically inherited my job as movie reviewer (among other responsibilities) after I left to go to AOL. Donald’s own take on events is here; he’s his typically gracious self, which is probably more than I would have been in a similar situation.

I’m sad to see Donald and the others laid off, and I also think it’s penny-wise and pound-foolish to eliminate local arts and sports positions in the newsroom. Local news is the thing papers like the Bee (or the Dayton Daily News, my local) do that other papers can’t and won’t do, and which is actually needed — I mean, I don’t subscribe to the DDN for its national coverage. Local arts and sports is part of that coverage no one else will do.

It’s possible the Bee will now just freelance out that work; it’s cheaper that way and they won’t have to carry health insurance or retirement plans (which reminds me, hey, did you know that the GOP is even as I type this working really hard to make health insurance both expensive and useless to everyone again, especially the self-employed?). But here’s the thing — when arts and sports don’t have their advocates in the newsroom, even if editors remember to put them on their daily budgets, they won’t get covered as much, or as often. Which will make the Bee less useful to Fresno over time.

The Bee that Donald and I worked at 26 years ago — he had arrived just before I had, in 1991 — was a different place; it had just added a movie reviewer (me!) to go along with reviewers it already had on its entertainment staff for television, music, restaurants and local events. All those positions are gone now, along with many, many others, the casualty of the transition to digital and other economic forces in journalism. I miss it; I miss the features newsroom with all its clever and committed folks writing about what was going on in town.

Donald was my last link to that time, still in the Bee newsroom. And while I have no doubt he’ll land well, wherever he goes and whatever he does, I’m sad that link is gone now. And I’m sad the Bee is diminished. Whether it knows it now or not, they’re going to feel the loss. The Bee’s readers will, too.

28 Comments on “The Beehive Shrinks”