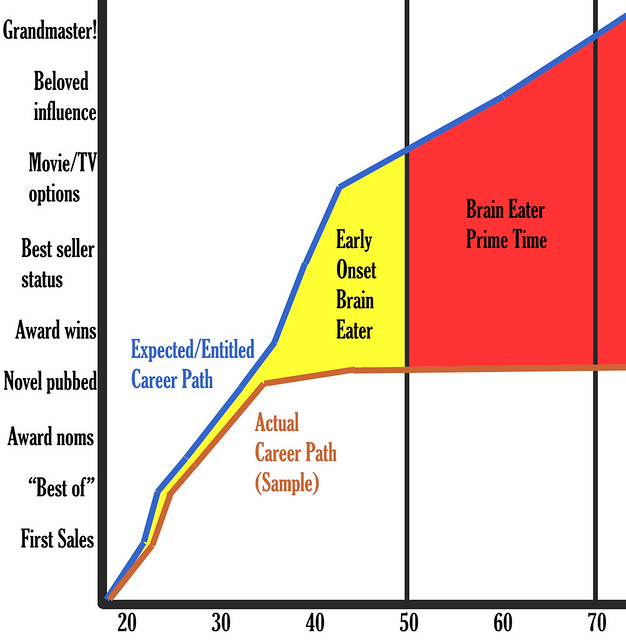 So, let’s say, there’s this writer.

(It doesn’t have to be a writer. It could be a musician, or painter, or actor, any aspirant in any creative or indeed competitive field, in which there will be many who participate but few who will end up on top, commercially or critically.)

So, again: This writer. He starts in his twenties in his field, writing short stories and perhaps working on a novel. And things start to happen for this writer. He gets work accepted by magazines and publishers. People start to talk about his work. He starts getting good notices and acceptance in his field. He begins to see his name pop up in conversations about the best work of the year, and selected for anthologies with the word “best” somewhere in the title. He has peers coming up with him. They hang out at conventions and book fairs.

One day, to his delight, as he edges into his thirties, he discovers some of his work has been nominated for an award, or possibly even two. Now when he goes to conventions and book fairs, his peers high-five him. When he sits on a panel, he no longer modestly suggests that he doesn’t know why he’s there when everyone else on the panel is so better known than he is. An agent at a convention asks him if he’s working on a novel (and of course he is, even if he wasn’t two seconds previously) and gives him a card and tells him they’d love to see it. Magazine editors invite him to submit. Anthology editors do the same, hinting that his name might even make it onto the cover.

The writer goes home and starts work on a novel. The agent likes the work and takes him on. When the novel is finished, the agent shops it — and it finds a home. The writer announces the deal on social media to the acclaim of peers and fans. The books goes out to reviewers and the first reviews are kind. The book hits stores and the sales are good! For a debut.

Our writer smiles to himself and says, now I am on my way. The path so far has been an unbroken upward road — not without challenges but one still clear and tractable — and from his vantage point he can see everything that lies on that upward path: More award nominations, this time for his novel(s), and then award wins. Then bestseller status and with it attention from film and TV producers. A novel is adapted into a film and launches the book into the stratosphere of general public consciousness. He’s liked, and admired, and in appropriate time new writers speak of him as a signal influence on their own work. From there, he garners his career awards — a Grand Master accolade, maybe a National Book Award or even a Pulitzer — and is comfortable in the knowledge that his work, his legacy, his part in the national conversation — is assured, even when he’s gone. This continuing upward path is not without its challenges, of course. Of course! But again, the path so far has been clear and tractable. There’s no reason for him not to be able to continue on it, predictably, inevitably.

And, then, one day, our writer looks around and he’s fifty. And he realizes that the book awards and the bestsellers and the movie deals haven’t come. He’s still publishing his novels (or maybe he isn’t), but he and his peers not part of the conversation like they used to be (well, one or two of them are. Just not him). His sales are slowly declining and some of his previous work is out of print. His agent admits that it’s harder to sell his work than it used to be. New writers — who are these kids? — are coming up and winning the awards, hitting the best seller lists, getting those TV and movie deals.

Our writer’s body is thicker than it used to be, and slower, and creaks. He’s not young anymore nor ever will be again. He’s not one of the Young Turks; he senses he’s barely part of the establishment. The new writers coming up treat him like just another writer; he’s not an influence, he’s just another jobber in the word mines. His upward path — that clear and tractable path, the expected and one would dare to say entitled path — is not the path he’s on. He’s on a path that has plateaued and indeed may be starting to run downhill, getting steeper as it goes.

How did this happen?

Well, our writer thinks, it can’t be because of him; he’s done the work, put in the words, is writing at the same level he always has. He’d been up for awards, back in the day, and doesn’t know why he shouldn’t still be. And it can’t be just be because sometimes, despite your best efforts, things don’t happen for you — that you could have been in the right place at the right time but weren’t, and someone else was, and they got a boost and you didn’t because on occassion that’s the way it goes. No, things don’t just happen, things happen for a reason.

And things, in particular, are happening to our writer — or more accurately, aren’t happening, because someone or a group of someones, are actively making it not happen. Our writer looks around at who is new, who is hot, who is making it in the field and who isn’t, adds up the anecdotal evidence that doesn’t involve the impossible factors of himself or just plain bad luck. And then he thinks to himself:

You know, maybe it really is the Jews keeping me down.

Or the blacks. Or the gays. Or the liberals! Or the Millennials! The lousy SJWs and the feminists! Or all of them! All at once! For starters!

And that’s when our writer looks up from the path, and in front of him stands the Brain Eater.

Who pulls out a spoon, cracks open our writer’s skull, and starts feasting, while our writer goes onto the Internet and talks angrily and at length about who it is that is keeping him from what he deserves.

Please note that this is just one representative example. Not every path to the Brain Eater is traced into the dirt like this particular one. Some come to the Brain Eater sooner; some come later. Some get further along in their career before they arrive at the Brain Eater, having won accolades and fame (but just not enough); some leap into its arms at the first available opportunity. What’s important is the gap, that wide space between where they think should have been and where they are now — and the “fact” that someone else, not them and not chance, is solely responsible for their failure to be who they are supposed to be, and their failure to achieve what they were entitled to achieve.

Please also note that no one has to come to the Brain Eater at all. Even folks statistically most susceptible to the Brain Eater can realize how much luck, circumstance and timing plays a part in one’s career, and resist the temptation to ascribe their own situation to a shadowy cabal out to defeat them personally. They might also realize that the “expected” path isn’t and never was real, and that nothing in one’s career or even life is ever a given.

There is no expected path. Believing that there is will only make you unhappy, and from there, bitter, and from there, blame-seeking. There is only the path you make for yourself and where it takes you, however long you choose to be on it.

Or, you can let the Brain Eater feast. It might make you feel better temporarily. But then you might find that what you’ve long suspected is actually true: People don’t want to work with you. Not because of some shadowy cabal directive but simply because people are reluctant to work with someone who descends into blame-seeking and bigotry when things don’t go their way. It’s unpleasant to watch and deal with, and people will suspect that if everything doesn’t go your way, sooner or later that your impulse to blame will be directed at them.

And thus the irony of the Brain Eater: It makes you become, by your own hand, the thing you suspect others were working so hard to make you be: A failure.