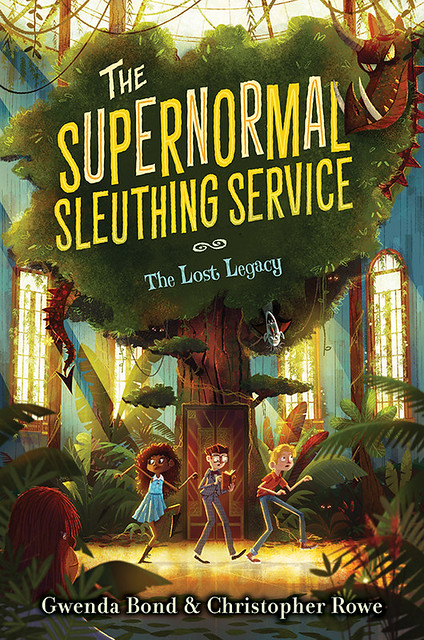 Gwenda Bond and Christopher Rowe are writers, spouses and collaborators on the middle grade detective novel The Supernormal Sleuthing Service: The Lost Legacy. So it’s only natural — and indeed perhaps inevitable — that they would collaborate on this Big Idea as well!

Gwenda: We decided to write our Big Idea essay in the same way we wrote this book–handing it back and forth–so you’re going to hear from both of us. I have always loved detective stories, and have a particular soft spot for that random being known as the Hotel Detective. People will tell you book ideas can’t come from procrastinating on Twitter, but I’m here to tell you they are dead wrong. This one did, in a roundabout way. I got a piece of luxury hotel email spam, which turned into a half-hour of twitter jokes about wanting an army of hotel detectives. In truth, I always had wanted to write a story about them, but how to do that for YA or kids (which is what I write)? Tough.

Cut to a couple of weeks later, when I woke up late on a Saturday and said to Christopher: There are kid hotel detectives because it’s a hotel for monsters! He immediately jumped in with ideas about a bigfoot stealing a kid’s breakfast and how the main character would be a new kid moving to town who’s the hotel chef’s kid and then by the end of our own breakfast we’d agreed to try writing the book together and that it would definitely be a book for middle grade readers. I joke that I knew this was a good idea because Christopher’s inner 12-year-old is very close to the surface, but the truth is both of ours are. Don’t tell him I admitted that, though.

Christopher: Hah! She admits it!

Kids solving mysteries in a hotel for monsters–or as they call themselves in our world, supernormals–turned out to be an enormously fruitful idea for spinning off other ideas: plots, characters, set pieces, even recipes (yes, recipes!). Sometimes, writing a story full of adventure and mystery can be quite a challenge in terms of, well, coming up with stuff. If anything, once we had our basic concept, we had too much stuff. The process of writing this novel was a ton of fun, and consisted of conversation, ideation, and a lot of basic sitting down and typing.

People have often asked us what the particulars of our collaborative process were, and really, it was very simple. We would talk–on walks, over meals, all the time–about the story and characters and cool new concepts we were each coming up with. We knew the larger plot arc from early on, so the writing became a daily exercise in asking one another “what happens in the book tomorrow?” and then, the next morning, putting what we’d come up with in the page. Gwenda would get up and write a thousand words, then I would get up, read what she’d written, and write a thousand words more. Do that for enough days in a row and hey presto, you’ve got a novel manuscript.

Gwenda: He left out the best part! Which is that when I’d get home from the office, he’d read aloud everything we had from that day. And do funny voices for the characters! A big part of what was so enjoyable about writing this book together (and revising it later) was the fun of collaboration coupled with writing a book that has quite a bit of humor. It was always a bonus if we could make the other person laugh with delight. I remember hearing every great Cindermass or Elevator moment Christopher wrote for the first time, because they made me crack up.

On a process level, we’re about as different as two writers can be with our own individual work. I like to talk out stories and love edits; my work only ever becomes anything in revision. Christopher, on the other hand, is much better at drafting. So it was also kind of great to have complementary strengths and weaknesses to draw on. And, of course, the best part of collaboration is you only do half the work, but get ALL the results. (This is probably not actually true, since you still have to do all the planning Christopher mentioned above.) What was most surprising about this process to you? Besides the fact we’re still married after writing this book and now having finished and turned in a draft of the second in the series.

Christopher: Most surprising? Probably the stuff that kind of just popped up in the writing process that we didn’t plan on. For example, speaking of the Elevator, one day it was my turn to write and I had to get the characters from the lobby to the roof. So they all troop onto the hotel’s sole elevator and I decided that, since elevator rides in real life are notoriously boring and people rarely talk among themselves once the doors have shut, to spice things up a bit. So I put in a sign with some stuff about what kind of supernormal creatures are allowed aboard (up to eighty pixies or three ogres) and aren’t (“our larger guests”). And then, for some reason, at the bottom of the sign I added “Do not engage the Elevator in conversation.” I had no idea what that meant, but since I’d written it, obviously somebody was going to engage the Elevator in conversation, and once the Elevator started talking back, we couldn’t shut it up. And it’s proven to be one of the most popular characters in the book. So, that’s both one of the most surprising moments and one of my favorite moments in the composition process.

Gwenda: You were supposed to say the joy of working with me. You can make dinner later. Or plot the next book in the series. ;)

3 Comments on “The Big Idea: Gwenda Bond and Christopher Rowe”