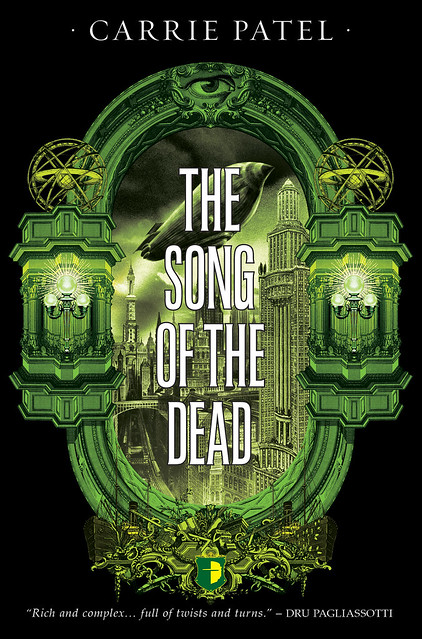 During the thinking about and writing of The Song of the Dead, author Carrie Patel came to appreciate traffic jams. Why is that? And how did it help in the construction of her novel? Patel is here to tell you.

One of my most vivid memories from grad school is of a negotiation exercise my first year. My classmates and I were divided into two teams in which we played researchers competing for a limited supply of a rare coconut. The premise was that we each needed it—and as much as we could get—in order to cure different diseases, and that winning meant having as much of the stuff as possible.

Game on, I thought.

For a half hour, we debated. We discussed the urgency of our research, the number of people we could save, and the benefits we could provide to society. After a civil and well-reasoned discussion, we divided up the coconut supply, and we all stepped back feeling like we’d won.

The catch was that one group only needed the fibers, and the other only needed the meat. We could have all gotten the maximum use of our coconuts if we’d only shared our full stories with one another. Instead, we made assumptions and went to battle because the story running through our minds was one of conflict.

If there’s one thing this exercise taught me, it’s that the stories we tell ourselves shape our goals, relationships, and outcomes. And that’s the Big Idea of The Song of the Dead.

A little background. The Recoletta trilogy is about underground cities that rise from the ashes of the Catastrophe, an unspecified historical disaster. To the people who live in the buried cities—Recoletta, Madina, and their neighbors—history is a thing to be feared. It’s a Pandora’s box of human evils, a story about how the wicked nature and dangerous technologies of ancient peoples led to their near-total destruction. Understandably, perhaps, the people of these cities see this history as a dangerous virus, and most of them want nothing to do with whatever story corrupted their ancestors.

For the third novel, I wanted to explore this idea about stories—how they shape people and how they create conflict—on a big, plot-wide scale and on a small, character-focused scale.

Zoomed out, The Song of the Dead was always going to be about societies that had built themselves up around different stories of the Catastrophe and about the conflict that those stories would inevitably rope them into.

That idea felt fresh, relevant, and compelling to me as a writer. There was just one problem: I didn’t even know the story of the Catastrophe. I just knew that it had to be massive. It had to explain the buried cities’ isolation and idiosyncrasies. It had to mean something to the characters in the present of the book.

And it couldn’t be the first thing that came to mind.

So, how do you develop a backstory that simultaneously pays off a mystery, contextualizes your world building, and motivates your current conflict?

Apparently with lots of brainstorming, pages of outlining, and some thoughtful car ride conversations with the husband.

At least there’s one reason to appreciate California traffic.

I won’t spoil anything except to say that I did finally discover the story my story needed, and after dusting my hands off over dozens of Scrivener files, pages of notes, and more than a few false starts, all I had to do was write the novel.

Fortunately, there were characters to help with that.

I wanted to give my series protagonists, Jane Lin and Liesl Malone, the same thorough treatment. Ever since I’d written the outline for Cities and Thrones, I’d wanted to bring these two women into conflict with one another. The challenge was to do that while maintaining them both as reasonable and well-intentioned people.

Fortunately, by the events of The Song of the Dead, they’ve been shaped (hammered, more like) by two very different stories. Each has a different version of the events that have pushed them to the edge, and they begin the novel glaring at each other across the gulf that has grown between them.

The Song of the Dead: Amazon | B&N | Indiebound | Powell’s