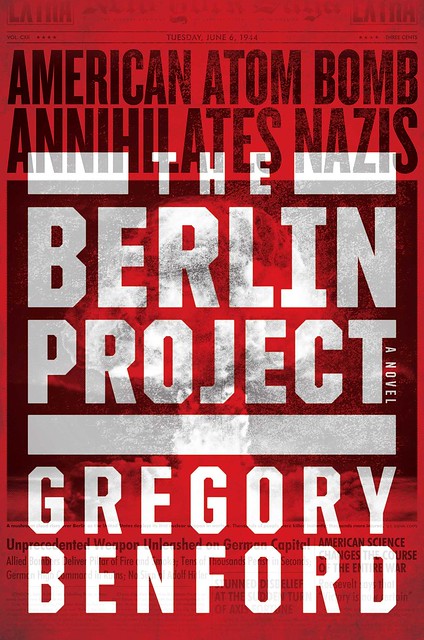 For author and scientist Gregory Benford, his new novel The Berlin Project isn’t just a matter of speculative fiction — Benford has some very real connections to the people and characters that play a role in his alternate history. Benford’s here to lay out where fact meets fiction meets friends and family in this tome.

I got the idea for this novel when I was working on nuclear matters as a postdoc for Edward Teller. Then decades later, heard it from the guy who was at its center, and who became my father in law, Karl Cohen. All that came together when I decided to go back to writing novels in 2012.

The year 1967 seems so distant now. I was finishing my PhD thesis in theoretical physics when two of my thesis advisors took me aside and said that, just to be safe, I should apply for two postdoc positions, not just one. It was that long ago. I turned down UC Berkeley, a professorship at Royal Holloway College, London (which had read a published paper and wanted someone in that area; I’d never heard of them).

So I decided to work with Teller. In the course of many calculations and conversations, he told me of a turning point in World War Two that few knew. I heard it later from Karl Cohen:

When Japan attacked Pearl Harbor, the effect on the US atomic program (Manhattan Project) was a one-year delay. The US Army was preoccupied with the new war in the Pacific; they failed to appoint a person to head the Manhattan Project with enough power.  In 1941 the people in charge favored Urey’s centrifuge approach to producing the fuel instead of gaseous diffusion.

By 1942, General Groves was in and Urey was out of favor.  Building the gaseous diffusion plant took longer than expected, and the result was a one-year delay in the project. The delay meant that the target changed away from Germany. The object of dropping an A-bomb over Germany was to prevent an invasion.

How many more concentration camp victims would have survived if the war had ended one year earlier?  For one, Anne Frank. Most CC victims succumbed eventually to the rugged conditions… The difference between 1944 and 1945 as the end of the war is probably quite significant in terms of lives.

The central context for this novel came from the protagonist I chose to follow through it, Karl Cohen. I also folded in my experience of living in the US occupation of Germany in 1955-57, where my father commanded combat units.

Karl’s words made me think, because in the last year of war, whole societies collapsed. A million died each month, the Soviet Union captured many countries into subjugation, and the devastation of the Axis powers took decades to repair.

Alternative histories are ways of thinking. The entire history of nuclear weapons is interlaced with scientists considering the future, often using science fiction as a prompt. The 1913 “atomic bombs” of H. G. Wells and the Robert Heinlein and Cleve Cartmill stories in Astounding Science Fiction were indeed broadly discussed at Los Alamos –as told to me in detail by Teller.

The wartime investigation into the Astounding stories, as I depict from documents I found, now seems odd indeed. The fiction writers had no classified information at all, just good guesses. Still, this possibility was viewed as very important by the security agencies, including the FBI. As Robert Silverberg has wryly remarked, “Turning war secrets into second-rate SF stories might seem, to the dispassionate eye, a very odd way indeed of betraying one’s country.”

Karl Cohen was my father in law. In 2000 he was voted to be among the 50 most prominent American chemists of the 20th Century. But he was haunted by what he felt was his personal failure to convince the U.S. government to pursue the centrifuge approach during the war. He died in 2012 at age 99. Alas, I had only begun on the novel.

I chose to portray that era through the people I knew who were embedded in the science side of the conflict. Any portrayal of real people in fiction is an interpretation, but knowing them certainly helps.

I knew personally many figures in this novel: Harold Urey, a Nobelist who first greeted me and my twin brother at the grad students reception at UCSD in 1963; Karl Cohen, my father in law; Edward Teller, my mentor as his postdoc at Livermore Lab; Maria Goeppert Mayer, for whom I graded the homework and exams in her graduate nuclear physics course at UCSD; Freeman Dyson, whom I met at the UCSD daily coffee in 1963; Leo Szilard, another coffee break savant; Luis Alvarez, whom I invited to give a colloquium at UCI, because I wanted to meet such a fabulous character, and whose account of the Hiroshima bombing I used here; Richard Feynman, an idol to all of us; Sam Goudsmit, raconteur extraordinaire; Paul A. M. Dirac, Nobelist; John W. Campbell, editor of Astounding; Fred Reines of UC Irvine, Manhattan Project physicist and winner of a Nobel in 1995; Arthur C. Clarke, who was a radar officer in the war and then a science fiction writer. Plus many others. I have tried to echo their manner of speaking and thinking. Indeed, I included my own father, James Benford, who went into Normandy on the fifth day of the invasion and fought across France, Luxemburg, Germany and Austria.

Further, every document quoted in the novel is authentic, though some have dates altered to conform to the plot.

WWII is the drama that keeps on giving, for it touches on many problems we have today, especially the role of all-powerful weapons like nuclear, biological and chemical ones. 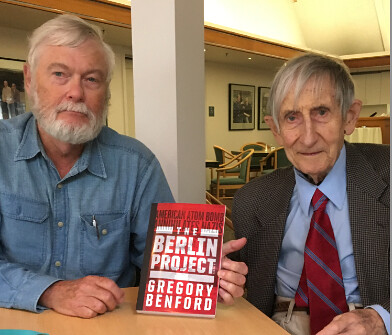 One of the major characters is still alive: Freeman Dyson, now 93. I gave him an advance copy recently, as the photo shows. He liked the novel’s “specific premise,” as he put it: that the errors in judgment at the beginning years of the Manhattan project might well have gone differently, yielding a very different World War II. At the end of The Berlin Project we get to see that world in 1963, the year I began graduate school.

There are plenty of wars since, but none like WWII, which killed 29 million Soviets alone, and over 60 million in total, about 3% of the world population (over 80% of them among the Allies).

Such a mixed nuclear and tactical war could lie in our future, so this thought experiment has implications for our real world in the 21st Century. The next war that sees nuclear weapons used will probably also involve substantial ground forces. Think of Pakistan-India and the deep angers of the Middle East, where resort to nuclear weapons seems inevitable among demons posing as religious purists.

But my major reason for writing The Berlin Project came from the sheer fun of it. The physics I knew already; I helped design tactical warheads while a staff member at Livermore, after my postdoc, and before I became a professor at UC Irvine. The intricate interplay of great minds in pursuit of a desperate goal, the Manhattan Project, I did not know well.

But I learned, pouring through much history buried in obscure documents. I found the ID badges for the Manhattan Project and put them in the novel, along with dozens of pictures from that era. In an historical novel, show the reality as much as you can.

My sense of the story gathering momentum as the war changes its flavor drove the writing. The battles change, the possibilities blossom. This has been perhaps my most enjoyable project, ever.

Listen to an audio excerpt. Visit the author’s site. Visit him on Facebook.