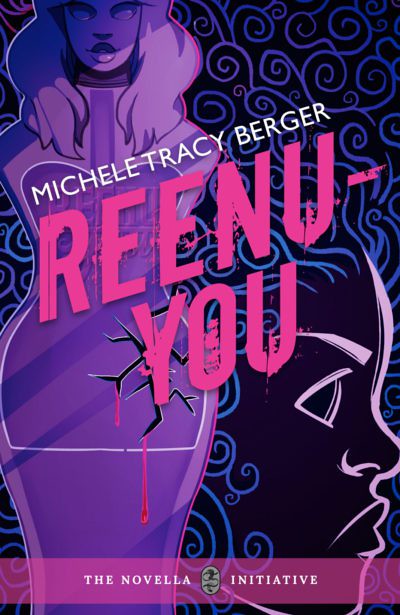 Hair matters, in a lots of ways we (or, well, I, a balding middle-aged white dude) don’t often think about. But Michele Tracy Berger has, and has made it central to her novella, Reenu-You. She’s here now to talk a little about hair, about culture, and about her work featuring both.

What if a visit to the salon could kill you? What if a hair product harbored a deadly virus? My Big Idea is about viruses, the politics of beauty and unlikely female heroes.

Hair and hair culture is often unexplored territory for many speculative fiction writers. Despite the wonderful world-building of the genre, the social economy of hair maintenance, styling and product manufacturing is rarely discussed. This is a shame as there is a rich story in conversations of hair and haircare, as they often embody the complexities of the U.S.’s racial legacies. In Reenu-You, hair is the catalyst which sets the stage for conflict, friendship, desire, misunderstanding and an epidemic.

We follow two characters, Kat and Constancia. While different in many ways, these women share an experience of haircare; they both use a new product called “Reenu-You”. Within days they find themselves, along with other women of color, covered in purple scab-like legions— a rash that pulses, oozes, and spreads in spiral patterns. They are at the epicenter of a mysterious virus spreading throughout the city.

I’ve been interested in hair and what people make of it since I was a little girl. Beauty practices reveal a lot about what is acceptable and encouraged in a culture. There’s pain and joy in how many African Americans (and other people of color) experience their hair.

Let’s start with joy. Black people experience the aesthetics of hair as a space of creativity and innovation (e.g. ‘the Afro’, ‘the fade’, ‘cornrows’, ‘braids’, ‘the weave’, etc.). Growing up in an urban African American community, talking about, reflecting on and styling hair was a particularly important and fun aspect of my young adulthood. Beauticians held high status in my neighborhood. They nimbly moved from therapist to healer in a blink of an eye. I thought they were magical. They were like modern day shamans whose tools were metal hot combs, big pink rollers, slippery, translucent gels, and hair oils that smelled like exotic fruits from faraway lands.

But there’s pain, too. Black and brown kids often encounter the words nappy, kinky, and wooly, as pejoratives. Faced with this judgement, many internalize the belief that their hair is bad, or unmanageable. Most Black people have had to think critically about their hair, how they feel about it, how their community feels about it, and how dominant culture feels about it. I did.

I understood at an early age that there were unspoken rules about hair. “Good hair” was straight and bouncy, like the women in commercials.

I was usually in the camp of having “good hair”, frequently getting stopped on the street by people telling me I had pretty hair. These comments made me deeply uncomfortable, but, gave me a kind of social power, too.

What’s the origin of these ideas? Beauty standards, in this country, have historically favored long, straight hair stemming from dominant norms. Slave owners often referred to enslaved people’s hair as “wool”, like that of an animal.

These dominant norms were imposed on enslaved people and over time inculcated long-standing ideas about social status and worth. Straight hair (and lighter skin) over time became intertwined with a rigid definition of beauty. These societal standards and individuals’ experiences shape the complicated factors that play into why some minority women use relaxers.

In my novella, the product Reenu You seductively promises an all-natural, healthy chemical-free fix to its customers –it’s billed as a hair tonic.

Although no viruses have popped up yet in women’s hair products, there’s a long and troubling history about the safety of hair relaxers. At the turn of the 20th century, the African American press reported that white-owned companies were perhaps not producing high quality hair products for their primarily Black clients.

The idea for Reenu-You developed as I watched the 1990s ‘Rio’ scandal unfold. The World Rio Corporation released a product known as Rio, billed as a natural hair relaxer. Rio was marketed almost exclusively to Black women, as an alternative to traditional relaxers.

Soon women around the country were reporting horrible reactions to Rio including itchy scalps, oozing blisters and significant hair loss. A class action lawsuit revealed that there was nothing natural, at all, about Rio. At a closer look, Rio contained a number of highly acidic chemicals!

These lawsuits continue to pop up. Presently, L’Oréal is facing a class action law suit that claims several of its hair relaxers produce harmful conditions. Also a new report by the Environmental Working Group (EWG), a nonprofit and nonpartisan organization, documents that many beauty products “targeted toward Black women are less healthy”.  Hair relaxers are at the top the list. In fact, researchers are investigating the possible connections between hair relaxers and occurrences of lupus and fibroid tumors.

Reenu-You digs into the uncomfortable space of hair and identity, leaning into all of its potential for joy and pain. I wanted to play with the trust we have as consumers about the safety of our most intimate products and raise questions about who is valued as a consumer and patient.

The stakes are higher in the novella than in the Rio case. I’m hoping Reenu-You will create more awareness about these real-life beauty horror stories.

I hope readers will carry the characters and their stories with them. The next time they visit a salon or are about to use a favorite conditioner, hair gel or dye, they might consider, what’s really in these products?