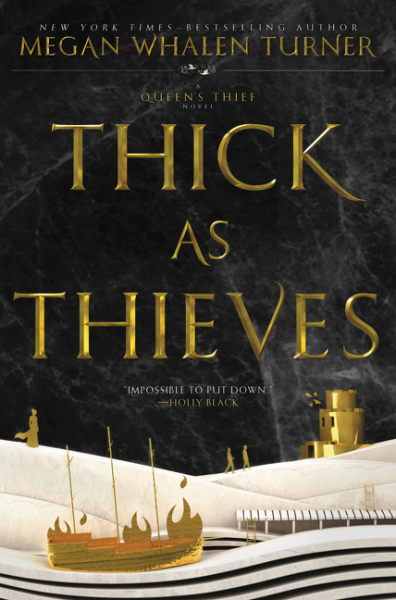 Sometimes the Big Ideas for books have their origin in other books, and how those books inspire us when we write our own. For her new book Thick as Thieves, Megan Whalen Turner reaches back to a favorite author and how that writer’s big idea laid the groundwork for hers.

Back in the last century, authors only knew what their readers were thinking if their readers sent them fan mail—written on the bodies of dead trees—or if their readers were reviewers for print outlets like the New York Times or Kirkus. And then, around the time my first novel, The Thief, was published, Amazon introduced online reviews and bloggers started putting up posts about what they were reading. Suddenly ordinary people had a voice in a much larger conversation about books.

As a newbie author, I was self-Googling like mad and just before The King of Attolia was published. I found a livejournal site dedicated to my books. I lurked. I did tell them I was lurking, but I knew right from the start that having authors around is a great, wonderful, exciting thing—right up until they make it impossible to have an honest conversation about their books, so I was careful not too lurk too often. In return, I got to watch these smart, funny people pick through everything I’d written and I became more and more convinced that they didn’t need my input, anyway. Everything in my books that I hoped they’d see, they were pointing out to one another. Watching them, I decided I should probably probably keep my mouth shut and leave readers to figure things out for themselves. That’s why when they got around to sending me a community fan letter, I’m afraid that my answer to most of their questions was, “I’m not telling.” Over the years, it’s hardened into a pretty firm policy.

That doesn’t mean I don’t talk about the books, about writing, about what’s hard or easy, or about where my inspiration comes from. I just try not to add information about the stories that’s not already on the page or offer my opinion on what anything in particular means. Sometimes I blow it, because I like to talk too much, but I try not to. Making up your own mind about a story, or sharing stuff with other readers, is the part of the fun of reading.  I never want anything I say to short circuit that process.

This does make writing a Big Idea piece tricky.

Fortunately, our host has a pretty wide definition of what constitutes a Big Idea and even whose Big Idea we need to talk about anyway. So, instead of starting with my book, I’d first like to talk about The Eagle of the Ninth by Rosemary Sutcliff. Sutcliff was a British author. She suffered from juvenile rheumatoid arthritis and she wrote the kind of books that she wanted to read during the long hospital stays of her youth. Back then, the boys’ ward had the “boy” books and the girls’ ward had the “girl” books and Sutcliff had to rely on sympathetic nurses to sneak the boys’ books over to her.

In The Eagle of the Ninth, a new centurion comes to Britain with big plans: serve the empire, get his veteran’s pension, and buy back his family’s farm. And then, in his first battle, all his plans go up in smoke. His leg is broken and he has to face the fact that he might walk, but he will never fight again.  Seeking some new purpose for his life, in a journey both physical and psychological, he travels north of Hadrian’s Wall to retrieve the lost Eagle of the Ninth Roman Legion. His new slave, Esca, goes with him and, of course, they both come back free men.

Sometimes when a light bulb comes on in our head, it’s not because we had a Big Idea, it’s because someone else reached in and flipped a switch. When I was about fifteen, Rosemary Sutcliff did that for me. The term “plot armor” hadn’t been invented when I watched Sutcliff destroy a writing convention in her very first chapter. Serious injuries and death were only supposed to happened to red shirts. The Eagle of the Ninth made me wonder for the first time, just who gets to be the main character in stories of heroism and adventure.

I knew that when I wrote Thick as Thieves, I wanted to revisit Sutcliff’s story, and I knew that I wanted to focus on Kamet, the enslaved secretary to Nahuseresh, a prince of the Mede Empire. Kamet is educated, he’s entrusted with the management of his master’s entire household, and he’s ambitious.  He may not see freedom in his future, but he sees power. When an Attolian soldier first offers to help him escape from his master, he laughs it off—until a friend warns him that his master has been poisoned and Kamet will be blamed for the murder.

Initially reluctant, Kamet takes up the Attolian’s offer and flees the Empire. For the soldier, this story is a quest. He’s been given a task by his king and he means to carry it out. For Kamet, the trip is a means to an end, and it doesn’t have anything to do with the Attolian king. He has his own agenda and this is his story.

As Alexis de Tocqueville once observed, “The evil one suffered patiently as inevitable seems intolerable as soon as one conceives the idea of escaping from it.”

Read an excerpt. Visit the author’s site. Follow her on Tumblr.

← Robots vs. Fairies: I’m In This
The Big Idea: James Kakalios →