I’m not writing about Trump and his party pals as much as one suspects I might here, and honestly, here’s the reason for it: Everything is happening so damn fast these days. Hard as it may be to believe, if I’m going to write something more than a snarky tweet, I want to be able to actually think about the thing and frame it in my head, and every time I try to do that, by the time I’ve figured out what I want to say, that dense, angry Tribble-scalped bastard has done something else, and I have to rethink. I literally can’t keep up, especially because I’m trying to do other things, too, like write books.

It’s frustrating, because I have a lot I’d like to say. It’s just that by the time I would say it, it’s already three news cycles back, and all I’m left with is me howling SEE I TOLD YOU THIS SHIT WOULD HAPPEN, and really, now, how often can I say that before it gets boring.

So: Sorry, folks. I’m trying my best. But Trump watching isn’t actually my full-time gig. And it’s really hard to keep up. 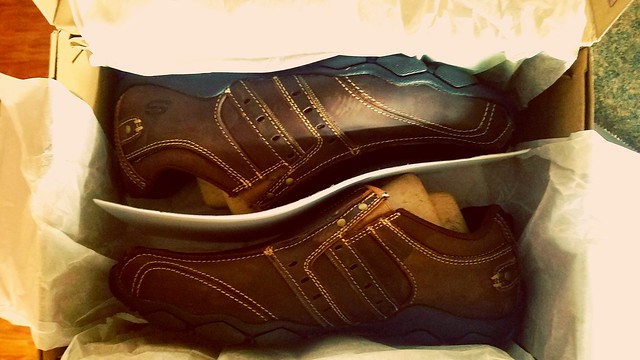 Behold the Sketchers Men’s Diameter Slip-on, size 8.5, which just arrived here at the Scalzi Compound. This is the third pair of these that I’ve gotten, the first having been purchased more or less on a whim three years ago at Sears, back when you could still go into Sears without being crushingly depressed at how far the store had fallen. The shoes are super boring — there’s really nothing that calls your attention to them. I wear them because they’re cushioned and have arch support, and because they’re easy to take off and on at the airport. They are, in effect, designed to be worn by middle-aged men who value comfort over fashion, which is, basically, me.

I came to these shoes reluctantly, I’ll note. I was a devotee of Vans slip-ons for years but a few years ago had to come to terms that Vans slip-ons are not actually designed with the “increasingly middle-aged” demographic in mind, since they have zero arch support, and wearing mine to conventions or anywhere else that required lots of walking meant having feet that felt like they were being stabbed by the end of the day. I still love Vans and have a couple of pairs, but I save them for short trips and lazy days. For other every purposes: Super boring, cushy Sketchers above.

(I suppose I could find prettier shoes with equal arch support, but, meh. These work well enough, and they’re relatively inexpensive. I have dress shoes when I need dress shoes.)

The funny thing is that when I wear these shoes, every once in a while another middle-aged dude will compliment me on them, and I’ll look down and see him wearing the same shoes. Because he’s a middle-aged dude and he knows. Arch support, man. It’s a thing. 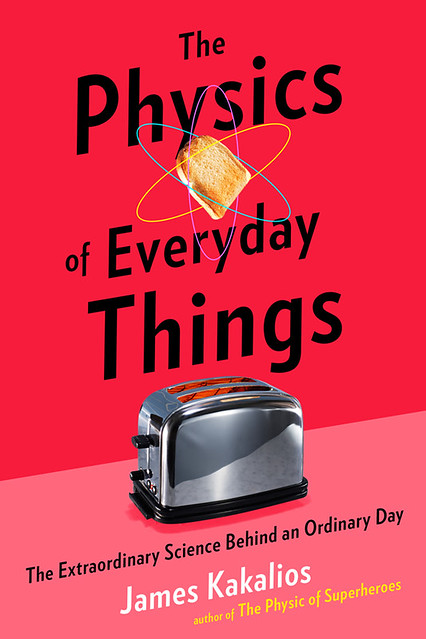 Physics happens — today and every day. But how much do you think about the physics of your ordinary day? James Kakalios thinks about it a lot, and after this Big Idea piece for his latest book The Physics of Everyday Things, you might think about it more often, too.

My motivation to write The Physics of Everyday Things derived from comments from people like my cab driver father, who would ask me, back when I was a physics major in college and would describe to him some recent discovery in particle physics or astrophysics: “That’s nice – but how does this change my life?” Breakthroughs such as the discovery of the Higgs Boson or ripples in spacetime (gravity waves) generated by the collision of two super-massive black holes warrant all the attention (and Nobel Prizes) they receive.

But equally deserving of notice is research on the human scale, the domain of solid-state physics and materials science, which is my particular field of study. More physicists work in these fields than in any other. They address fundamental problems involving the quantum nature of matter—that might sound abstract, but those questions can often lead to practical applications, such as the transistor and the laser. From high energy-storage batteries that power hybrid and all-electric cars, to the EZ-Pass device that lets us zip through toll booths, to the self-parking feature we might use to maneuver into a tight spot, my father, if he were still with us, would likely agree that scientists and engineers have certainly changed automobiles—and thus, would have changed his life.

All of our lives have indeed been changed thanks to scientific research (and much of it supported by the federal government, so to all you taxpayers reading this, take a bow). The technology we take for granted, from the smartphones in our pockets, to touch screens to MRI’s, can sometimes seem like magic. As a physics professor, I feel it is very important that I emphasize to the general public that these devices really are magic!

Of course, I don’t mean anything mystical or supernatural like you’d find in Marvel’s Dr. Strange, but rather the magic in a Penn and Teller show in Las Vegas. In the latter, physics principles are not violated but are exploited in order to create dazzling effects. Similarly, the amazing and indispensable devices that we use every day are only possible due to our understanding, gained over the past hundred and fifty years, of the rules by which the natural world operates. While professional magicians are bound to not divulge their secrets, in The Physics of Everyday Things I reveal how the “magic” of the technology we routinely employ is accomplished.

However, I did not want this book to be simply an encyclopedia of technology, with listings from alarm clocks and batteries to x-rays. How to tell a story that also explained the physics underlying the devices that surround us? My first (unsuccessful) attempt used the history of technology to introduce the concepts that underlie modern devices. This draft sucked. For those interested in the history of science, there wasn’t enough of it, and readers who didn’t care about history had to slog through too much of it before they got to the parts they wanted.

The Big Idea for the book came from my editor at Crown (the talented Domenica Alioto) who suggested that we drop the history, and begin the story by examining the devices people employ at the start of the day. I instantly realized that this would be structure of the book (which would turn out to be the subtitle): the extraordinary science of an ordinary day. The book would follow “you” through a busy day, from moments before you awake to when you drift off to sleep at night. You start your day, drive into the city, go to a doctor’s appointment, then on to the airport. Passing through the TSA checkpoint, you take a flight to another city, where you give a business presentation, and finally check into a hotel.

Whenever you interact or employ modern technology—from your toaster while making breakfast, to withdrawing money from an ATM, to making a photocopy, to watching the flat-screen television in your hotel room—I would interrupt the story and explain the physics principles underlying these devices. Domenica’s suggestion of a “narrative physics” was the Big Idea the book needed. This way we would get straight to the good stuff, and in describing the story of your day, I could write a popular science book in the second person singular.

While writing this book, I found myself observing my day with fresh eyes, noticing technology that I previously took for granted. For example, I paid attention when the motion sensors turned on the lights as I walked down a darkened hotel hallway. This gave me an excuse to research how these sensors worked. I previously had assumed that they all operated as a version of “radar,” where a signal was sent out and the device noted if a moving object interfered with the reflected wave. While some motion sensors do indeed use this “active process,” many lower power sensors are “passive” and instead use pyroelectric detectors to register the infra-red radiation you emit. I was excited to learn this because (a) I did not know this and thought it was cool; (b) it would give me a reason to explain what a pyroelectric material is; and (c) I could then show the connection between these materials and piezoelectrics such as quartz crystals used to keep time in your smartphone and computer.

Writing this book led to a new appreciation of how only a handful of physics principles are necessary to understand the broad array of technology that has changed our lives. This is, in fact, not just a Big Idea but the Giant Idea of the book. The universality of physics means that insights into nature that enable infra-red light emitting diodes and photoreceptors (the basic elements of a television remote control) also apply to pyroelectric-based motion sensors and account for the heat trapping properties of greenhouse gases. The physics is the physics. By the end of this short book, I hope the reader will develop a “physicist’s intuition” (“I totally knew it was going to be capacitors!”) and can anticipate the explanations of how everyday things work.