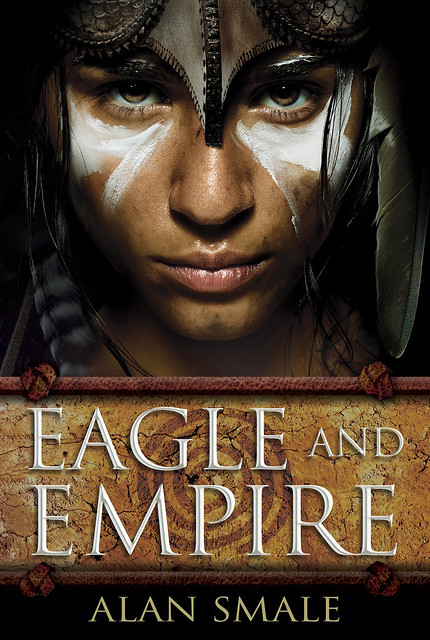 Creating alternate histories are no small matter, especially when your series of books features a different version of the Roman Empire landing in North America. Now in Eagle and Empire, the third book of his Clash of Eagles series, Alan Smale talks about the challenges of writing different past — and making more history as one goes along.

I’ve long had a fascination for books that tear up the world and patch it back together differently, for really large alternate histories; not picking my way gently forward as changes begin to ripple from a point of departure deep in the Napoleonic Wars, say, but witnessing the far-downstream effects of a giant splash. Those are the tides I’m riding with the Clash of Eagles trilogy, in which the Roman Empire survives in its more-or-less classical form through to the thirteenth century, and is now trying to open up Nova Hesperia – North America – with substantial assistance from the seafaring Norse who “discovered” it first.

The point of departure for my alternate timeline is way the heck back in 211 A.D., with Geta defeating his malevolent brother Caracalla after a decade-long firestorm of a civil war that nearly splits the Empire. As Emperor, Geta then ushers in extensive reforms. His actions unwittingly ward off the Crisis of the Third Century while strengthening the Empire against “barbarian” invasions, and, sure, I have Appendixes in the Clash of Eagles books laying out the details. But my characters don’t spend a whole lot of time rehashing the dusty events of a thousand years past – they’re much too busy running around and dodging pointy missiles and trying to stay alive.

So, let’s review: in Clash of Eagles, Gaius Marcellinus and his legion march in from the Chesapeake Bay and get their rear ends handed to them, first by the Iroquois, and then by the warriors of the great mound-builder city of Cahokia, on the banks of the Mississippi where St. Louis is now. For Book One, the Big Idea was: “Ancient Rome invades North America when the Mississippian Culture is at its height.” In the second book, Eagle in Exile, Marcellinus is – as you might guess – largely separated from Rome and from his new Cahokian home base. There’s a coup in Cahokia, and a vicious despot replaces the more measured and even-keel Great Sun Man who originally kept Marcellinus alive.

Before you know it, Marcellinus is cast out with a handful of friends, navigating the untamed Mizipi River on a Norse longship, fighting off threats from all sides. The Book Two Big Idea: “wild adventure in an ancient North America, in the process standing that comfy Dances with Wolves trope on its ear.” (Suffice to say that Marcellinus’s attempts to help always have unforeseen consequences, and also that his loyalty to Rome is not so easily tossed aside.)

Okay, so welcome to Book Three, Eagle and Empire. More legions have marched into Nova Hesperia by way of the Chesapeake and the Gulf of Mexico, commanded by the Emperor Hadrianus III himself. But meanwhile, meanwhile, the Mongol Horde is landing on the west coast and crossing the Rockies. Having had his plundering ambitions in Asia thwarted by the solid power of Rome, Genghis Khan has set his sights on the brave New World, and so one aspect of the Eagle and Empire Big Idea is “a titanic confrontation between the Mongol Horde and the legions of Rome on the Great Plains of North America,” a terrain which naturally benefits the nomad horsemen of the Khan.

Needless to say, the various nations and tribes who were already living on the Hesperian continent have their own very strong opinions about all this, and have continued to take independent action. Cahokia is now first among equals of a great Hesperian League, an alliance between disparate tribes that in the past sometimes made war with each other and sometimes simply ignored one another, but who are now forced to work together to resist the dual (and dueling) forces stomping all over their various territories. Other tribes cast their lot with Genghis, for various reasons, and so the stage is set for all manner of internecine carnage.

But now let’s home in on the human element, the soul of the story, behind all the cut and thrust and steel and shine.

Geopolitics aside, Marcellinus has a basic and central conflict between his old life as a Roman general , and his new life of family and community in Cahokia. He has friends and loved ones, duties and responsibilities, and many of these people and factors are at odds with one another. He has sworn several oaths he can never break, but even some of those oaths collide.

The three Cahokian children who were tasked with learning the outsider’s language back in Clash of Eagles have grown up to become influential in Cahokian society by the time Eagle and Empire begins. Tahtay is now War Chief of Cahokia, and a leading figure in the Hesperian League. Kimimela is a warrior and budding clan chief; she’s Marcellinus’s adopted daughter, but spends more time opposing him and working around him than chatting cheerfully with him by the camp fire. And then there’s young Enopay, not at all martial but empathic about people and an all-around smartypants: as a sometime-admirer and sometime-manipulator of key Romans, he also has his part to play in how this all resolves.

So another Biggish Idea that threads through Eagle and Empire is the complex interaction-space between all these different people (and peoples), their differing beliefs and motivations, and the irresistible-force-meets-immovable-object nature of Marcellinus’s challenges as a somewhat loyal Roman and eventually-decent human being, deep in the midst of this continent-wide upheaval.

And if you do read the books, and we meet up in the bar at a con sometime, maybe we’ll talk about what the world of the Clash series might look like after another thousand years has gone by and the events of Eagle and Empire are, in their turn, buried in the distant past. I have a few ideas about that too, of course…

← My Trump Quandary
Once Again News is Coming in Too Fast to Process Intelligently, So Here, Have a Picture of Krissy →