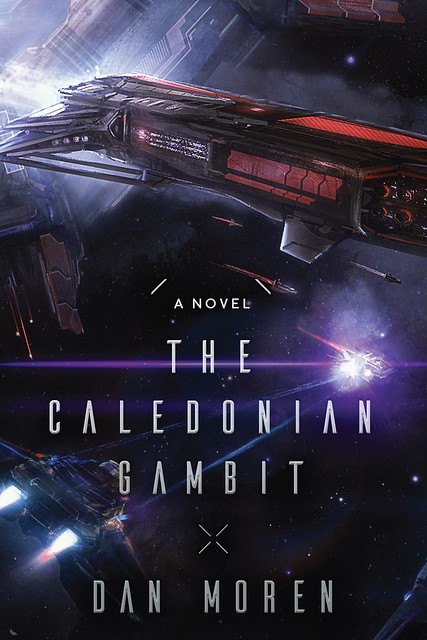 Travel expands the mind — or so they say. What would Dan Moren, author of The Caledonian Gambit, have to say about that particular truism? As it happens, he has a story on the topic, one that has bearing on the story he tells in his novel.

In January 2001, during my junior year of college, I got on a plane for Scotland. This was significant for a few reasons. For one thing, I’d never left the country before. For another, it was only the second plane flight I’d ever taken, and the previous one had been nearly a decade earlier. And even more to the point, I wasn’t just going for a week’s vacation—I was moving there for an entire semester.

I was terrified, and had a minor anxiety attack in the car on the way to the airport. But I got on that damn plane anyway.

Hours later, jet-lagged and haggard, I hopped into a cab in Edinburgh that would take me to my home for the next six months. I tried not to feel like too much of an idiot when my addled brain at first couldn’t parse the thick brogue of the driver, but I eventually realized he was asking where I was from. “America,” I replied, in a daze, only to have him fix with me a bit of a look and say, “Yes, I know that. Which part?”

Looking back on those months now, I tend to view them fondly. The years have dimmed the intense feelings of isolation and loneliness incurred by the several-hours time difference, not to mention the ocean, that separated me from my friends and family back home. My floormates were welcoming enough, but I was so overwhelmed with everything that was new and different that I retreated into myself, spending most of the time that I wasn’t in class exploring the city on my own.

From the vantage point of a decade and a half later, I still wouldn’t trade that experience for anything. For one thing, it gave me a real taste of leaving home. It made me more self-reliant and resilient, and taught me that I am capable of handling whatever life throws my way. I made friends with my floormates eventually, and I got to travel not only around Scotland and England, but also around a host of countries in Europe, an opportunity I probably wouldn’t have had otherwise.

But for all of that, I have never been quite so glad to come home at the end of the semester. If I’d felt a little more assured about the cleanliness of the airport floor, I would have dropped to my knees and planted a big fat kiss on it.

It was only a year after my time in Scotland that I first started sketching out the idea for a big sprawling space opera—a series of books inspired by the likes of Timothy’s Thrawn trilogy and Lois McMaster Bujold’s Vorkosigan Saga. I wanted to create a universe that felt real, felt lived in, because that was what I loved about those stories.

But as I started writing the first draft of what would eventually, many years later, become The Caledonian Gambit, I realized that the story of a washed-up pilot and the squad of covert operatives with whom he teams up didn’t really feel like those stories. Instead it felt hollow—like it had no sense of place. Even set as it was against the backdrop of a galactic cold war between two human factions—the bellicose Illyrican Empire and the ad hoc Commonwealth assembled to oppose it—it needed a more concrete anchor, a sense of what these sides, and the characters that served them, were fighting for.

It wasn’t until several years afterward that I finally found the heart of the story, and it came from looking back at my time in Scotland. I realized that this wasn’t just a story about big galactic conflicts, but about the smaller challenges that we all face.

It was a story about going home.

Eli Brody, the protagonist of The Caledonian Gambit has been away from home a lot more than six months—try nearly ten years. He couldn’t leave his homeworld of Caledonia fast enough, even if escaping that dirtball meant joining up with the very forces that had invaded and occupied it. And he would have been plenty happy—or, at least, so he told himself—never to set foot on that planet again. Until covert operative Simon Kovalic shows up and asks him to do just that.

Kovalic’s a man without a home, too. He’s from Earth, which, like Caledonia, has been under the thumb of the Illyrican Empire for two decades. Unlike Eli, Kovalic’s dedicated his life to fighting back, trying to reclaim the home that he had to flee when the Imperium came.

In fact, everybody in The Caledonian Gambit is fighting for their home in one way or another. Both Eli and Kovalic’s homes exert a gravitational pull on them, as if keeping them in a long, irregular orbit. Ultimately, they’ll swing back around and have to come to terms with the homes that they left behind. And neither of their homecomings is likely to be as much of a relief as mine was.

As much anxiety as I had about moving to Scotland, the years have shown me that leaving home is an integral part of figuring out who we are. Even if we ultimately end up returning, well, you have to leave in order to come back. In stories, the hero’s journey is predicated on this idea, but it’s no less true for our own lives. Whether our home is as small as a patch of dirt, or as big as an entire planet, there is—as they say—no place like it.