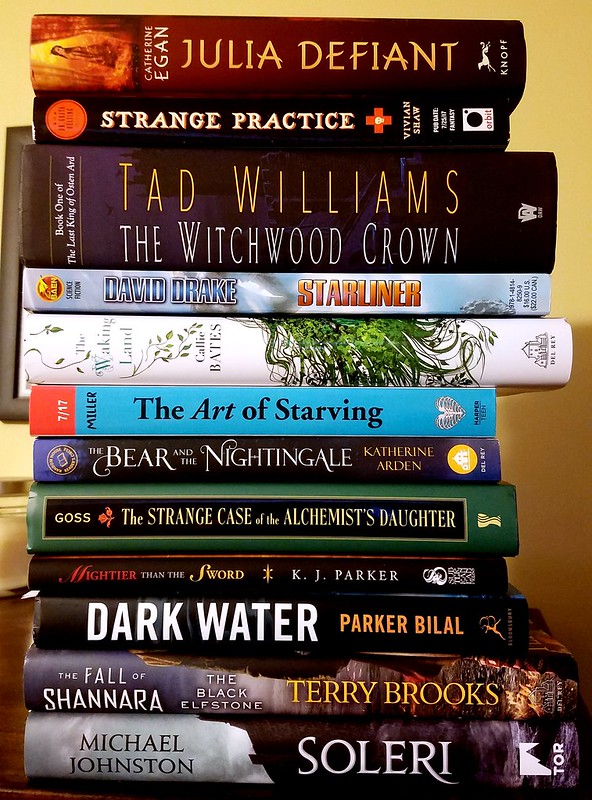 You look like you might be interested in a big stack of books and ARCs, so, hey, here’s a stack matching that very description. What moves you in this stack? Tell us in the comments! 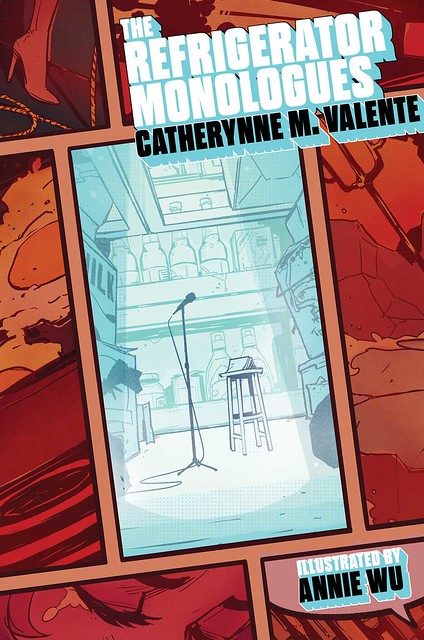 Catherynne M. Valente is one of the most interesting writers in speculative fiction today, not in the least because when she gets worked up about something, she doesn’t just yell about it — she creates art about it. This explains her latest, The Refrigerator Monologues, and now Cat is here to explain it to you.

Well…I’ll be honest, I’m still doing several of those things. But now with LOTS more punching and swearing and yelling!

My latest book is called The Refrigerator Monologues and you can see its big red and blue mug right up there. It’s more or less The Vagina Monologues for superheroes’ girlfriends. If you’re familiar with the phrase “girls in refrigerators,”coined by the amazing Gail Simone in the mid 90s, that elevator pitch/title will make instant sense. If not, come with me on a journey through time, space, and feminist theory: named for the fate of one of Green Lantern’s poor girlfriends who ended her run dismembered and stuffed into an actual refrigerator, it refers to a long-term trend in superhero comics in which women (not just girlfriends and wives, female heroes, too) are variously murdered, raped, mutilated, driven crazy, had their powers, both super and otherwise, taken away, and other sundry completely horrific ways to spend a Saturday night, not because those things featured heavily in their own stories, but simply to further the male hero’s narrative, give him something to shake his fist at the villain about, eventually avenge, or grit his teeth over.

I wanted to write about these women, give them the microphone, re-center the superhero tale on the characters that are so often used up and tossed aside by it, and give them a chance to get in some primal scream therapy. It all takes place in Deadtown, an underworld where it’s always autumn, always dusk, you can only eat extinct plants and animals and read remaindered books and listen to the house band of late, great rockers and hope someone up in the world of the living decides to bring you back with a revivification ray so you can see the end of your own story. And in Deadtown, the refrigerated girls get together every night to get mad, get drunk, and get their own back.

SOUNDS LIKE A ROLLICKING ROMP THROUGH UPLIFTING AND HILARIOUS ADVENTURES, RIGHT?

Except it kind of is. The Refrigerator Monologues is quite possibly the funniest thing I’ve written, and it’s not even all gallows humor! It’s a very new voice for me—a lot less of that elegant stuff I’m known for, and a lot more raw, stripped-down, punch-to-the-gut, straight-forward truth-bombs. And f-bombs. And actual bombs. This is a story with a lot of heroes and villains and battles and blown-up cities and blown-up people, after all.

Which leads to the catch. Because of course, I don’t have, and will never be given, the rights to Gwen Stacy and Karen Page and Alexandra DeWitt and all the others, all those refrigerated girls of the long four-color history of the world. When I first had the idea for this book, borne of white-hot blinding rage at Gwen Stacy’s final words in the last Amazing Spiderman movie having “Nobody makes my decisions for me, nobody! This is my choice!” before flouncing off to get her neck promptly snapped by the entire concept of having an ounce of agency, this presented a problem. For about five minutes.

Because the truth is, I’ve been doing this kind of thing for years. I just usually do it with Snow White and Gretel and Rapunzel and Marya Morevna and Red Riding Hood. I know how to dance this dance. I know how to strip an archetype down for parts and build up something strange and new. And I am also a glutton for punishment who has put off buying a lawnmower for literally a decade because it’s too much effort but thinks nothing of uttering the phrase “Oh, I’ll just create a complete, analogous, Marvel/DC crossover-style, cohesive, referential yet original superhero universe. For a novella. It’s fine. By the way, these mai tais are amazing where is the waiter?”

Which is what I did. I’m not being coy about anything—if you know your superhero comics, you’ll be able to name my tune in six notes. If you don’t, it might just seem like a familiar little earworm you can groove to on its own merits. It’s not even about avoiding copyright. I wanted to do it this way. I wanted to fashion this universe out of the starstuff our culture has become so obsessed with over the last 15 or 20 years. These women aren’t meant to be X-Men with the VIN numbers filed off. They’re meant to be their own complicated, gnarly, beautiful, angry people with the kind of familiarity and resonance all archetypes have. I wanted to do what I’ve done with folklore and fairy tales my whole career, only this time, I never reached for Grimm. I examined each of the stories that pissed me off the most, drew out what I felt were the core, defining, archetypical elements of each character, threw the rest away, and banged up a brand new cast of thousands, with new adventures, new twists on the old tales, new costumes, new powers, new obsessions, new endings. Think of it as a chop shop for mythology—hot new body, same classic engine.

Because superhero stories have become for us what fairy tales were for the pre-industrial world. They’re morality plays we encourage children to devour by the fistful—but they’re not really for children. They’re so much darker and stranger and sexier and more political than almost anything else we’d give to a child. Comics and fairy tales are short, but put together create a long tradition with some continuity issues. They light up the brain with epic battles and romances and bright costumes and magic while communicating the truth about the universe as told by the dominant culture. They’re focused on heroes going out into the wild and struggling against the unknown for the sake of the village. It’s just that now the unknown is the fringes of science, while then it was what to do if you meet someone in the forest who doesn’t live like you do. Though maybe it’s still that too, a little. There’s not so much difference, in the end, between “happily ever after” and “Truth, Justice, and the American Way.” There’s not so much difference between writing Snow White set in the old west and writing that awful refrigerator waiting at the end of too many stories like a spindle in a tower.

I’m terribly proud of The Refrigerator Monologues in an entirely uncool way—you’re not supposed to like your own books this much, I know. But I spent a long time living with my girls, and I love them all so much. I hope you love them a little, too. In some ways, I suppose you could think of this as my Pulp Fiction—violent, funny, weird, loud stories that seem unconnected at first but are totally entangled, jam packed with pop culture references, homages, pastiches, and mysterious unexplained lights. Only mine come from doomsday devices and mutant powers.

And old refrigerators left open just a little too wide in a big, dark room.

But not so ashamed that I won’t share it. And so timely: 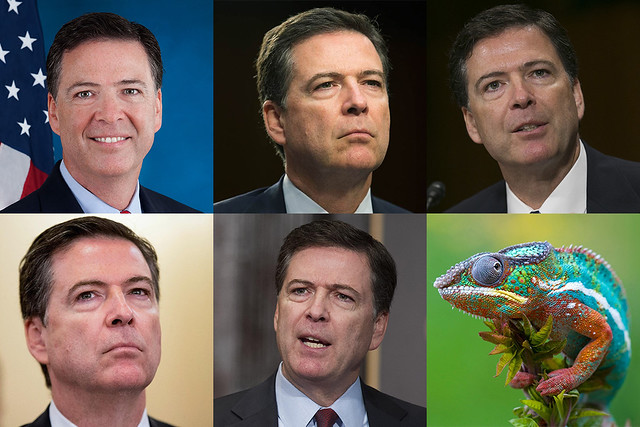