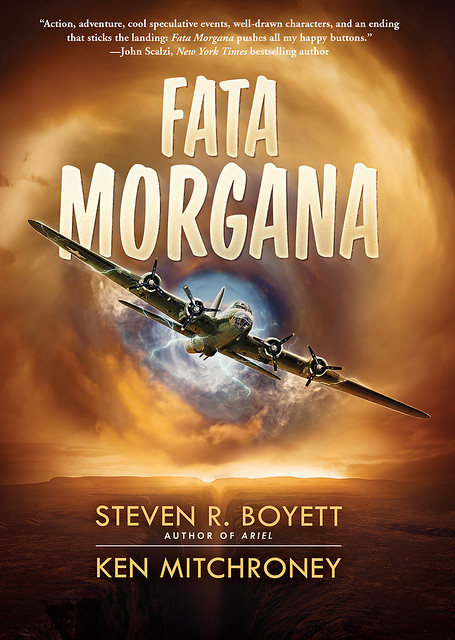 A World War II bomber gets sucked through time and space — and that’s the easy part of Fata Morgana. What was the harder part? As Steven R. Boyett explains, it’s everything else that he and co-writer Ken Mitchroney had to build up around that initial big idea.

(Disclosure: As you can see from the image, I blurbed this book.)

When one creative person and another creative person love each other very very much, sometimes they get together and make a Special Thing that’s a combination of both of them, but that’s also its own unique thing.

It’s an educational and wonderful thing to write a novel with someone you’ve been friends with for a very long time, especially when you are two very different people, with very different sensibilities, collaborating on a book whose core idea is essentially a fusion of those two sensibilities.

Our novel Fata Morgana is basically a mashup. It’s an intensively researched WWII historical novel about a B-17 Flying Fortress crew on a harrowing mission over Germany in 1943. It’s also a post-apocalyptic fish-out-of-water story, in the tradition of A Connecticut Yankee in King Arthur’s Court or The Time Machine. That fusion of sensibilities caused our agent to market it as “Band of Brothers meets Lost Horizon” — a bit marketspeak, but totally fair.

He’s also weirdly steeped in Forties American culture: swing music, movies, slang, fashion, cars – and B-17 bombers. Ken is an Old Soul. You talk to him and you realize he’s been around before. He’s the single funniest guy I’ve ever met.

I write fiction. I’ve published books almost literally since I was a kid. I’m a lifelong martial artist. I once made a living as a paper marbler. Through a fairly strange series of events, learning overtone singing led me to playing the didgeridoo, to recording electronic music, to being a club DJ with two very popular music podcasts (Podrunner and Groovelectric). As a DJ I’m enamored of the mashup, and as a writer I’m enamored of the idea of putting music into words. Music has had a huge influence on my writing – the rhythm of the prose, the symphonic structure of a larger work, sometimes the subject matter itself. My fiction is often steeped in postapocalyptic imagery, what Salvador Dalí and Tears for Fears called “the beauty of decay.” Road trips are a big theme with me. Imagine Jack Kerouac writing The Lord of the Rings.

(Oh, God. Now I really want to write that. So in the Shire when the sun goes down and I sit by the Water watching the long skies over Middle Earth, and that road going ever on and on, and in Gondor I know by now the children must be crying just before the night that blesses Mirkwood cups the Misty Mountains and nobody, nobody knows what’s going to happen besides the forlorn rags of Gandalf growing old, I think of Frodo Baggins, I even think of old Bilbo who in some way was the father of us all, but I think of Frodo Baggins.)

Unlike Ken, I am not an Old Soul. I’m a new soul. This is clearly my first time around; I’m still in my shrinkwrap. I have a naive idealist’s outrage at the ways that people and societies can behave toward one another, as if it’s a surprise every time.

So: Old friends. A witch’s caldron of sensibilities, talents, interests. Apply heat and stir. Does it blend, gel, combust? (The truth is, if you saw Toy Story 2, you probably already know what we’re like when we work together. Ken was Senior Story Artist on that movie, and I wrote the second draft of the screenplay. And at this point I won’t exactly be burning any bridges when I opine that most of what’s good about that movie is me and Ken.)

Ken had this mental image of two warring, Braveheart-ish factions about to collide when something stops them. A roaring from the sky. A B-17 bomber smoking in on failing Wright Cyclone engines, crashlanding out of frame. He’d encapsulated our different sensibilities in one image — I was so in.

The next four years came from that single image.

I’m a firm believer in a fantasy or SF novel’s feet being planted on real ground, and I did a ton of research on bombers (including buzzing my neighborhood in one, woo hoo!), the US wartime economy, the European theater, the Biosphere 2 experiment in Arizona, and self-sustaining ecologies in general). Ken loves ensemble movies & shows, from Jack Benny to Frazier, and put our bomber crew together. We logicked the living crap out of the storyline. It has a ton of twists and surprises, and judging from the responses so far, they seem to have worked. It has sections written in bullet time and dialogue you’d expect to hear on a Philco Cathedral radio.

The surprising thing was how seriously we began to take the whole endeavor. We’d started out wanting a rollercoaster ride, a summer tentpole movie. But in the wake of Band of Brothers and Saving Private Ryan it seems a disservice now to look back on that war as an excuse to tell a Ripping Adventure Story. What those frighteningly young men went through was simply unbelievable, and the more we learned and the more the book took shape, the more we felt the awful weight of duty thrust upon an entire generation. Such that the book became about the price of duty over desire.

I think no matter what you write about it’s good to take your subject matter seriously. I think it makes you go the extra mile, do your due diligence to your characters and your world. It was just as true for the post-apocalyptic aspects of the novel: They went from plot device to holy crap, this is what it’d be like to live like this.

I jokingly describe Fata Morgana as a novel about a WWII bomber crew who fly into another novel. But we didn’t treat it as a joke at all.

And when all is said and done we have before this creature that combines our creative DNA to become its own unique self. Ken and I have done our best to comb its hair and make it overall presentable, and now we’ve sent it out into the world all on its own. We hope you’ll find it a valuable member of the good society it has entered, and that it does us proud. They grow so quickly, you know.