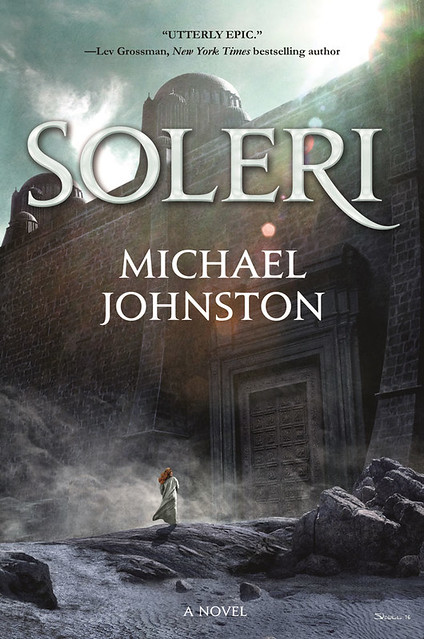 What does it take for a civilization to be “too big to fail” — and can any civilization in fact make it to that particular point? In writing his novel Soleri, author Michael Johnston had reason to consider this particular question, and came to a civilization near the Nile River for inspiration.

I got my big idea for my novel, Soleri, back when I was an undergraduate, sitting in an art history class. The professor was talking about ancient Egypt and how the people of the New Kingdom visited the pyramids, which were constructed during the Old Kingdom (thousands of years earlier) as tourists. Those giant pyramids in the sand carried as much mystery and wonder for the Egyptians of 10 BCE as they do for any tourist today.

Egyptian society was ancient in a way that we can’t even imagine. For roughly three thousand years they built a civilization in and around the Nile river. Academics theorize that the Egyptians could not imagine the possibility of their civilization ever coming to an end. The Persians had come and gone and when the Greeks appeared, they simply integrated themselves into the fabric of Egypt. Cleopatra was of Greek origin. There was something potent about Egypt. It simply could not be dominated. Of course Julius Caesar put an end to that notion, but it had a good run. Three thousand years is nothing to sneeze at! So I think it’s worth standing back and considering the idea of a civilization that had always existed and believes that it always will. That idea stuck with me.

In fact, it stuck with me for fifteen years. I grew up in rural Ohio and was a constant reader of science fiction and history, and I loved architecture as well. I never thought I could be an author, so I went with the practical choice and studied architecture. I’ve taught architecture and practiced in New York and Los Angeles. I did a lot things between that art history lecture and the time when I started writing speculative fiction.

But I wouldn’t call it a break. Soleri is as much about history as it is about architecture (although I did have to tone down the descriptions of ancient buildings. They went on for pages in the early drafts). See, my big idea was to take what I knew about architecture and history and to meld it with everything I loved about speculative fiction. To do that, I went back to that idea about ancient Egypt. Suddenly that old idea had a fresh meaning, I saw it as the bridge between my old profession and my new one.

Skeptical? Hold on for a moment. Here’s how it worked.

I wanted to write about architecture and history, but I didn’t want to write non-fiction. I wanted to use my imagination and besides, there are already many wonderful histories of Egypt and Rome on the shelves. So I decided to look at ancient Egypt as a concept, a speculation, and not a place in history. Egypt represented the eternal civilization. Even the Roman Empire was short by comparison. So I decided to write about a civilization that was so ancient, that every part of its history had been obscured by time, that its origin had been written and rewritten so many times that the truth behind it had been lost a hundred times over.

My novel is about a civilization ruled by a family of gods, but no one has seen these gods, the Soleri, in centuries. They are shrouded like their history–the wall they live behind is even called the Shroud Wall. In Soleri, the empire is so old that its people have stopped questioning its legitimacy. Everything is ritual, but no one recalls the purpose behind these rituals. The empire of the Soleri is still going through the motions, pretending it is virulent and strong when all the life has already poured out of it (if you are starting to think the Soleri empire might be a metaphor for our own, you are on the right track but that’s a different essay).

There is a place in the novel when one of my characters thinks: This city (the Soleri capital) has forgotten more history than I can recall. It has witnessed the lives of more men, great and small, than I could ever hold in my head.

That lines sums up a lot of the book. Everything we first learn about the Soleri and their empire is inverted as the novel progresses. Like peeling away the skin of an onion, we have to strip away all the layers of history, all the lies that were placed one on top of the other to form the empire we encounter in the prologue. One of the lines in that piece sums up the idea perfectly, Before time was the Soleri, and after time the Soleri will be. They are eternal, their existence unquestionable, or so the story goes.

In Soleri, we learn the secrets behind each of those lies. We take apart the history and find something entirely unexpected inside, which takes me back to my big idea. The eternal civilization. It doesn’t exist. It is itself a fiction. Soleri is about a society that has become its own fiction, a civilization that has come to believe their own lies. At least until a few people start to find out the truth behind the empire. That’s what happens in the novel. That’s the moment when things get interesting, but I’ll leave it to the reader to discover what actually hides behind the Shroud Wall and what secrets lie behind the history of the Soleri.