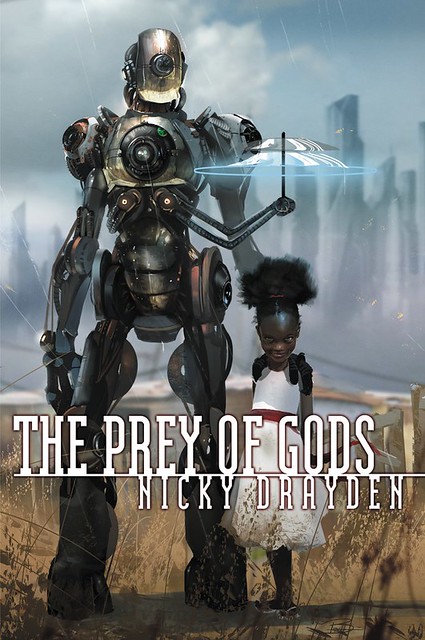 Coincidence: Random events that merely give the appearance of being connected, or… something more? Not so coincidentially, Nicky Drayden is thinking about coincidence, and how it plays into her debut novel The Prey of Gods. What are the odds that she will tell you about it here? Pretty good!

Have you ever been out running errands about town, start thinking about a friend, only to look up and see them standing right in front of you? Is it coincidence, or is there something greater at play? Fate? A master weaver, tangling and entwining our lives together? Maybe there’s someone who’s watching me from above, saying “Hey, Nicky’s been laying on the couch watching Netflix Originals for six hours straight. Clearly, she needs a few threads crossed…”

I often feel like a pawn in my own life. When I was a kid, my parents took me and my brother to the Houston Zoo. We both got silver helium balloons, and my little brother let go of his and cried as it floated away. Later that day, back at home (exactly 26 miles away, I just checked) we’re playing outside in a neighbor’s yard, and I look up and see a balloon floating high over our house. I am not lying when I say that balloon came directly down towards me, right to where I was standing, and all I had to do was reach up and grab it. A silver Mylar balloon with “Houston Zoo” written on it in colorful block lettering. Of course, I kept it rather than giving it back to my brother, since I was kind of a jerky big sis, but still. It happened.

Coincidence? Fate? Maybe it wasn’t even the same balloon, but does that make it less weird, or weirder? This kind of thing happens to me practically every other week, but unfortunately, writing fiction, you can’t rely on coincidence too many times before a reader throws your book across the room. After all, real life doesn’t have to make sense. Fiction kinda does.

So enter the master weaver—me, your mostly humble debut author–here to regale you with my Big Idea, the story behind the threads that make up the tapestry that is The Prey of Gods. When I set about writing this novel, all I had were six random character sketches, most of whom have nothing to do with one another, and a setting, South Africa, because during a college summer break I’d traveled there as a peer counselor for a group of teenagers, and I thought it’d be cool to see how the experiences I had there would translate into a work of speculative fiction set 50 years into the future.

There are of course, the big, bold threads that tie the six point-of-view characters together, moving them all towards the epic battle scenes involving giant robots and angry demigoddesses. (Fun fact, easiest way to upset a demigoddess, have someone show up to the world’s destruction in the same exact dress she’s wearing.) But the true joy of character weaving is tying the tiny, nearly microscopic threads together, and having the characters cross paths in ways they might not even notice.

For example, Riya Natrajan, the sultry pop diva in the book, has attitude for days, and finds herself stuck sharing a robot taxi with a business exec who’s late to a meeting. She’s trying to be incognito, but the guy is onto her—suspecting she’s a celebrity lookalike, but maybe…just maybe it’s really her. Riya denies it of course, but now the guy is jabbering on, practically beside himself with excitement. She commands the robot taxi to play some music for a distraction, and as the master weaver would have it, one of the tracks from her latest album blasts over the speakers.

Small coincidences like this work fine, and even add a little comic relief to tense situations, because the plot isn’t hinging on such minor occurrences. But then the guy tells Riya that he’d just bought tickets to her concert for his brother-in-law, and the careful reader will realize that he’s related to Muzi, the slightly wayward teen, who after a trippy afternoon dabbling with a new hallucinogenic drug, discovers he’s able to control people’s minds. Muzi inadvertently (maybe) uses his new powers to make his best friend Elkin forget the most intimate moment of both their lives. Oh, and Elkin’s drug dealing cousin, the one who bullied them into this whole mess, is in a secret relationship with pop star super sensation Riya Natrajan. Bigger coincidences, threads are crossing, and the weaving is just getting started.

These little knots gain significance as the story moves on, putting more and more tension upon already taut threads. Do the threads pop, or do they hold? Are these chance encounters unrealistic? That’s ultimately up to the reader to decide, but maybe we enjoy these twists of fate in fiction so much because they give us a mechanism to process the absurd coincidences in our own lives.

I owe a lot of people credit for the development of this book, but first and foremost, there is Dr. Joshua Hill to thank, the director of the Renewable Energy and Environmental Protection program who organized and lead our trip to South Africa. Many (many) summers ago, I left my college home of Austin, Texas, leaving my country for the first time as well. I worked nearly all of my amazing experiences I had abroad into the novel, like the mouthwatering beer bread, the intricately carved wood sculptures, and of course the plague of dik-diks.

While in South Africa, I received a letter from my college boyfriend, informing me that he’d had lunch with a random guy up at his summer internship in Virginia, who knew someone who went to the University of Texas (a school of 50,000 students, mind you.) The guy asked my boyfriend if he knew a girl named Nicky. My boyfriend said that he was dating a girl named Nicky, and from a short exchange, they concluded that I was in fact that same Nicky. A coincidence in itself, but the guy who my boyfriend was having lunch with—Dr. Joshua Hill’s son.

Master Weaver, I see you up there. You’re doing a bang-up job. Keep those threads crossing.