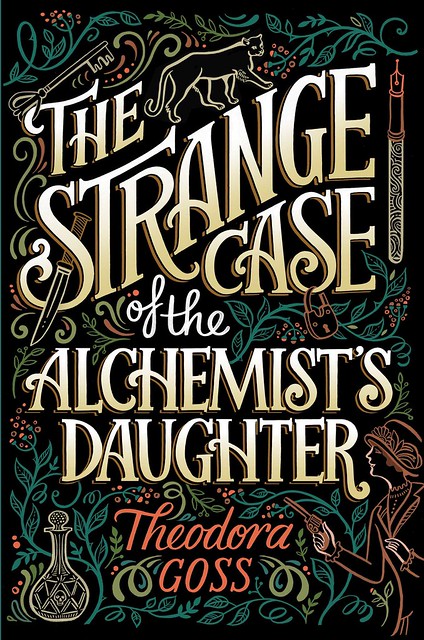 In her Big Idea piece for The Strange Case of the Alchemist’s Daughter, author Theodora Goss makes an observation about classic monster stories that I, personally, never picked up on, but now that she’s pointed it out, seems obvious. It says something about me that I missed it, and something about her that she’s used it as a cornerstone for her novel.

“The remains of the half-finished creature, whom I had destroyed, lay scattered on the floor, and I almost felt as if I had mangled the living flesh of a human being.” –Victor Frankenstein

It’s hard to identify where a novel comes from, but if The Strange Case of the Alchemist’s Daughter comes from anyplace specifically, it’s that moment when Frankenstein, having created a female counterpart for his creature, disassembles her. Then, not wanting to leave her remains for the peasants to find, he puts them in a basket, weighs it down with stones, and throws it into the sea. There goes the Bride of Frankenstein…

I was studying Frankenstein and his creature because I was writing a doctoral dissertation on late Victorian gothic monsters–Dr. Jekyll and Mr. Hyde, Count Dracula, the Beast Men on the Island of Dr. Moreau. Mary Shelley’s Frankenstein isn’t late Victorian, of course, but I wanted to understand this iconic monster narrative so I could apply some of what I learned to those later works. Well, one thing I learned is that there’s almost always a female monster, and she’s almost always destroyed.

Let’s take some examples from the later works I was studying. Some of these you’ll recognized, but some may be obscure enough that you won’t know what I’m talking about. That’s all right! Late Victorian gothic is like a wonderfully fearsome labyrinth. The fun is in exploring . . . So let’s start with Sheridan Le Fanu’s Camilla, in which the titular vampire is destroyed according to standard vampire protocols for the crime of seducing the innocent Laura and trying to turn her into a vampire as well. (Bonus: lots of sexual subtext from an era when books about same-sex romantic relationships were still banned.)

In Bram Stoker’s Dracula, which was deeply influenced by Carmilla, both vampire Lucy and Dracula’s brides are staked and beheaded. In H.G. Wells’s The Island of Dr. Moreau, the Puma Woman escapes from Moreau’s terrible House of Pain and kills him, but is herself shot. In Arthur Machen’s The Great God Pan, the mysterious Helen, who has the power to summon Pan and his minions, is forced to hang herself. You don’t even have to be a technical monster: in H. Rider Haggard’s She, the irresistibly beautiful Ayesha burns in the fire of immortality–which is a good thing, because she was thinking of claiming the British throne. And where would that leave Queen Victoria, I ask you? Ayesha isn’t a monster, but she is monstrous–a woman who has the power to kill with a gesture, and whom no man can resist. No wonder the novel has to get rid of her.

We find the same thing earlier in the century and across the pond with Nathaniel Hawthorne’s “Rappaccini’s Daughter,” the beautiful but poisonous Beatrice, who kills herself so that her lover may live. Beatrice gets more sympathetic treatment than other monstrous women–she is, at least, a romantic heroine. Like Ayesha, she gets to tell part of her own story, although the focus of the narrative is not, finally, on her, despite Hawthorne’s title. But she too dies in the end. They all do. One exception is Queen Tera in Stoker’s less-known novel The Jewel of Seven Stars, where the resurrected Egyptian queen triumphs at the end–but guess what? In the second edition, the ending was rewritten (perhaps by Stoker, perhaps by his editor), and she too is exterminated.

(Perhaps most strangely, women creep into these works even when not officially present . . . In Robert Louis Stevenson’s The Strange Case of Dr. Jekyll and Mr. Hyde, which contains almost no women at all, Hyde himself is feminized, suffering from “hysteria,” and Jekyll tells us that he finds turning into his alter ego “unmanning.” Of course, Hyde has to die, taking Jekyll with him.)

The field of monster literature is strewn with female bodies. Why? Well, monsters die just in general, so it’s not all about being female. But female monsters are presented as particularly dangerous. Frankenstein does not complete his creation because she might breed with the male monster, and their progeny might outcompete man. Beyond that concrete biological danger, a female monster does not fit the cultural category “female” as it was conceived in the nineteenth century (or earlier: we have a fearsome female monster who must be destroyed in the classical figure of Medusa). Carmilla must be destroyed specifically because she threatens the good women. She might–gasp–turn them into monsters like herself!

So the big idea behind my novel is really very simple: the female monsters did not die. They’re alive, and they’re telling their own stories. That doesn’t mean all the female characters in the novel are good–villainesses are too delicious to dispense with, and anyway, I wanted to make sure that in my narrative, female characters got to be all sorts of things, both good and evil.

But it started with the idea that female monsters have served, throughout literary history, as supporting characters for primarily male stories. They have been the sirens or harpies at the edge of the hero’s journey, the sphinx posing riddles . . . The late nineteenth century was particularly obsessed with monstrous women, as we can see from the many pre-Raphaelite and Aesthetic paintings of these mythical figures. (It’s probably not a coincidence that this was also the era of the New Woman and the suffrage movement, when “unnatural” females were agitating for such shocking things as the right to vote or attend university.)

In my novel, the women talk–a lot, sometimes over each other. But hey, they’ve been silent (and silenced) for so long that once I let them start, they had an awful lot to say. They tell us their stories as they really happened. (Jekyll had a daughter! The Puma Woman survived! Frankenstein’s female creature was not disassembled after all!) I wrote The Strange Case of the Alchemist’s Daughter because I love the older novels–I can’t imagine a better afternoon than one spent with nineteenth-century monsters, with tea and cookies on a nearby table, while outside the mist and rain create a suitably gothic atmosphere. But this time, I wanted the women to have their say . . .