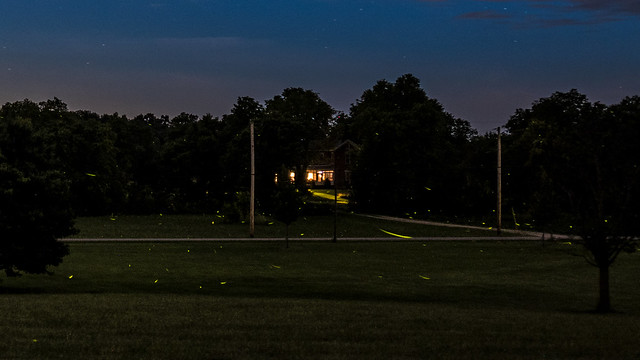 I’m getting a smidgen better at taking pictures of these little glowy dudes. The secret, which is not a secret at all, is long exposures on steady platforms, and low ISO settings so you don’t blow out the picture. This one, which is actually a detail of a larger photo, is a 20 second exposure at ISO 250 at late dusk (close to 10 pm here because it was literally the night before the solstice), so the sky was darker than it is here. I used the birdbath in the front yard as a platform.

I was focused on the fireflies but as you can see a little here, and rather better in the photo linked above, I caught some stars in there too, as well as twenty seconds of their movement across the sky, which was apparently just long enough to catch some streaking. I think this is pretty cool.

I’ll probably post one or two more firefly photos before the season is done. I think they’re pretty.