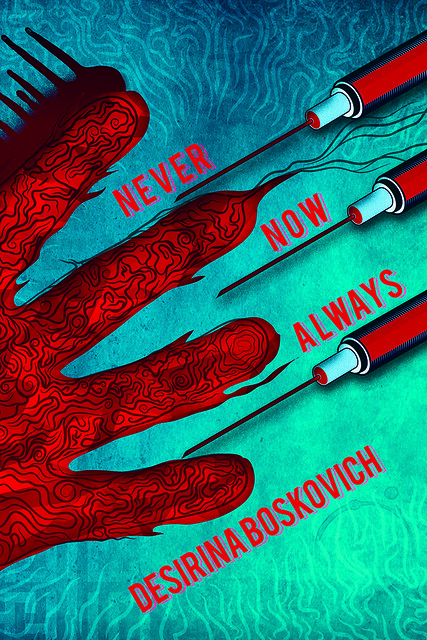 Memory and language: Two concepts that Desirinia Boskovich had in mind for her novella Never Now Always. And now, here she is, to remember to you, in words, why they were important to her story.

There are key moments and motifs in fiction that we latch onto as readers, and as writers. Symbolic scenes that loom large for us because they connect in some deeper way with our own buried nightmares and past traumas.

For me one of those moments is in C.S. Lewis’ The Silver Chair, where every single day, bound to that chair, the prince remembers how much he’s forgotten. Fleetingly, he understands he’s a prisoner and also that he can do nothing about it, imprisoned equally by his own enchanted brain.

I was just six or seven when I read this and the horror of it simply overwhelmed me and then infiltrated me: that moment when you know, and simultaneously know the knowledge won’t last.

I think it terrifies me because the vulnerability and powerlessness of that moment is so crushing and absolute.

In Never Now Always, I set out to explore the terror of that moment. And also to face it and conquer it, putting my characters in the same predicament, yet giving them tools to fight.

So the story centers on Lolo, a child who finds herself trapped in a mysterious labyrinth under the supervision of a horde of voiceless alien Caretakers. She is surrounded by many other children, but none of them know how they ended up there, or what happened before. And as the Caretakers subject the children to psychological experiments focused on trauma and memory, their ability to form short-term memories is limited, too. Everything they learn, or think they learn, just slips between their fingers like water.

Then Lolo hits on the concept of writing — scrawling drawings and pictographs as simply as possible, designed to represent these fleeting pieces of story to her future self. Hoping that she stays the same, that her perception persists enough from day to day that when she sees those scribblings later, she’ll still know what they mean.

For me, as the writer of the novella, it was more complicated. The deeper I got into the story, the more I realized how truly challenging it would be to tell a story where the mechanics of narrative are broken, where one thing doesn’t always lead to another and pieces of story don’t necessarily add up.

In some ways every scene felt like a first scene. There are gaps in this story, and continuity errors.

But I also realized that while I wanted my reader to feel somewhat disoriented, I could not let them remain as disoriented as the characters, because that would really not be an enjoyable story to read.

So I also ended up depending heavily on language to do the work — I tried to anchor everything in touch and taste and feelings, always in the present tense, a language reinvented for children whose sense of time is confined to a narrow slice of perpetual now. Everything that’s happening to them is happening in the immediate, and the present is the only moment that matters.

And in that perpetual now is where I think my characters — and I, myself — find redemption and solace. Because love is deeper than language. Because my dog doesn’t need to remember all the days of his life with me to know that with me he’s loved and safe and home; “yesterday” and “tomorrow” don’t actually mean anything. As always, my dog is wiser than I am. So I gave Lolo a dog, too, to help her figure it out.

In the end, the story returns to the one idea I find most comforting: that in this world and the next, life after life, we always make our way back to protect those who’ve protected us, and to be reunited with the souls we’ve loved.