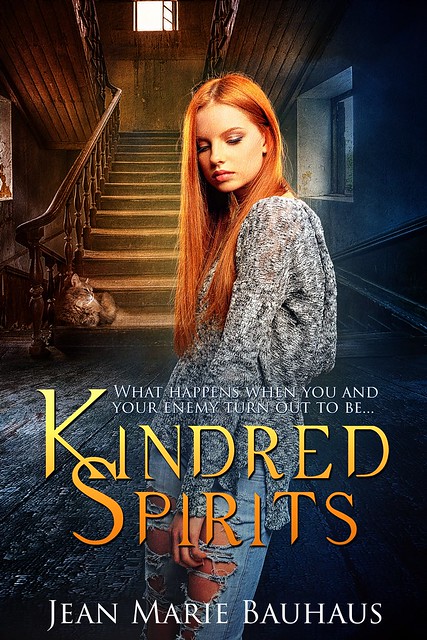 First books in a series are often easy to write — fresh ideas, new characters, cool situations. What about the second books, where you have to continue with the rules you already set out? How do you keep it fresh for the readers, and the author? It’s a question Jean Marie Bauhaus confronts in her new novel, Kindred Spirits.

Sometimes ideas come easy. For example, walking out of a movie theater many moons ago after having seen The Grudge, I had the thought that if being violently murdered can turn someone into a murderous vengeful spirit, then what about the spirits of the people murdered by said vengeful spirit? Wouldn’t they want vengeance, too? What if instead of taking their anger out on innocent people they instead turned on the ghost that killed them in the first place? That idea stuck with me and eventually grew into the plot of my debut novel, Restless Spirits.

When it came to writing a sequel, however, nothing was so easy or clear cut. Kindred Spirits actually took me years to write because although there were a few things I knew for certain, none of those things added up to a story. I knew, for instance, that the spotlight would shift from the first book’s ghostly protagonist to her living sister, medium Chris Wilson. I knew that Chris would purchase and move into the haunted house featured in the first book, where her sister’s spirit still resides. And I knew that living with her overprotective big sister’s ghost would prove to be complicated, and also pretty annoying.

I also knew that I wanted the second book to stand on its own two legs, to be a self-contained story that could be understood and enjoyed without needing to have read its predecessor. This seemed like a tall order.

Despite knowing these details, a story didn’t start to take shape until I conceived of an antagonist who not only didn’t believe in Chris’s abilities but also had the power to seriously complicate her life. That character became Derek Brandt, a cynical TV crime reporter who believes he has a duty to expose Chris as a fraud. Which leads to the question: what would Big Sis do to someone who went after Chris in such a way?

The answer: haunt him, of course. At which point hijinks would ensue.

But that still wasn’t a story. It was only a starting point. Things didn’t really start to come together until I sat myself down and asked myself, what is the central idea of this story?

Restless Spirits developed along the theme that love is a powerful force that gives good people the strength to do what’s necessary to overcome evil, so powerful that it outlasts even death.

It occurred to me that here I had an opportunity to explore the flip side of that idea–that love can be twisted into a destructive force by twisted, broken people, used as both an impetus and an excuse for evil actions. With that central idea in place, other characters quickly came into being and their motivations and goals became clear. Derek Brandt, as it turned out, had good reason for his cynicism and distrust of Chris Wilson and her ilk. He also had a brother, whose unsolved murder became the central plot.

Finally, I had a story to tell.

That story turned out to be quite the mashup. One part ghost story, one part romantic comedy and one part murder mystery with a dash of thriller, served with a liberal sprinkling of a Gilmore Girls-esque relationship between sisters who won’t even let death come between them.

The romance and comedy came naturally, as did the darker supernatural and suspense aspects of the book. As someone who grew up bouncing back and forth between the likes of Lucy Maude Montgomery and Stephen King, I tend to have a wide range of sensibilities that creeps into my writing.

The mystery part, however, challenged me and took me places that as a writer I never expected to go. It turns out that writing a mystery doesn’t simply involve deciding who the killer is and then planting clues for your protagonist to follow like bread crumbs. You also have to do so in such a way that doesn’t make the killer’s identity completely obvious to the reader–which is harder to do than it sounds. Giving the killer layers, with sympathetic motives that make him or her seem like a human being and not a Disney villain, was also a concern.

I think I managed to pull it off, but that’s up to the reader to decide. At any rate, whereas the first book is a love story at its core, so too is this one, but it’s as much a story about how love can become corrupted as it is about its power to heal wounds, overcome darkness and make forgiveness possible. Whether it does one or the other ultimately comes down to the condition of the soul who’s driven by it.