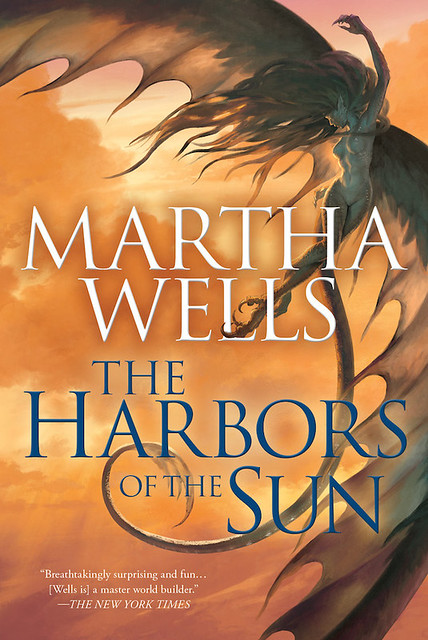 All good things come to an end, and for The Harbors of the Sun, the last book in Martha Wells’ Raksura series, the author takes a look at how she got here, and what the series, and the journey of writing it, has meant to her.

After four novels, and two novella collections, The Harbors of the Sun is the last book in the Books of the Raksura series.

It’s fitting that The Harbors of the Sun is about the end of a journey, because it’s been a long road to its publication. The first book in the series, The Cloud Roads, came out in 2011, after taking two years to find a publisher. It was the book of my heart, a book that in many ways I had always wanted to write.

But at first, nobody seemed to want to publish a book with no humans in it, where the main characters were matriarchal bisexual polyamorous flying shapeshifting lizard-lion-bee people. Go figure!

I always felt that despite having non-human protagonists, the themes of the series were universal. Like finding a family and a home and protecting it against outside attack and environmental pressure. Learning to trust when suspicion, paranoia, and pretending to be anything other than what you are have been your main survival traits. Learning to fit into a complex society and web of relationships that seem almost impossible to understand. How hard it is to leave your past behind. Plus there’s a lot of adventures and exploration and flying and people-eating monsters; who wouldn’t want to read about that?

I put a lot of my own feelings of isolation into the story. I’d been a weird, lonely kid who grew up as an SF/F fan at a time when nobody else I knew liked or cared about it. I also wanted to capture that sense of wonder and possibility, of strange worlds with no boundaries, that I felt while looking at old books with pulp covers in the SF/F corner of the public library. (The corner that I was too young to look at yet but it was their own fault for putting the children’s section next to it.) After years of trying, I felt like I had captured that feeling with the Raksura.

Then finally, despite everything stacked against it, The Cloud Roads was published, and then The Serpent Sea, The Siren Depths, and the two novella collections. And even though I had gotten the Indigo Cloud Court settled in the Reaches and (mostly) happy, I still wanted to explore more of the Three Worlds with these characters. I wanted Moon and Jade and the others to go on an adventure outside the relative safety of the colony trees, and to explore the conflict between the Raksura and the predatory Fell.

In many ways, the Raksura didn’t know very much about their world. I wanted to take the characters and the reader on a journey to find out more. I wanted to push the boundaries as far as I could. And that idea became The Edge of Worlds and The Harbors of the Sun.

So, it’s been a long journey to get to The Harbors of the Sun, the end of the story of Moon, Jade, and the Indigo Cloud Court. This is the most I’ve ever written in one world, and it’s bittersweet to say goodbye to these characters. These are still the books of my heart, and the books I always wanted to write, ever since I was that little kid in the public library.