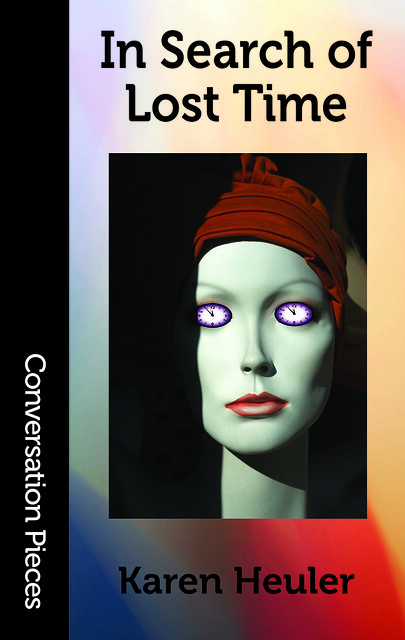 Got time for a Big Idea? Karen Heuler’s involves time itself — that having and getting of it, and what both mean for her latest work, In Search of Lost Time.

Who wants to lose time? Who has enough time?

There’s a line from Andrew Marvell’s poem “To His Coy Mistress” that I often think of:

But at my back I always hear

Time does indeed seem to be the quintessential Big Idea, the white noise behind all we do. Time happens without our consent, it happens without our noticing. We can do things in the fullness of time, or we can run out of time, or we can allocate time, but there’s never enough. Time is, in fact, our alternate reality. Had we used our time differently, we would have been different.  But there’s only so much time and there’s only so much we can do with it.

In my latest book, In Search of Lost Time, my main character has the ability to steal time, and possibly also the resources to get it to the people who need those minutes the most—the dying, for instance. To complicate matters, some people know she can steal time. And there’s a market for it. Of course there’s a market for it—time is the most valuable commodity there is. You can go for days without food or water, but not without time.

The sticky part, of course, is that you can’t get more time this way without taking it away from someone else. She’s not a saint but she’s not a murderer either. The underground knows who she is, as do some people who are running out of their own time. Who will she help, and how does the whole thing work, anyway? She’s new to it all. But there just might be someone who knows what to do about this strange ability she has, how to figure out a strategy for the most valuable thing there is. Can she avoid getting even more involved?

But enough about her. What would you do? If the world were starving but you could grab a few grains of rice from everyone else in order to survive, would you do it? Is just a little bit of theft really theft at all? Would you share what you stole—and how? How would you choose who to save?

These questions aren’t answerable for us; they merely let us look at the decisions we do make by looking at the choices we could make. And, by the way, those grains of time or rice don’t just come to you; you have to gather them. You have to see who you’re taking them from. The Big Idea gets personal.

What would you do?

10 thoughts on “The Big Idea: In Search of Lost Time”