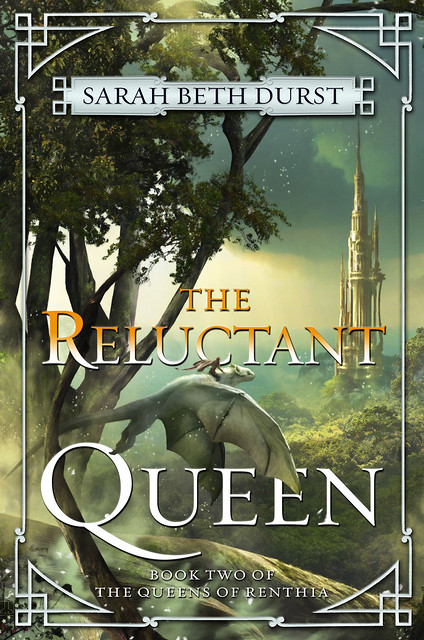 Be warned: in today’s Big Idea post for The Reluctant Queen, author Sarah Beth Durst gets a little… bloody.

This book was born in blood.

I had just arrived at a writing retreat in the Poconos.  Beautiful place.  Every writer was given an adorable wood cabin nestled beneath pine trees.  I was walking up to mine, reveling in the bird song, marveling at the wildflowers, anticipating frolicking with bunnies and deer… and I tripped and fell flat on my face.  Cut my lip.  Tasted blood.  And had the idea that become this series:

The Reluctant Queen is Book Two of The Queens of Renthia, an epic fantasy series set in a world filled with nature spirits.  But these aren’t your sweet pastoral sprites.  These spirits want to kill all humans.  And only certain women — the queens — have the power to control them.

So that was my Big Idea for the world.  I created a gorgeous land filled with towering trees (think Lothlorien or Endor-size trees, with cities nestled in the branches), mountains so tall they pierce the sky, and endless glaciers.  Thanks to the overabundance of nature spirits, it’s a beautiful utopia… except for the constant danger of imminent death.  Given my lack of survival skills, I’d probably last about five minutes before I was ripped apart and eaten.

But that’s not the only Big Idea that went into making this book.  For me, it takes two Big Ideas to birth a book, one for the world and one for the characters — the collision of those two ideas is what propels me from “huh, that’s cool” to “ooh, I want to write that!”  (Side note for any beginning writers out there: one trick that I like for coming up with ideas is to make a list of Things You Think Are Awesome, pluck two items off the list, ram them together, and off you go.)

For this book, there was an idea that I’d been toying with for some time: exploring the concept of the reluctant hero.  The reluctant hero has a rich history in fantasy literature, which makes it wonderful fodder for ripping apart and creating something new.

One of the things that I love about writing fantasy is that there’s such a wealth of history to it.  You’re writing in conversation with hundreds of years of storytelling tradition — and because of this, readers come with a ton of expectations… which means that you as a writer have the marvelously fun chance to either fulfill or subvert those expectations.  Or both!

In The Reluctant Queen, I wanted to write a book in which a character was reluctant to use her power for a very good reason — in other words, not because she’s insecure or shy or lacks an understand of the situation, but because she’s examined the facts and come to the conclusion that using her power would be profoundly stupid.

Naelin is a woodswoman from a remote village who has immense power, but if she uses it, she runs the very real risk of leaving her two small children motherless.  Or worse, causing their deaths by drawing the spirits to them.  She’d rather let the world burn than endanger her children.

At their heart, these books are about power: who has it, who wants it, what you do with it, and what it does with you. The Reluctant Queen continues the story of Daleina (whose tale began in The Queen of Blood) and introduces Naelin — two women with very different approaches to the power they wield.  Together, they are responsible for the fate of their land.

I had (and am having!) such an immensely fun time writing these books.  It’s been an immersive experience, ziplining through the trees and flying on the backs of air spirits.  I’m so very, very excited to share this world and these characters with you!

Welcome to Renthia!  Just watch out for the trees.  They bite.