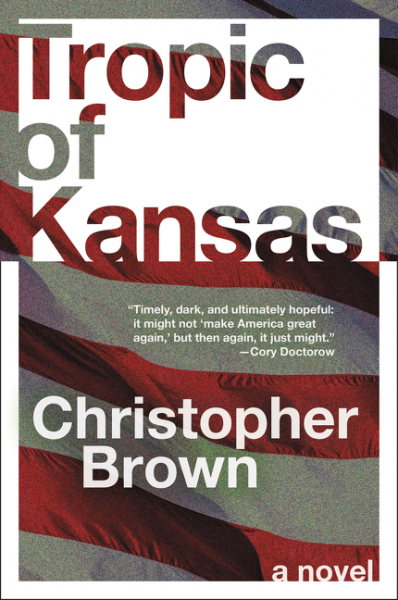 The opening sentence of Christopher Brown’s Big Idea essay for Tropic of Kansas hits awfully close to home these days. Buckle in.

What if the revolutions we watch ripping other countries apart were happening on our own streets?

America as Syria, Ukraine, Venezuela—that core conceit behind Tropic of Kansas drove almost everything else in the book.  It also taught me hard lessons about how speculative counterfactuals dictate the way you tell their story—and how your characters need to show you the path.

As I began to sketch out the book, my big idea was literally outside my door. The Austin leaders of Occupy had made the neon junkyard across the street into their secret base camp. Every day the news showed uprisings across the world, and increasingly stark political divisions at home. The distance between the peaceful protests here and the violent chaos on screen was nearer than geography would suggest.

You could see narratives of revolution lurking all over our pop culture landscape, from YA dystopias like The Hunger Games to the three movies that came out as I started the first draft about people taking over the White House. I wanted to explore that territory in a way that bit into the copper wire, in a mirror reality built from the mundane details of the observed world and charged with the motive power of the revolutionary creation myths we are taught in school. Done right, it would be the literary equivalent of a Syrian war zone smartphone video transposed to St. Louis.

I thought I had the perfect generic material to pull it off, by repurposing tropes of adventure fiction and political thrillers toward more emancipatory ends.  Rogue heroes and whistleblowers—a Fafhrd & the Gray Mouser for the age of Blackwater, a Glanton gang that rides to Washington instead of the border, a Night Manager undercover in dystopia, with old binaries busted to reflect 21st century diversity.  Those action-oriented archetypes seemed an antidote to the way characters in most post-9/11 fiction verbally defenestrated corrupt power but rarely effected real change.

I looked for the territory between the Nazi-fighting grit of 1960s adventure pulps and the grim memoranda of the Senate Torture Report. I found rich character trajectory rereading Eric Hobsbawm’s Bandits, a cross-cultural study of how thieves sometimes morph into social bandits (think Robin Hood) and then revolutionaries. I found an old button that said “Billy Jack for President” and put it on my desk. I made a note to myself on my Tumblr, a photo of three books next to each other: a Frazetta-covered Conan paperback, a post-financial crisis political manifesto, and a treatise on Anthropocene ecology. The caption: “remix your hypotheses.”

I started the remix, with gusto. And the initial result was kind of like when you are a kid and your mom or dad lets you loose in the kitchen to make your own dish, usually involving a lot of food coloring that substitutes for authentic flavor, the solution to which is more sugar. A compelling postulate does not automatically make a believable world, and a fresh archetype does not necessarily make a character anyone cares about. There’s no recipe—you need to intuit your own, using real ingredients available in the pantry of memory.  It’s not easy, and usually takes a few tries.

J.G. Ballard liked to say that the inverted worlds of his realist science fictions were drawn using the same skills he learned as an anatomy student dissecting human cadavers. I thought I understood what he meant until I tried to find my own way in. You have to take the clay of the real world and turn it inside out more than just one time. You have to see the threads that connect all the different pieces into a whole system. You have to figure out how character defines the world, is defined by it, and how the world of your story functions as a kind of meta-character. Outlines only get you so far—you have to write your way through it, and the harder it feels the closer you probably are.

The post-9/11 story I wanted to tell required a world without 9/11, in which all the dark energy of the war on terror was unleashed inside our own borders. The Sadr Cities needed to be run-down suburbs with rebels holed up in bullet-pocked strip malls. The American Spring required an America that looked a lot more like an oligarchic dictatorship than the civil society I lived in.  And the people that inhabited that world had to be found through their shimmering reflections in the liminal spaces of this one.

The oft-quoted Gibsonian aphorism about the uneven distribution of the immanent future is also true of dystopia. The parts of America turned Third World, the Yankee Gaza and DMZ, are there if you look for them. So are their inhabitants. The guy I met who lives in the abandoned building by the frontage road, the lady I know who called me about the deportation trucks rounding up her neighbors, the in-laws who told me about their college friends who got disappeared in the dirty war back home, and even the people grinding away in the corporate offices downtown could all point to the dark mirrors hiding in plain sight.

The land told the story of its own subjugation to industrial agriculture and petrochemical extraction. By finding the world of my book folded into the world around me, I was able to build a real portal to my imagined postulate. I learned how the coupling of realism and speculation can inadvertently produce worlds that seem prescient. And I learned how the injection of humanism into dystopia can help find the light that lurks on the other side of the unjust worlds we make, whether in the safe laboratory of the novel or in real life.