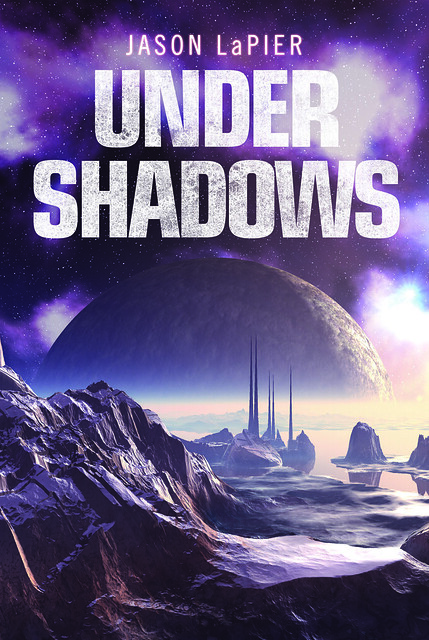 Home is where the heart is, but what does “home” mean, and does it mean the same thing for everyon. Author Jason LaPier has thoughts on this topic, and what it means for his latest novel Under Shadows, and the series of books to which it belongs.

The Dome Trilogy centers on three characters with three very different backgrounds. There’s “Jax” Jackson, who grew up in a dome on planet in the Barnard’s Star system, living a sheltered life and by his late twenties, working as a life support system operator. Stanford Runstom was born in completely unsheltered circumstances; his mother was an undercover detective for years, and when it came time for her to come back in, she opted to live out the next decade in a ship, honing her intelligence networks and staying on the move. Runstom was born in space, and his childhood home was this interstellar craft and the various ports and outposts it had occasion to visit; a life mirrored when he grew up to become a cop. Lastly, Dava was born on Earth, a planet on which human life has divided between plush arcologies and abject poverty. As a child, Dava lived underground until her parents won the “Earth Kin Rescue” lottery and were able to board an ark bound for the colonies. When Dava awoke from hypersleep, she’d become an orphan and was dumped into foster care in the domes. Her erratic upbringing eventually led her to crime.

As these three characters confront their immediate challenges and obstacles, they are distracted from identifying the real things they want for their own lives. But like a system that seeks equilibrium, they each unconsciously unveil their true internal goals. And they are surprised to find those goals have evolved from the obvious to something unexpected.

When Jax was a domer, he lacked drive and ambition. His only goal was to pay his bills. When the false accusation of murdering a block of residents under his watch forces Jax to become a fugitive, his immediate concerns become those of survival and freedom. He gets a taste of domeless life in an independent colony on the moon of a gas giant, and finds inspiration in the vibrancy, diversity, cooperation, and perseverance of the population. This manifests later when Jax is given the chance to do his part in protecting the colony’s way of life. It’s then that he realizes after all his trials, he doesn’t want to go back home to the domes, but instead wants to make a new home.

Runstom dedicated his life to the pursuit of justice, but had trouble advancing his career. Though he’d rather be a detective, he finds himself in a public relations role at the policing-for-hire company he works for. Respecting his mother’s need to stay under the radar, he maintains minimal contact with her. And yet, she sees all, and when they have a chance to be reunited, the stoically independent Runstom realizes how badly he misses his mother’s advice and love. Their separate and nomadic lives become much less bearable to him.

In and out of foster homes, Dava considered herself rescued when crime boss – and fellow ex-Earthling – Moses Down recruited her. From then on, she only concerned herself with being a good right hand to Down. He pushes her into leadership, and under his influence she tries her best. When she has to take the reins and decide what is best for the crime family, she realizes she wants to offer them something different. Moses Down brought the outcasts together and made them into a family, but Dava must find that family a place to call home.

And so the thing that unifies these three very different characters is that eventual goal to create a new home for themselves. Which explicitly means leaving previous notions of home behind, and recognizing the shadows of the past for what they are: merely shadows. This is the defining theme that I used to drive the character arcs through to the conclusion of the trilogy.

I was born in Saratoga, NY, near Albany. At the age of five, I was registered for kindergarten, but I would never attend that school; instead, my parents separated and we moved four hours away, to Elmira, NY. This was the first big shift in my sense of home, but I would spend the next twenty years in this small town. Finally, at the age of twenty-six, I’d had enough of Upstate and moved to Brooklyn in September, 2001. 9/11 came, and I was never able to make NYC my home. After six rough months of being unable to set roots into a disrupted city, I needed to escape from New York, and so I catapulted across the country to Oregon. Lacking in friends, family, and money, this is the part of my life I drew upon when thinking about what it means to learn how to make a home from scratch.

So the Big Idea here is that home is a malleable concept, and what you are born into is not necessarily what you are destined to call home. This became the core internal driver as I brought these three characters to the conclusion of this trilogy: they would each, in their own way, learn to define what home means to them.