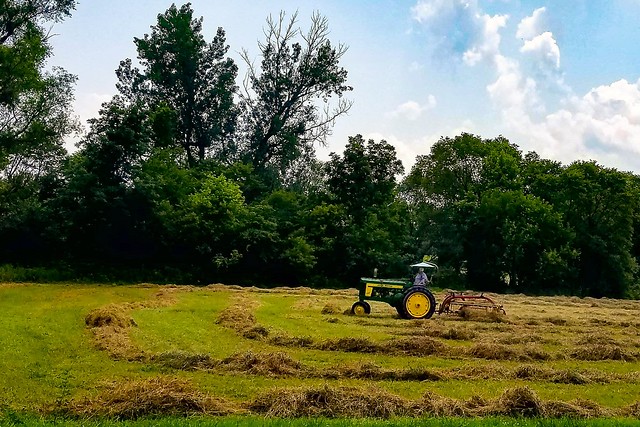 It’s not just an old proverb. It’s literally happening across the street from where I live.

And yes, I like it that I write about high-tech futures from a place where it’s not at all unusual to see a Mennonite woman bundling hay using a tractor that’s probably as old as I am, and that the hay will probably go to feed the horses that pull the Amish buggies around here. Welcome to rural Ohio, y’all. We have juxtapositions. 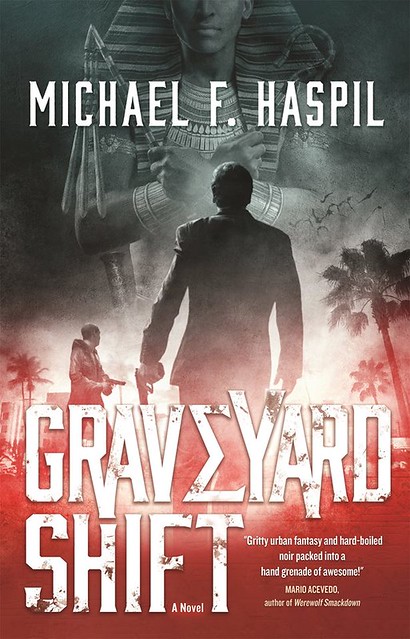 Getting older often gives you a perspective that younger people don’t have. But what happens when you’re immortal? What is your perspective then? It’s a question Michael F. Haspil has considered for his debut novel, Graveyard Shift.

As human beings, we tell ourselves fictions to make it easier to cooperate one with one another.

Sometimes, the fiction is noble. We are all equal and entitled to certain inalienable rights. This story only extends to imaginary lines drawn on a representative map, a different sort of fiction. After all, “We” doesn’t apply to “Them”.

Many times, the fiction is merely useful. This color of light means “go” and another color means “stop”. All drivers must drive on this side of the street. Pieces of paper have value and you can use them to barter for goods. When people stop trusting in those fictions, life becomes hazardous and disagreeable.

All too often, the fiction becomes a source of human polarization. The entertainment we criticize, others adore. The sports tribes we deride are idols to others even though we select them more often due to geography than anything else. Their ties are red, ours our blue, so they are immoral. We don’t understand the methods they use to heal; therefore, they are wicked. They have a different melanin content than we do; their lives aren’t worth as much as ours are. Our god is greater than theirs; therefore, they are evil.

It’s all about tribalism and defining the Other. We tell ourselves stories and then believe them to such an extent we can justify any action.

Viewed from the point of view of hypothetical immortals, or beings so long-lived that for all purposes they may as well be, the numbers of those who belong to their tribe shrink over time, until almost everyone they meet is the Other. Of what concern is any subject when humans change their minds or stop caring about them in a week, a month, a century?

Combine that idea with how many atrocities immortals might witness, as they become more and more detached from those fictions we humans tell ourselves. How many died because they followed the wrong leader? How many burned at the stake because of paranoia? How many mass graves? How many genocides? The immortals would tell themselves a new fiction. Humans don’t matter. They all die, some sooner than others.

As the immortals pass down through the centuries, the trolley problem breaks. Viewed on their timescale, what does it matter if everyone on the tracks dies? Their lives are so short, they are as good as dead anyway. Why should immortals trouble themselves with the lives of beings that end in a relative eye blink? Why should human morals matter? Or human laws? It’s not that immortals are more or less ethical than humans. It’s that over their eternal lives they tell themselves different stories. New fictions, humans aren’t equipped to understand.

Taken from the human point of view, these immortals inevitably become the Other. By comparison, our short lives would not afford us a window of understanding. Their decisions and justifications would be alien to us. What do fruit flies comprehend of human machinations?

In my novel, Graveyard Shift, some of my heroes are so long-lived they may as well be immortal and so they share part of the problems I’ve described. Added to their condition, they often make the difficult choices of committing a lesser evil to prevent a greater one. It is a slippery slope. How many times can one justify collateral damage in the name of the greater good before one becomes a new source of evil?

In many other stories, my heroes — a vigilante, a vampire, a shapeshifter, a mummy — would be the villains. As Nietzsche warns, “He who fights with monsters should look to it that he himself does not become a monster.” But when beings survive for millennia, becoming a monster, may be inevitable.

My characters aren’t nice people. On a good day, they are indifferent to the plight of the everyman. Often throughout the story, they do unpleasant things and they rationalize what they’ve done by convincing themselves it was a necessary evil to prevent something much worse. Most of the time, that’s true.

This was a bit of a struggle for me. How could I convey the apathy of immortals and still portray them as sympathetic heroes?

It ultimately came down to their motivations. The need for atonement drives many of my characters. They view their immortality and their continued service to humankind as a sort of penance for sins committed past and present.

It wouldn’t take much to flip the script and turn them into the true monsters other perceive them to be. This is what Matheson’s Richard Neville discovers at the conclusion of I Am Legend. Often, determining who is and who isn’t a monster, is solely based on the point of view and the fictions we tell ourselves.