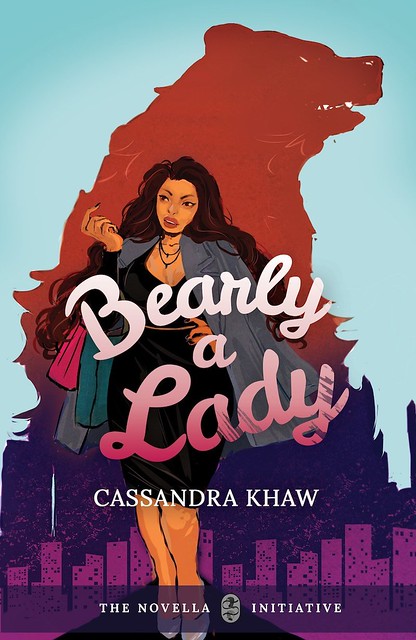 Identity issues can sometimes be a bear, as the protagonist of Bearly a Lady finds out — in no small part because author Cassandra Khaw experienced something similar in her real life.

Thing is, I don’t blame him.

Bisexual representation in media is a fraught topic. More often than not, bisexual people are characterized as wild, promiscuous individuals with thrilling sex lives, perpetually ready to jump into bed with whomever they find attractive. (Not necessarily untrue or even wrong, but that’s a conversation for another space.) Consequently, we end up with people like my ex, who begin quivering with lascivious curiosity the moment they so much as hear the hum of that first syllable.

But we are getting better at it. Crazy Ex-Girlfriend has one of my favorite bisexual characters of all times: Darryl Whitefeather, a middle-aged divorcee who comes out mid-season and proceeds to have a stunningly healthy relationship with his new boyfriend. (That show has its problems, but I will forever love the writers for making sure the queer couple is the happy one.) And genre writing is even further ahead in that department. Take Kai Ashante Wilson’s work, for example, which remarks on polyamorous queer relationships without even the barest breath of hesitation. After all, in a world of dragons and technical-minded gods, what is there to fear about a man who loves a man and also a woman?

With Bearly a Lady, I’m hoping to build on that canon. Zelda McCartney is a complicated character, for all that she might sometimes appear like an airhead. She’s been out for a long time; this isn’t a self-discovery story. Instead, the book, which goes into some dark places between the lines, interrogates the idea of expectations, labels, and toxic relationships.

And that is because she is a werebear in a human world, a woman endlessly bombarded by external forces, all looking to chip at her self-esteem for the sake of a quick buck or someone else’s emotional fulfillment. It’s no surprise that Zelda has only half an idea as to which box she belongs. Honestly, a lot of people don’t figure that out. Especially those raised outside of liberal communities.

I’d know. For the longest time, that was me.

(Except for the werebear part.)

So, that’s one of the Big Ideas behind Bearly a Lady. I wanted my main character to be full of internal conflict, certain in her identity but uncertain of the words that one might use to define oneself. A mess of paradoxes and imperfections glued together by bad sitcoms and ice-cream. I’m hoping that, one day, Bearly a Lady might be part of some bisexual teenager’s library, another piece in the puzzle as they figure out who they are. Maybe, Zelda will be an example of who they hope not to be. Maybe, they’ll see a bit of themselves in her. Who knows? That’s not up to me.

Bearly a Lady might be a queer paranormal rom-com with werebears, vampires, and billionaire fairies galore, but it’s also a look into the life of a queer woman who doesn’t always get it straight.

← Making Hay While the Sun Shines
Getting Lucky With College Costs →