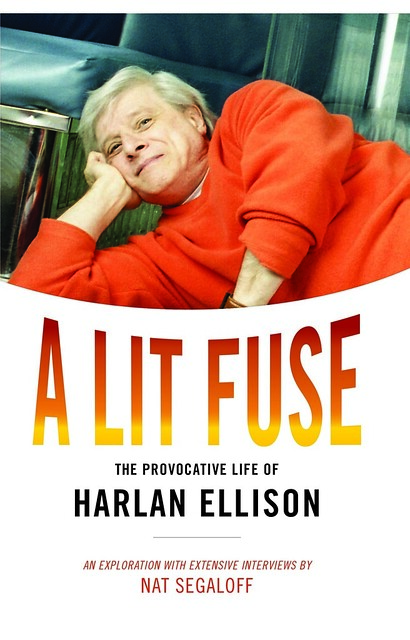 When biographer and historian Nat Segaloff sat down to interview science fiction Grand Master Harlan Ellison for his new book A Lit Fuse, he knew that he was in for a challenge. What surprised him about the process was how much it wasn’t just about Ellison, but also about him.

How do you write something new about someone everybody thinks they already know? A writer who is famous for putting so much of his life into his stories that his fans feel that even his most bizarre work is autobiographical? That was the unspoken challenge in late 2013 when I agreed to write Harlan Ellison’s biography, an adventure that is just now seeing daylight with the publican of A Lit Fuse: The Provocative Life of Harlan Ellison.

I wrote the book because Harlan wouldn’t. He came close in 2008 when he announced he would write Working Without a Net for “a major publisher,” but he never did. Maybe he figured he’d said enough in his 1700 short stories, essays, and articles he’s published over the last 60 years. It wasn’t as if he was afraid of the truth; he always said he never lies about himself because that way nobody can hold anything against him. That was my challenge.

When we shook hands and I became his biographer, I also became the only person he ever gave permission to quote from his work and take a tour of his life. What I really wanted to do, though, was to explore his mind. What I didn’t expect was that, as I examined his creative process, I would also bare my own.

A Harlan Ellison interview is a performance. He will be quotable, precise, vague, and outrageous. He takes no prisoners. He will run and fetch a comic book, figurine, photograph, or book to illustrate a point, all of which breaks the mood. My job was to get him to sit still and not be “Harlan Ellison” but simply Harlan.

Harlan is one of the few speculative fiction writers (along with Ray Bradbury, Isaac Asimov, and a handful of others) who became public figures. Part of this stemmed from the quality of his work but much of it was created by his being, as I kept finding in the clippings, ““fractious,” “famously litigious,” and “argumentative.” Indeed, most of the stories I found during my research could be divided into two categories: “What a wild man Harlan is” and “I alone escaped to tell thee.”

Balderdash. What I discovered was a man who takes his craft seriously and fiercely defends others who labor in the field of words. An attack on them was an attack on him, and an attack on him was not to be deflected but returned in kind. “I don’t mind if you think I’m stupid,” he told one antagonist, “it’s just that I resent it when you talk to me as if I’m stupid.”

Even though I had final cut, I ran whole sections past him to get his reaction. He never flinched. In fact, he challenged me to go deeper. It was almost as if – and don’t take this the wrong way – I was Clarice Starling and he was Hannibal Lecter — the more I asked of Harlan, the more I had to give of myself. Both of us put our blood in the book even though I am the author.

← Getting Lucky With College Costs
Agent to the Stars, 20 Years On →