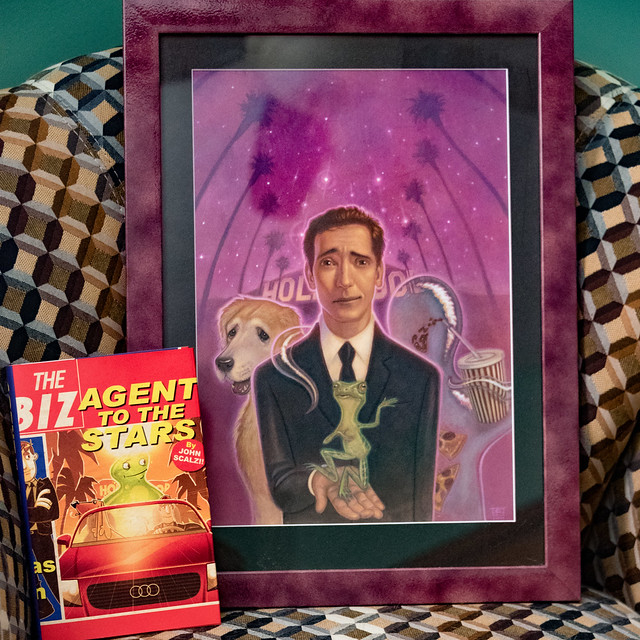 So, on July 21, 1997, which was a Monday, I posted the following on the alt.society.generation-x newsgroup:

96,098 words, cranked out in a little under three months, working
mostly on weekends, grinding out 5,000 words at a sitting.

a) I *can* carry a story over such a long stretch;

b) like most things on the planet, thinking about doing it is a lot
worse than simply sitting down and doing it. The writing wasn’t hard
to do, you just need to plant ass in seat and go from there.

I did find it helped not to make my first novel a gut-wrenching
personal story, if you know what I mean. Instead I just tried to write
the sort of science fiction story I would like to read. It was fun.

Now I go in to tinker and fine tune. Will soon have it ready for beta
testing. Be afraid. Be very afraid.

That novel? Agent to the Stars. Which means that today is the 20th anniversary of me being a novelist. Being a published novelist would have to wait — I date that to January 1, 2005, the official publication date of Old Man’s War — but in terms of having written a full, complete (and as it eventually turned out, publishable) novel: Today’s the day.

I’ve recounted the story of Agent before but it’s fun to tell, because I think it’s a nice antidote to the “I just had to share the story I’d been dreaming of my whole life” angle first novels often take. The gist of the story was that my 10-year high school reunion was on the horizon, and having been “the writer dude” in my class, I knew I would be asked if I had ever gotten around to writing a novel, and I wanted to be able to say “yes.” Also, I was then in my late 20s and it was time to find out whether I could actually write one or not.

Having decided I was going to write one, I decided to make it easy for myself, mostly by not trying to do all things at once. The goal was simply: Write a novel-length story. The story itself was going to be pretty simple and not personally consequential; it wasn’t going to be a thinly-disguised roman a clef, or something with a serious and/or personal theme. It would involve Hollywood in some way, because I had spent years as a film critic and knew that world well enough to write about it. And as for genre, I was most familiar with mystery/crime fiction and science fiction/fantasy, so I flipped a coin to decide which to do. It come up heads, so science fiction it was, and the story I had for that was: Aliens come and decide to get Hollywood representation.

I remember the writing of Agent being pretty easy, in no small part, I’m sure, because of everything noted above — it wasn’t meant to be weighty or serious or even good, merely novel-length. When I finished it, I do remember thinking something along the lines of “Huh. That wasn’t so bad. Maybe I should have done this earlier.” In the fullness of time, I’ve realized that I probably couldn’t have done it any earlier, I wasn’t focused enough and it helped me to have some sort of external motivation, in this case, my high school reunion.

Once finished, I asked two friends and co-workers at America Online to read the book: Regan Avery and Stephen Bennett, both of whom I knew loved science fiction, and both of whom I knew I could trust to tell me if what I’d written was crap. They both gave it a thumbs up. Then I showed it to Krissy, my wife, who was apprehensive about reading it, since if she hated it she would have to tell me, and would still have to be married to me afterward. When she finished it, the first thing she said to me about it was “Thank Christ it’s good.” Domestic felicity lived for another day.

And then, having written it… I did nothing with it for two years. Because, again, it wasn’t written for any other reason than to see if I could write a novel. It was practice. People other than Regan and Stephen and Krissy finally saw it in 1999 when I decided that the then brand-new Scalzi.com site could use some content, so I put it up here as a “shareware” novel, meaning that if people liked it they could send me a dollar for it through the mail. And people did! Which was nice.

It was finally physically published in 2005, when Bill Schafer of Subterranean Press published a limited hardcover edition. I was jazzed about that, since I wanted a version of the book I could put on my shelf. The cover was done by Penny Arcade’s Mike Krahulik, who among other things knew of the book because I was one of Penny Arcade’s very first advertisers way back in the day, advertising the Web version of the book (those guys have done okay since then). Then came the Tor paperback edition, and the various foreign editions, and the audiobook, and here we are today.

When I wrote the novel, of course, I had no idea that writing it was the first step toward where I am now. I was working at America Online — and enjoying it! It was a cool place to be in the 90s! — and to the extent I thought I would be writing novels at all, I thought that they would be sideline to my overall writing career, rather than (as it turned out) the main thrust of it. This should be your first indication that science fiction writers in fact cannot predict the future with any accuracy.

I’m very fond of Agent, and think it reads pretty well. I’m also aware that it’s first effort, and also because it was written to be in present time in the 90s, just about out of time in terms of feeling at all contemporary (there are fewer and fewer Holocaust survivors remaining, to pick just one obvious example in the book). At this point I suggest people consider it as part of an alternate history which branched off from our timeline in 1998 or thereabouts. Occasionally it gets talked about for being picked for TV/film. If that ever happens, expect some extensive plot revisions. Otherwise, it is what it is.

One thing I do like about Agent is that I still have people tell me that it’s their favorite of mine. I like that because I think it’s nice to know that even this very early effort, done simply for the purpose of finding out if I could write a novel, does what I think a novel should: Entertains people and makes them glad they spent their time with it.

I’m also happy it’s the novel that told me I could do this thing, this novel-writing thing, and that I listened to it. The last couple of decades have turned out pretty well for me. I’m excited to see where things go from here.