Win This ARC of “Don’t Live For Your Obituary” 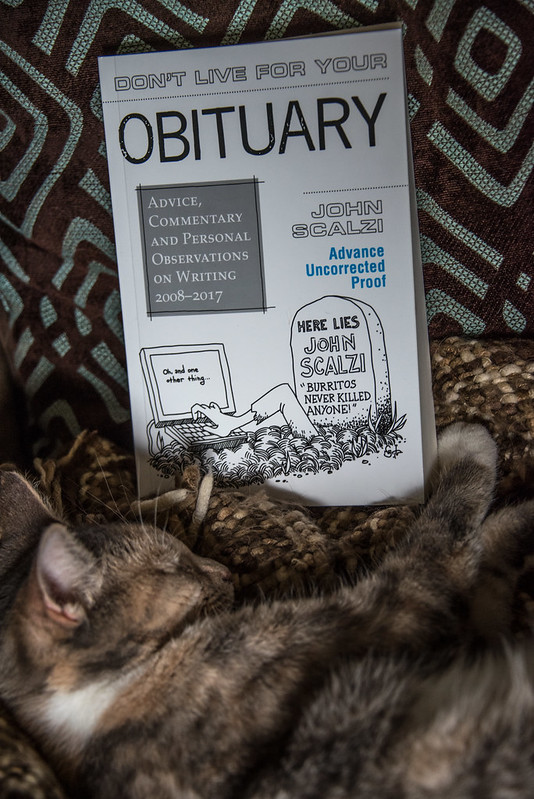 Here’s Sugar curling up with a good book, in this case the ARC of Don’t Live For Your Obituary, my upcoming collection of essays about writing and the writing life, which comes out in December from Subterranean Press. And you can win it! Here’s how:

Tell me in the comments which Beatles song I am thinking of right now.

The person who correctly guesses which Beatles song I am thinking of wins. In the case where more than one person correctly guesses, I will number the correct guesses in order of appearance and then use a random number generator to select the winner among them.

Guess only one song. Posts with more than one guess will have only the first song considered. Posts not related to guessing a song will be deleted. Also, only one post per person — additional posts will be deleted.

This contest is open to everyone everywhere in the world, and runs until the comments here automatically shut off (which will be around 3:50pm Eastern time, Sunday, July 23rd). When you post a comment, leave a legit email address in the “email” field so I can contact you. I’ll also announce the winner here on Monday, July 24. I’ll mail the ARC to you, signed (and personalized, if so requested).

Also remember you can pre-order the hardcover edition of Obit from Subterranean Press. This is a signed, limited edition — there are only 1,000 being made — and they’ve already had a healthy number of pre-orders. So don’t wait if you want one.

Now: Guess which Beatles song I am thinking of! And good luck!