My Morning in My Bedroom With Strange Men, a Tale From Twitter

Men in my bedroom. With drills.

Bedroom update: Now we have brought in the vacuum. The sucking has begun.

Bedroom update: Things that had been previously wrapped in plastic have been unwrapped.

Bedroom update: Measuring tapes have been brought out.

Bedroom update: Lots of grunting and wondering if certain things will fit in the spaces where they are desired.

Bedroom update: Informed the men at that least three more inches are required.

Bedroom update: The men left. I'm pleased with the service I was given.

On the new bed they installed. 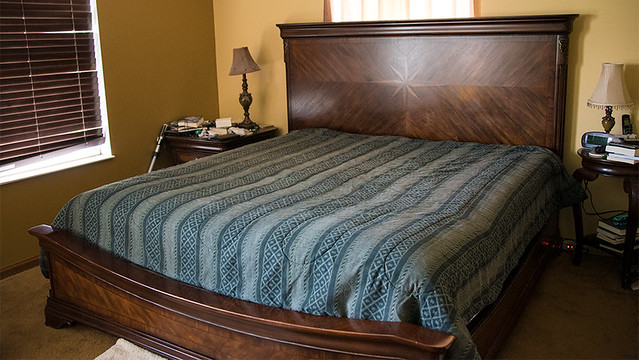 Which you may think looks quite a lot like the old bed, and you wouldn’t be wrong, in the sense that we did not swap out the headboard or bed frame. But those of you who are sharply observant and/or are creepy creepers might note the mattress is taller than it used to be. That’s because instead of a box spring underneath we now have a frame that raises and lowers the head and foot of the mattress when desired. That’s right, no longer do we have to sit up in bed on our own! Our bed can do it for us! Surely we live in miraculous times.

It was time to get a new mattress in any event. The last time we purchased one for this bed was 11 years ago, and it had gotten to the point where the “memory foam” had lost its memory entirely and both Krissy and I were getting backaches out of it. Once at the store and finding a mattress we liked, we decided to splurge a bit and get the motorized frame. If nothing else it will make everything weird for the cats. Which is its own benefit. Also, if it turns out that elevating the head of the mattress makes it easier to type, I may finally go full Grandpa Joe and never leave the bed at all. Note to self: Check Amazon for bedpans.

(Additional note to self: Really, don’t.)

And I got some saucy tweets out of it! Which, you know. Is its own reward.

← The Winner of the “Obit” ARC Contest
The Big Idea: Tal M. Klein →

27 Comments on “My Morning in My Bedroom With Strange Men, a Tale From Twitter”