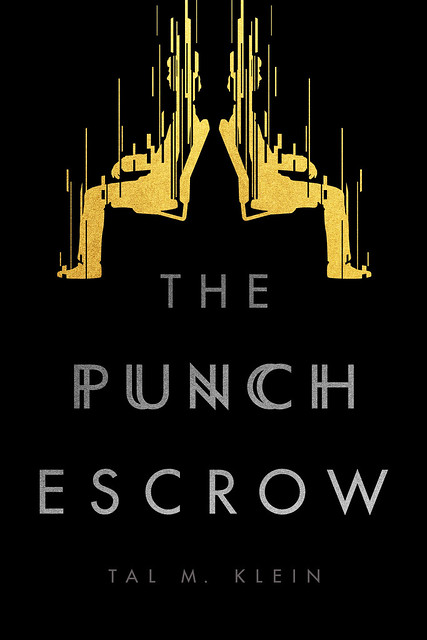 Teleportation: A great idea, but with some practical… problems. It’s a physics thing. In this Big Idea for The Punch Escrow, author Tal M. Klein wonders, what if you could solve those problems, not with physics, but with another branch of human intellectual endeavor entirely?

F#*%ing transporters, how do they work?

It was the Ides of March of 2012. I had just started a new job and was chatting with a co-worker about lens flare. Specifically, I was ranting about J.J. Abrams’ penchant for gratuitous lens flare, using the Star Trek reboot as an example, when all of a sudden the conversation was interrupted by our CEO.

(He wasn’t talking about the lens flare.)

Our CEO wielded a PhD in Computer Science and was using it to fight with Star Trek, or more specifically its transporters. He went on to monologue about Heisenberg’s uncertainty principle, explaining that the position and the velocity of an object couldn’t both be measured exactly, at the same time, even in theory, and in the highly improbable likelihood that somehow someone did manage to circumvent the uncertainty principle, they’d still have to contend with the no-cloning theorem, which stated that it was impossible to create an identical copy of any unknown quantum state.

Here is what I heard: “Teleportation is impossible because physics.”

Now let’s be clear, I’m not a scientist. What I am is a product man. I build and market technology products for a living. Having bet my career on startups, my brain senses opportunity where others see impossibility. In fact, whenever anyone tells me I can’t do something, my mind automatically appends a “yet” to the end of their statement.

My favorite author growing up was Larry Niven. This fact is germane here because the first thing that came to mind during the CEO’s aforementioned monologue was a Niven essay entitled Exercise in Speculation: The Theory and Practice of Teleportation, part of a collection called All The Myriad Ways. Niven’s spiel on teleportation explored the pros and cons of the myriad ways (see what I did there) we might achieve commercialized human teleportation. The science was interesting, but what I remembered latching on to as a kid was his take on the anthropological impact of teleportation.

Niven’s itch was akin to what angered my CEO: If we discount for Star Trek’s technobabble and defer to actual physics, then every time Scotty teleported Captain Kirk he was actually killing him in one place and “printing him out” somewhere else.

This destructive teleportation variant of the twin maker trope has been explored almost ad nauseum. Though there are several good stories and movies that address the existential problems teleportation could introduce should it ever become a viable transportation mechanism, none have adequately presented a marketable solution to that problem — at least none that might pass muster with an anthropologist.

How come nobody ever discussed how society might come to adopt teleportation in the first place, I wondered. Science fiction seemed to lack a scientifically plausible teleportation mechanism that could be deemed safe enough to commercialize in the near future.

So, I decided to solve the teleportation problem — with marketing!

In my day job as a chief marketing officer, when I’m asked to play out this kind of go-to-market strategy problem, I use a game theory methodology known as Wardley mapping; an augmentation of value chain mapping. The “product” came in the form of the Punch Escrow. It’s the MacGuffin that makes teleportation safe and thus both scientifically and anthropologically plausible. The value of mapping in predicting the future is based in pragmatism. If we can assess what components of tech will become commoditized in society, we can envision innovations that build on those commodities in alignment with basic needs, making their commercialization more plausible.

Consulting with a real life quantum physicist, I used the Wardley mapping approach to understand the teleportation problem and then solve for it: When someone teleports, the Punch Escrow is a chamber in which the they are held — in escrow — until they safely arrive at their final destination. That way if anything goes wrong during teleportation, the “conductor” could just cancel the trip and the traveler would safely walk out at the point of origin as if nothing happened.

But how does one market this scenario given the very obvious twin maker issue?

A capitalist society will always want to get from point A to point B faster and on-demand. I don’t think anyone would argue that safe teleportation is a highly desirable mode of transport. The Punch Escrow makes it possible, and International Transport (the company behind commercial teleportation in the 22nd century) effectively brands it as “safe.” To wit, critics of early steam locomotives avowed that the human body was not meant to move faster than fifty miles an hour. Intelligent people with impeccable credentials worried that female passengers’ uteruses might be ejected from their bodies as trains accelerated! Others suspected that a human body might simply melt at such speeds. You know what? It didn’t matter. People wanted to get from point A to point B faster, train tycoons marketed to that desire with implied underpinnings of safety, and trains took off.

Just as locomotives didn’t transform our world into a dystopia, it stands to reason teleportation won’t either. Yes, people die in train accidents (not because their organs fly out of their orifices, I should add), but the benefit is anthropologically perceived as greater than the risk. Same goes with commercial flight. Of course you’ve heard the axiom, “If God had meant man to fly…” — that didn’t seem to stop droves of us from squeezing into small flying metal tubes in the sky. Today, we face similar fears with autonomous vehicles, but I’m certain that the marketers will calm our nerves. I believe within a generation the notion of manual driving will seem as esoteric a means of getting around as a horse and carriage. Maybe the same will be said of teleportation a century from now?