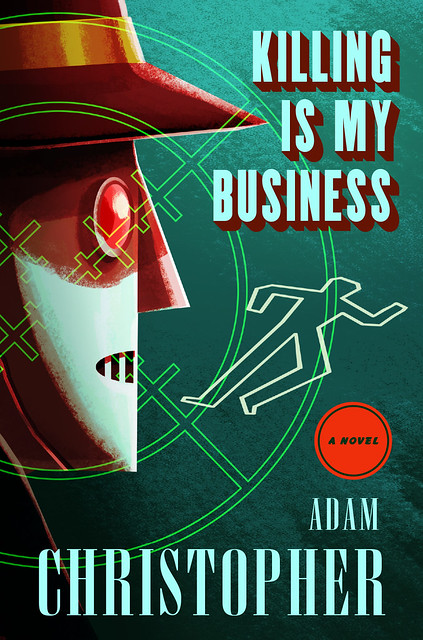 Congratulations! Your book was a success! Now do that trick a second time! In discussing Killing is My Business, author Adam Christopher talks about doing the thing that you did so well all over again — but different this time.

You know how it goes, the difficult second album: a band spends years meticulously crafting a collection of songs, polishing them through endless live sets until they shine, and these songs form their incandescent debut album.

Then they need to produce the follow-up and essentially come up with an entirely new repertoire on demand. That second album can be a difficult one indeed.

Now, I didn’t spend years crafting the Ray Electromatic Mysteries – Made to Kill, the first full-length novel after the Tor.com novelette Brisk Money, came out in 2015 and was something like my seventh published novel – but somehow the series has a certain kind of weight, just like that debut album of your favourite band. I think it’s because that original big idea was very big indeed – I was writing Raymond Chandler’s lost science fiction epics, a series about a robot assassin working in Chandler’s near-future Hollywood of 1965. That idea sprang from Chandler’s own letter to his agent in 1953, in which he complained about sci-fi, saying “people pay brisk money for this crap?” Clearly, this was a front, the famed hardboiled author conducting a fishing expedition, seeing if his agent would bite.

Sixty years later, I wrote a story named for Chandler’s letter – Brisk Money. The idea was everything – a whole world was open to me, enough not just for a novelette but for a trilogy of hardboiled novels and another in-between novella, Standard Hollywood Depravity – the title, again, taken from Chandler’s letters.

So far, so good. Made to Kill was a blast to write.

And then came book two.

I wouldn’t call it a sophomore slump. Far from it. The three novels were pitched together, right from the start, so I knew what I was doing and where the books were going. But there was one thing in back of my mind while I was working on what became the second novel, Killing Is My Business.

What would Raymond Chandler do?

That mantra, in essence, became the big idea of the book.

The concept of the Ray Electromatic Mysteries is simple: the robot revolution came and went in the 1950s, and Ray is the last robot left in the world, designed to be a private eye working in Hollywood. The only snag to this is that his supercomputer boss, Ada, was programmed to make a profit – and she quickly figured out you could make more money by killing people than finding them. A little tinkering with Ray’s CPU and Ada turns him into an accomplished hit-robot.

Simple enough, and, importantly, an open-ended concept. You could write a hundred stories about a hitman.

Which was actually the problem – because while I could easily write endless hardboiled, noir-ish stories set in Chandler’s seedy LA underbelly, a world full of wiseguys and dames and crooked cops and the mob, that’s nothing that hasn’t been seen before a thousand times. Hell, that’s basically Chandler’s oeuvre and people have been calling him a genius or a hack for the last seventy-plus years.

No, what I had to do was to write science fiction. There was no point in Ray being a robot if that wasn’t vital to the story. Ray had to be the central player in the trilogy – he’s unique, literally, and that has to drive the story arc that stretches across all three books.

So: what would Raymond Chandler do?

More specifically, what would Raymond Chandler do… with a robot?

In Killing Is My Business, Ray’s unique character is used to rather unsubtle effect when he uses his virtually indestructible chassis to protect a mob boss from a drive-by shooting, literally placing himself between the crime lord and his would-be executioners. This is something that only Ray could do. It’s a key scene, the first piece of the story that I had thought of.

And it was also a scene that I knew had to happen – if Ray is a robot then being a robot is the story. With that thought foremost in mind, I could write book two and I could make sure the series as a whole is more than just a set of pastiche crime novels, it was something original.

Now, if he only Ray Electromatic knew what I torment I had in store for him in book three…